Adventures in the Skin Trade is a walk-in tableau- a mix of pastoral promise rigged with the artifice of a staged event. As in the landscapes of Jeff Wall, such as Dead Troops Talk, 1992 or The Well, 1989 or Gregory Crewdson’s Untitled 1997, the objects within Michelle Lopez’s world take on an everyday normalcy, appearing natural and unaltered. In her exhibition at Fondazione Nicola Trussardi, she fuses city and wilderness to exonerate the pastoral, using the enclosed garden to condense and expose counter-narratives. Lambert, a work in beige and white ponyskin, is clandestine, though it gently and persistently extends a strange nozzle in an act of friendship. Heard Rib, in editions of beige ponyskin and also deerskin, combines the weaponry of a shield with the suppleness of an ancient form. While Ye Old But Her, the largest piece in the exhibition, in cowskin leather, feels like it’s been hurled down to earth by the gods. Its bulbous figure appears compliant and ready to hatch, but the compression of its energy indicates a private and estranged turbulence. The sculptures are equally unfolding and suppressed, offering the emphatic directness of Bernini mixed with the sealed off site-specific works of Rachel Whiteread, such as House, 1993 or Ghost, 1990 here retrieval of the past is denied. The trickery in Adventures in the Skin Trade comes in the form of leisure as Lopez sends the viewer into an ambiguity that purposefully undermines and inverts the act of looking.

Collaborating with Trussardi’s expert craftspeople, Lopez is able to create an elegant amalgam of leather and ponyskin fur following forms she first casts in fiberglass. The result is a stunning act of disallowing the familiar, try as the viewer will to recognize and conventionalize the sculpture Lopez manifests. Working in leather requires a high standard of precision and discretion. This has certainly always been true of Michelle Lopez’s relationship to her drawings and sculpture.

In altering the act of visual participation Michelle Lopez encourages the viewer to not understand. Understanding being the device of the rational, non-visual realm. 'The device of not understanding was widely employed in the 18th century to expose feudal unreasonableness.' And so it is, that the rogue delays the ties that bind him to real life, avoiding the antidote to hovering as Lopez leaves the viewer no choice but to hop in."

"Deitch Projects presents Adventures in the Skin Trade, an exhibition of leather sculpture by Michelle Lopez. The work was produced in collaboration with The Fondazione Nicola Trussardi, using leather and fur from Trussardi's workshops. The exhibition had its initial showing at the Fondazione Trussardi in Milan this summer.

Lopez worked with leather as a surrogate for human skin. Her new sculptures were fleshy 'creatures' of familiar yet curious shape. They implied embryonic and other human-like forms, reminiscent of strange children's cartoons. The leather skin was a metaphor for simultaneous protection and exposure. It was both sensuous and tough.

The title of the exhibition came from Dylan Thomas's picaresque novel, which implied mischief, mystery, and the illicit. The poet's intention for his only novel was to create a character who would not only experience all types of absurd 'skins' but shed them as well, metaphorically, until the end when he would find himself naked.

Like the novel, all of the work was mysterious, unfolding its peculiar narrative. The exhibition evoked adventure by being playful, strange, and inviting to the touch while exploiting leather's sensuality.

Also in the exhibition is a Public Art Fund commission, Woadsonner, a 'found automotive chassis 'turned' into a sensual sci-fi cruiser.' The piece became a part of the plot as the transport or nest of all of these creatures." 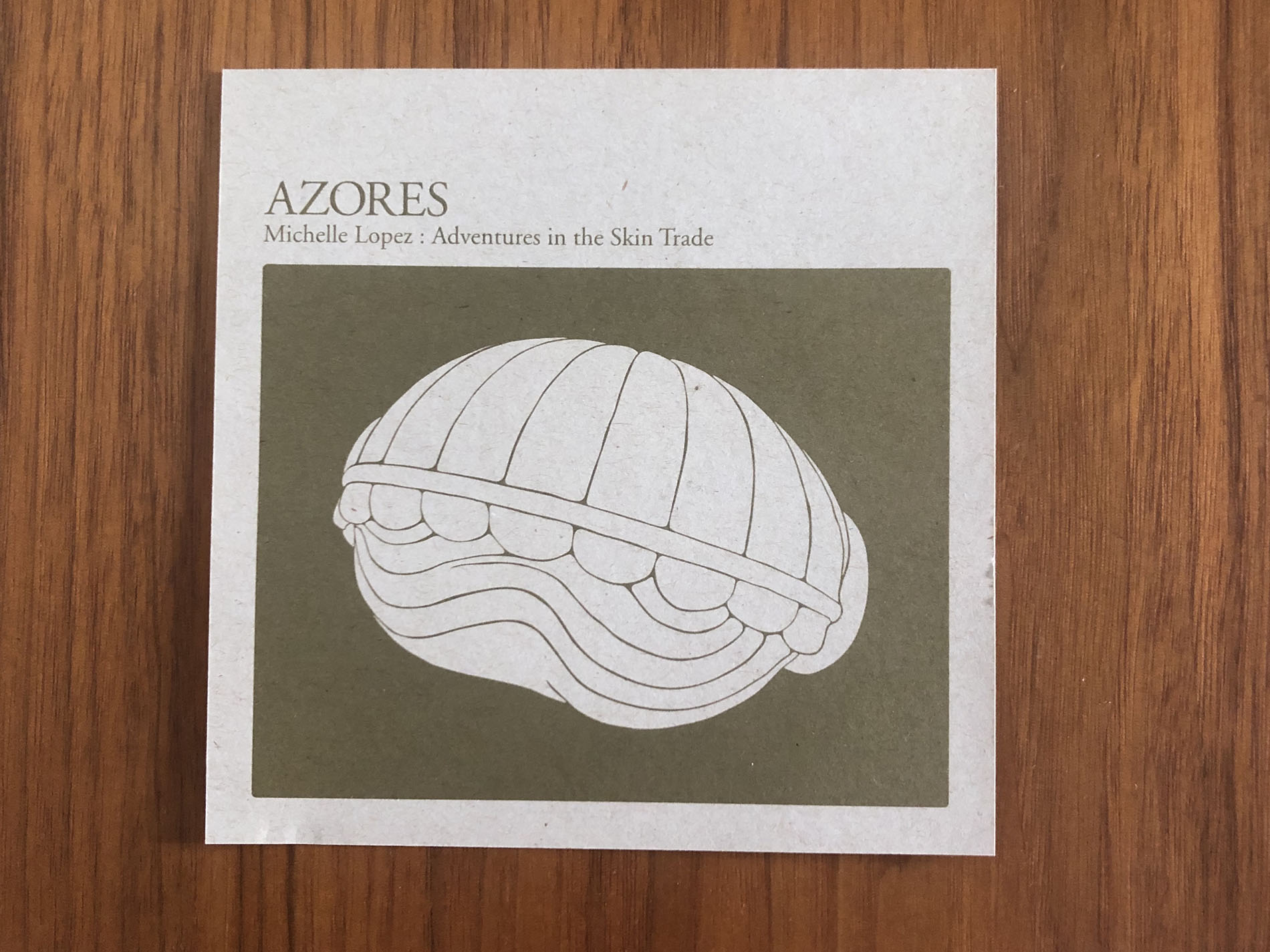 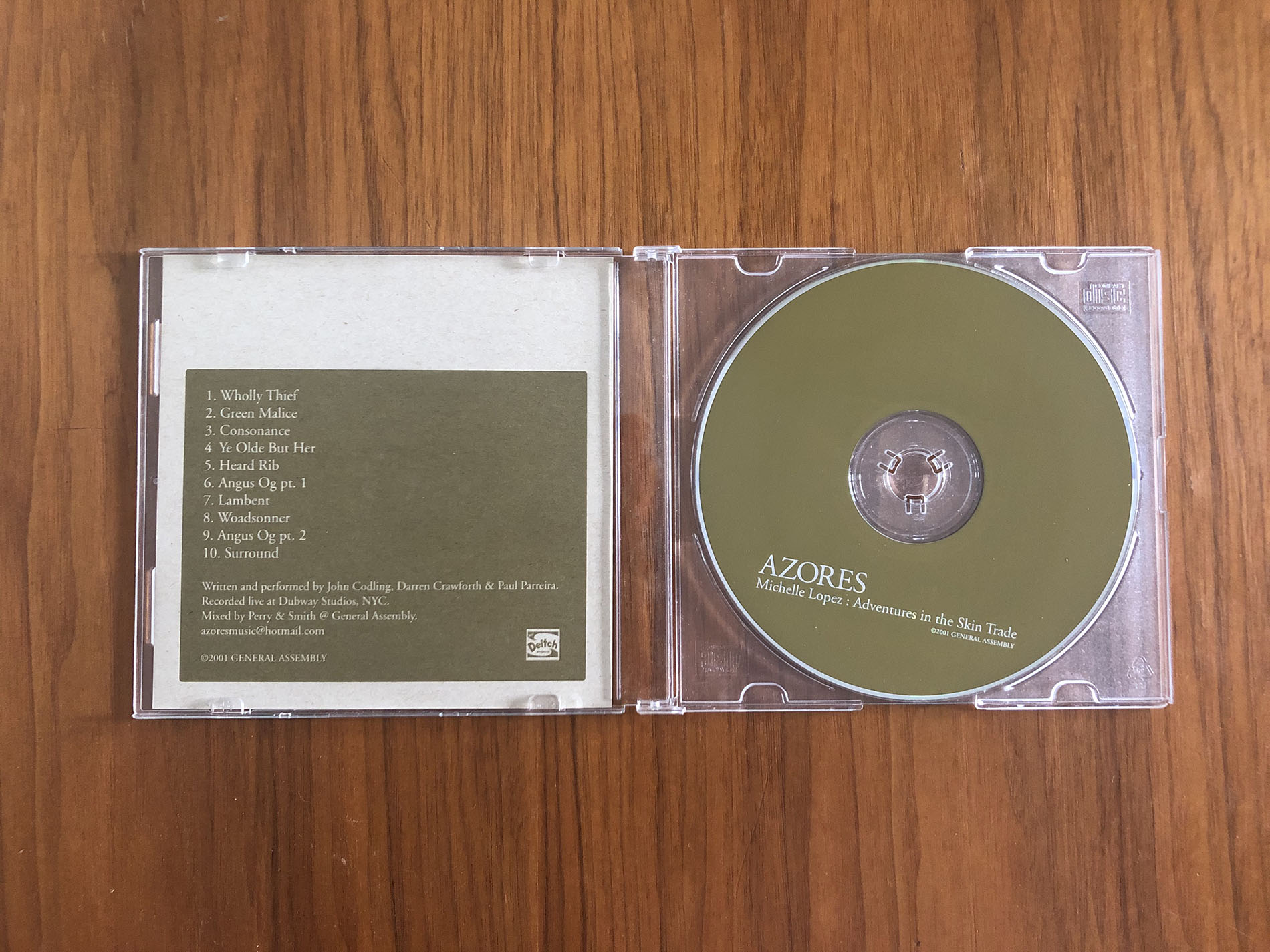 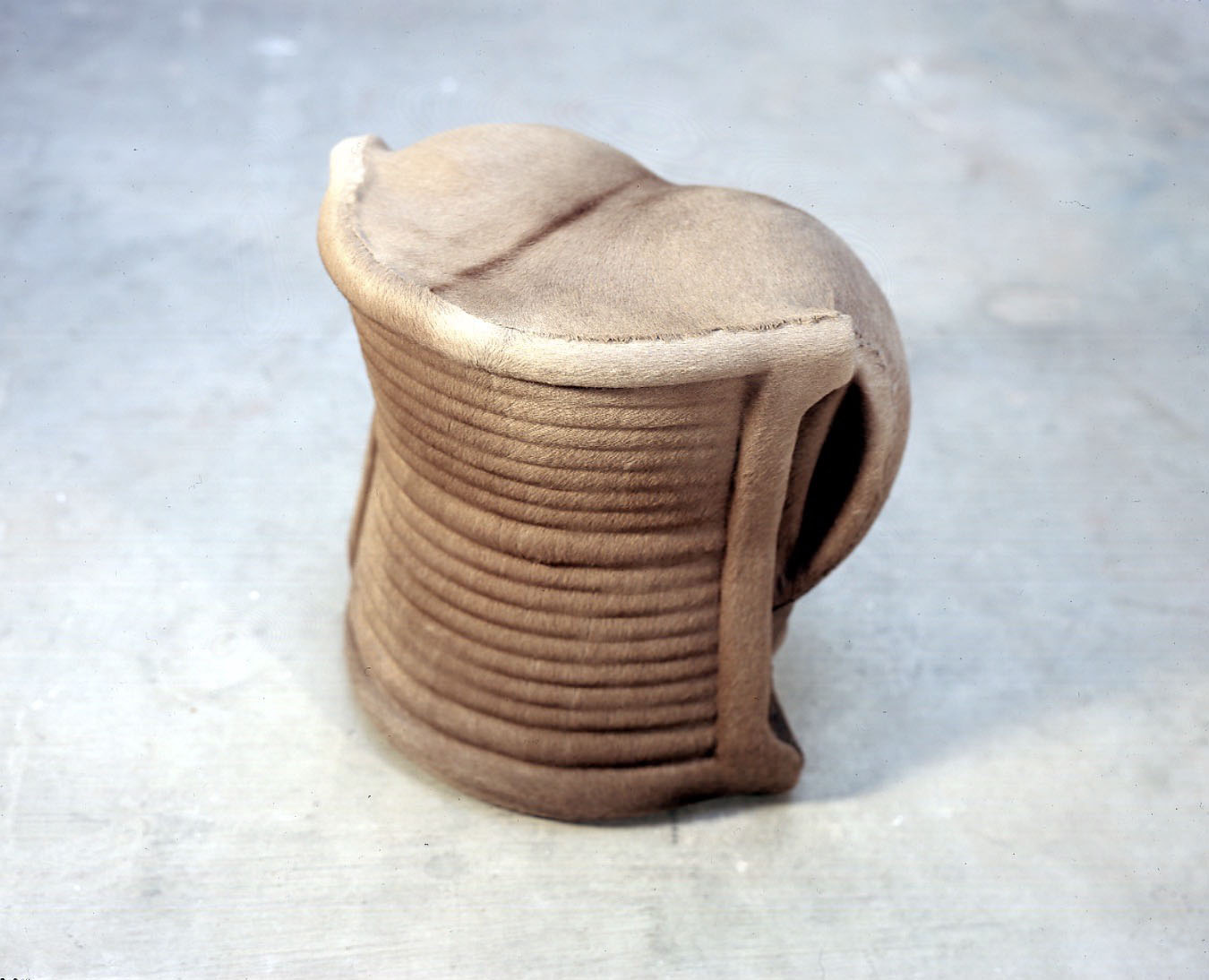 In 1998 I rented a small room in a loft of RISD architects and artists who were organizing exhibitions at 407 W. 14th Street. My studio was a few doors down (later it would become the Apple Store in the Meatpacking district). Soon after I moved in, 407 became the headquarters for ORFI (Organization for Returning Fashion Interest) and I got involved with helping them make leather pieces for their runway shows. It was an anti-fashion fashion organization. Those involved were Donald Hearn, Scott Kruger, Ana Gonzales, Greg Foley, Christian Brown, Benjamin Liu. Fast-forward: I did a few leather projects independently (Boy and Woadsonner, "Leather" exhibition at Deitch Projects) and also one with Trussardi Foundation that culminated in Adventures in the Skin Trade in Milan (Spring 2001) and then NY (Fall 2001). We transported several tons of sand to fill the space for the installation. I also asked Paul Parreira (Azores) and his friends to create a soundscape for the installation.

What we didn’t realize is that this would become the stage for planes to crash into the World Trade Center as we were installing. I said to Deitch that I would rather postpone the show for a year, and his response was that he wasn’t sure if NY would even exist a year from now. This was how unstable conditions were, much like the pandemic today. We did open on September 22 very somberly. ORFI organized a fashion show in the installation one evening.

Weirdly the sound recording and the sand were appropriate war trenches for these leather pieces to inhabit and confound in the moment we were processing the WTC dust settling.

"In 2001, I had a solo show at Deitch Projects the week of 9/11 when the Twin Towers crumbled before all New Yorkers’ eyes. This proved a pivotal moment,fundamentally altering my thinking towards a more introspective and socially-conscious point of view. I arrived at a spiritual crisis in object-making, and wanted to expand not just in material but conceptual scope."

ML: Adventures of the Skin Trade, an exhibition that I did at Deitch Projects (2001), explored the notion of how this skin [leather] can create a mask, protect objects, and protect identity.... The Deitch exhibition opened during 9/11, and the sand felt like war trenches. The leather sculptures, including the sportscar, Woadsonner, which was part of an installation with Public Art Fund, were conceptual appropriations of objects layered into each other to make a kind of pop abstraction. The work was in some way a moment of crisis for me. I was responding to the leather-covered car Boy, the easiness of it-- the cleverness of the cultural appropriation-- by examining what it would mean for me to investigate formalism. And 9/11 made the work irrelevant. I really had to question what I was all about. I moved to the West Coast to teach and work at Berkeley. It was a moment of assessing what it really meant to be making art. 9/11 tore me down, and so all the work after that was tearing things apart, crashing, breaking down.