"Andreas Grimm and Adrian Rosenfeld are pleased to announce Exit Music (for a film),a group exhibition and book curated by Michelle Lopez at both Grimm Rosenfeld locations. The catalog for the exhibition features interviews with participating artists along with special interviews with the Wrong Gallery and Wim Delvoye.

Exit Music brings together two groups of artists who challenge what the curator sees as a 'crisis of content' in the theater of contemporary art. In her essay Lopez argues that perhaps all this 'talking' about artworks has led artists away from pursuing the innate resonance of art-objects, and has ultimately resulted in an imbalanced experience for the viewer of the objects themselves. The title for the exhibition, borrowed from a Radiohead song of the same name, serves as a metaphor for the resonance a viewer takes with her after experiencing a successful work of art.

The fifteen artists Lopez has chosen switch genres and reward attention to process as well as to the resulting objects. Despite a broad range of styles and mediums, the chosen artists have one thing in common: their work is able to sustain the afflictions of criticism and interpretation while continuing to yield a multivalent dialogue with the viewer. Here, says Lopez, is an example of language becoming part of the work, without becoming the work itself. To this end, the artist interviews in the catalog provide an unexpected glimpse at the artists' ways of making, both object and meaning.

Michelle Lopez is a New York based artist and curator. Her work has been shown around the world in venues as diverse as PS1 and the Fondazione Nicola Trussardi in Milan. In 2002 she received the Art In America Best Public Art Award. She has taught at Columbia University, NYU and the University of California at Berkeley, where she was head of the sculpture department; she is now part of the School of Visual Arts graduate faculty in the MFA program.Michelle Lopez will have a solo exhibition curated by Lauri Firstenberg at LA><ART in Los Angeles in the Spring of 2008." 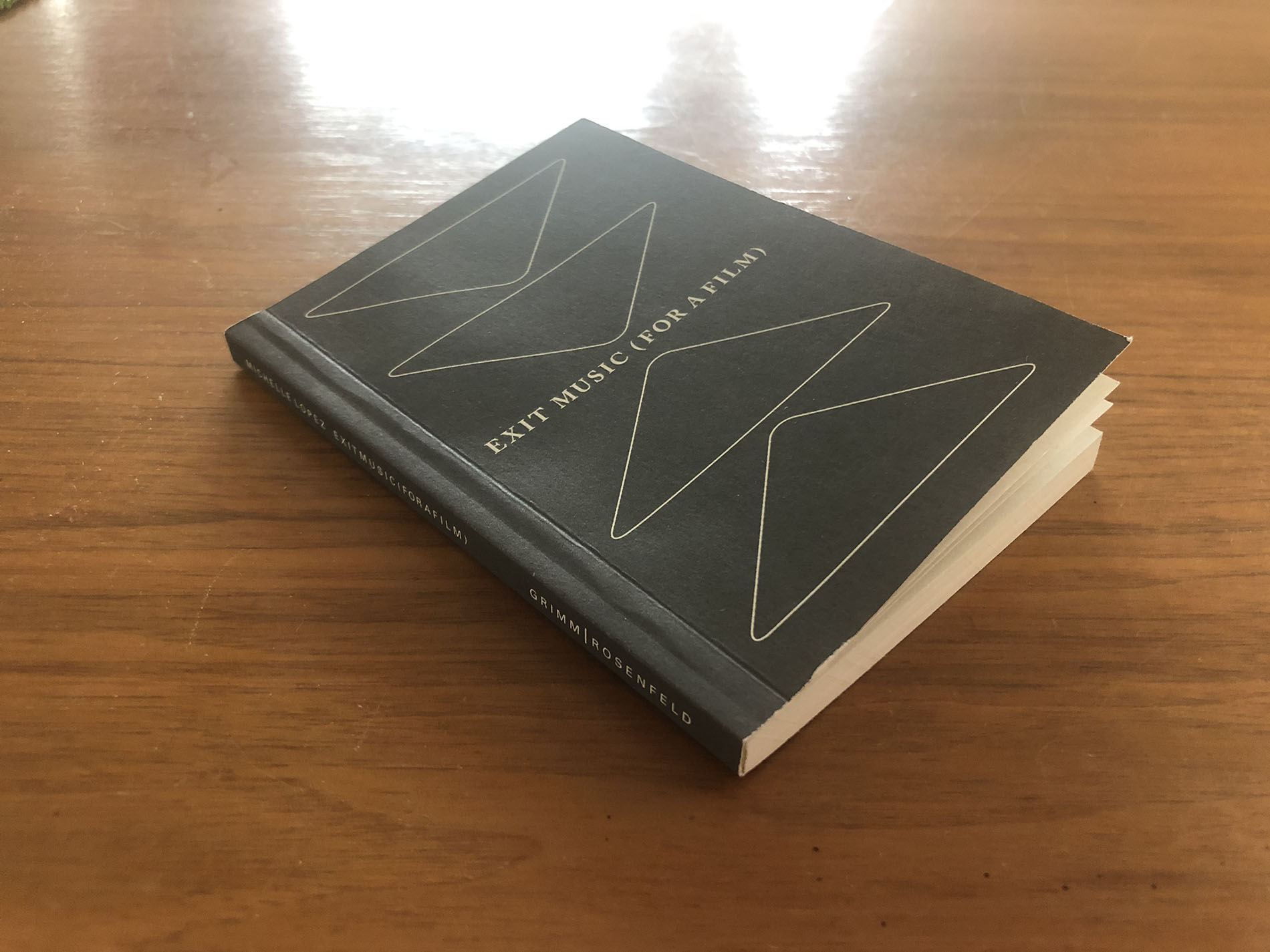 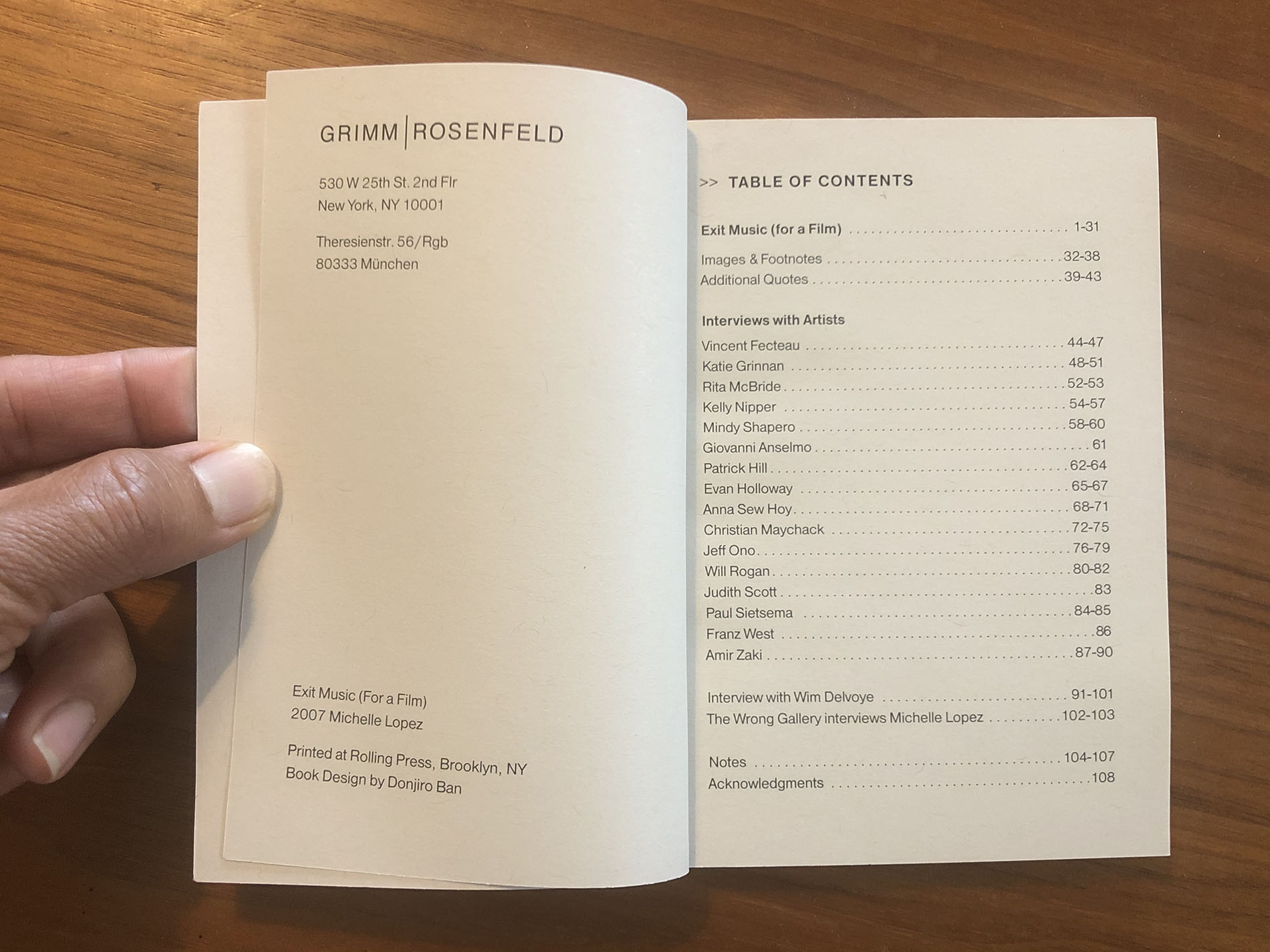 In 2005 I moved back to New York and began working on a text “Exit Music (for a Film)” that articulated my research at Berkeley for a show I curated (2006-07). The essay expressed my desire for sculpture to become more than simple illustrations of appropriated theories, but actual things that provoked and moved the viewer. Within the group show at GrimmRosenfield (exhibited in two different iterations in New York and Munich) were works and interviews by Vincent Fecteau, Katie Grinnan, Rita McBride, Kelly Nipper, Mindy Shapero, Giovanni Anselmo, Patrick Hill, Evan Hooloway, Anna Sew Hoy, Christian Maychack, Jeff Ono, Will Rogan, Judith Scott, Paul Sietsema, Franz West, Amir Zaki, Wim Delvoye, and The Wrong Gallery. Book design by Donjiro Ban and produced by Adrian Rosenfeld of Grimm/Rosenfeld.