"In collaboration with composer Anna Weesner, Michelle Lopez presents Fictitious Pivot, a live performance designed for the Carpenter Center’s central ramp. A spare composition of wind instruments and a vocalist, the hour-long work subtly aligns with the ramp as it ascends and descends to considers different methods of negotiating the building’s circulation, elevation, and integration. Fictitious Pivot is part of the group exhibition, We Just Fit, You and I.

By amplifying a disjunction between body and space in the building’s porous, cavernous qualities of glass and concrete, Lopez presents an alternate and diffuse form of figuration. Its circulation vents and echoing chambers inspired a performance involving themes of Echo location clicking/clacking/knocking; disruption of time/linearity; complicating breaththrough restraint; examining the porous quality of building as circulation; and finally a translation of space through voice (body)/instrument/song.

A vocalist/performer responds to the flutists by employing body mechanisms on the musicians that can offer forms of pulling,climbing, constraining. Through these interactions, the performer’s role emerges, as she imitates the wind instrument’s translations of breathing and manipulates her presence through a language of contradictions: rampy/rompy; silence/boisterousness. The ramp suggests a kind of temporality or narrative experience, and the composition disrupts linearity though a non-idiomatic composition. It will be both wind and wench (but not inthe tropes we culturally imagine as we try and create a language that de-classifies a masculine or feminine space)."

-We Just Fit, You and I, curated by Dina Deitsch and Dan Byers, Harvard Carpenter Center, Cambridge, 2017, excerpt of press release. 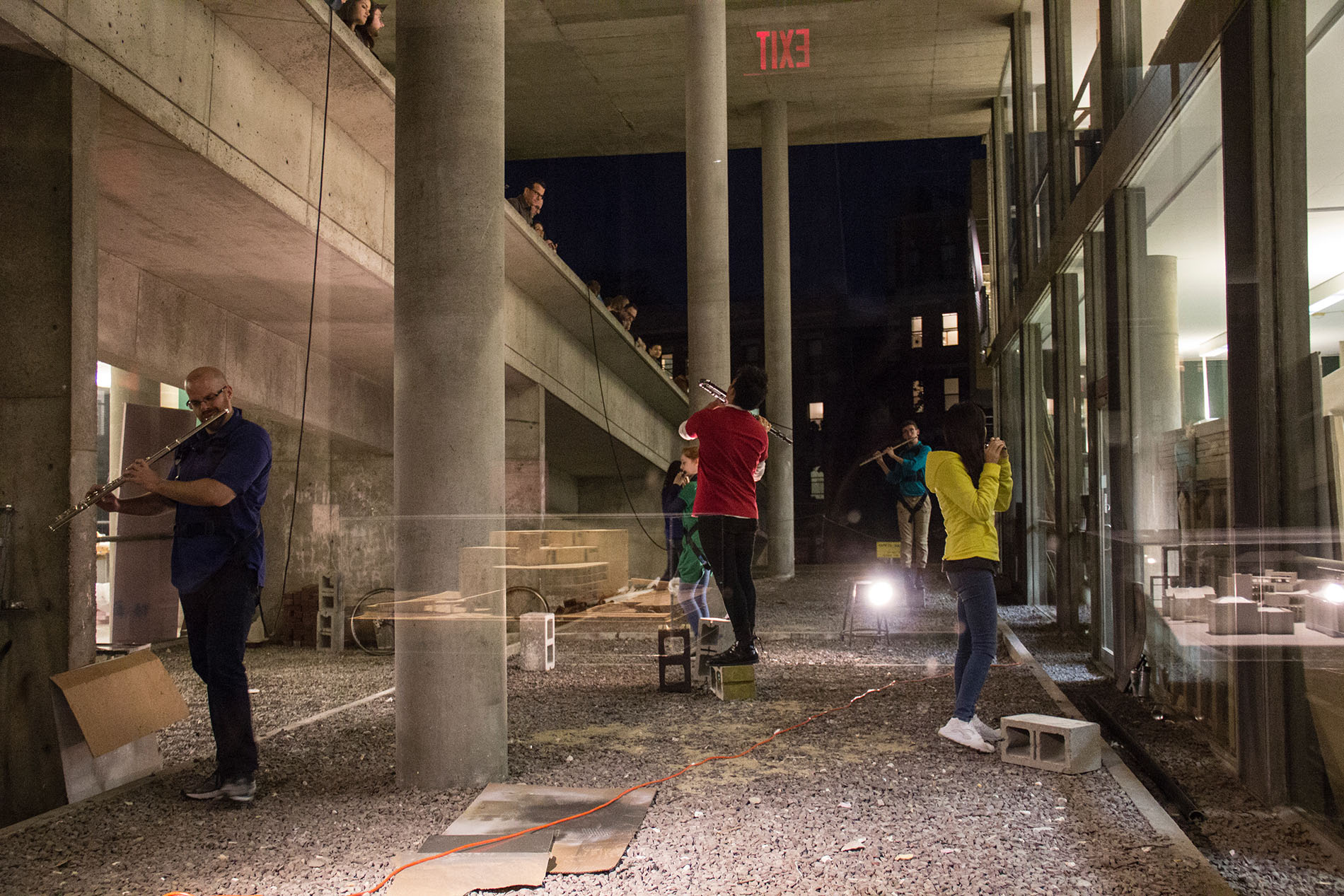 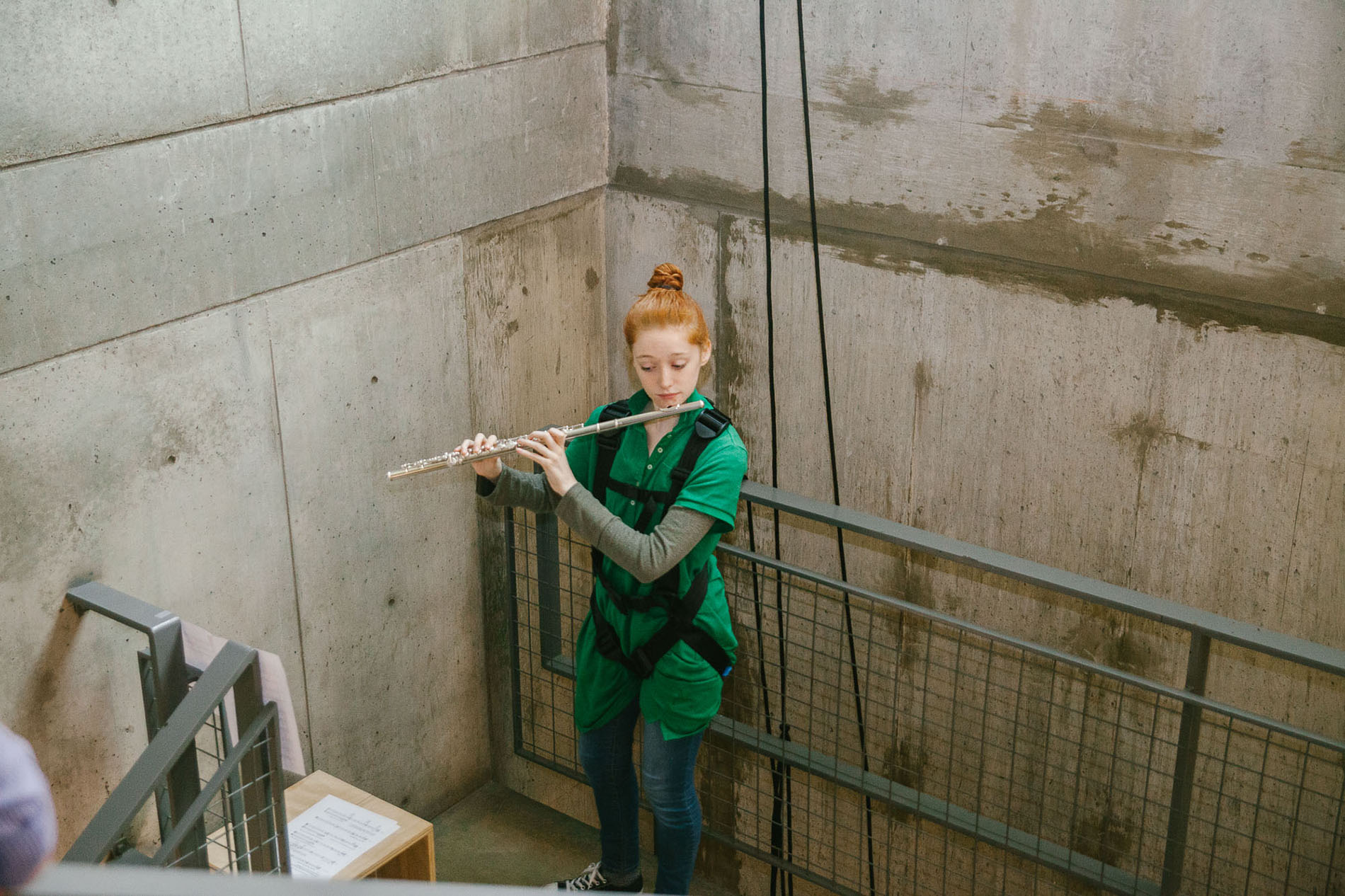 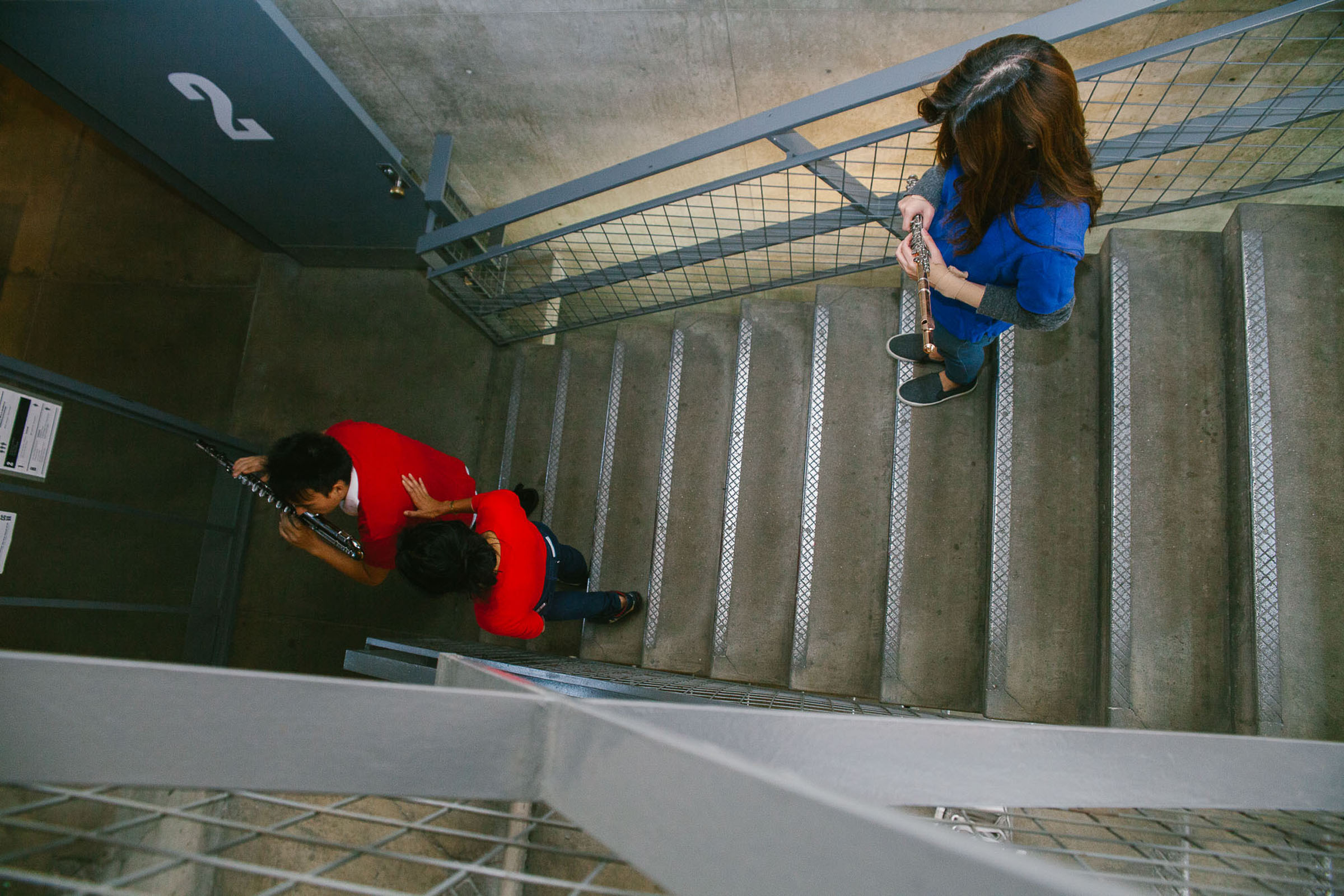 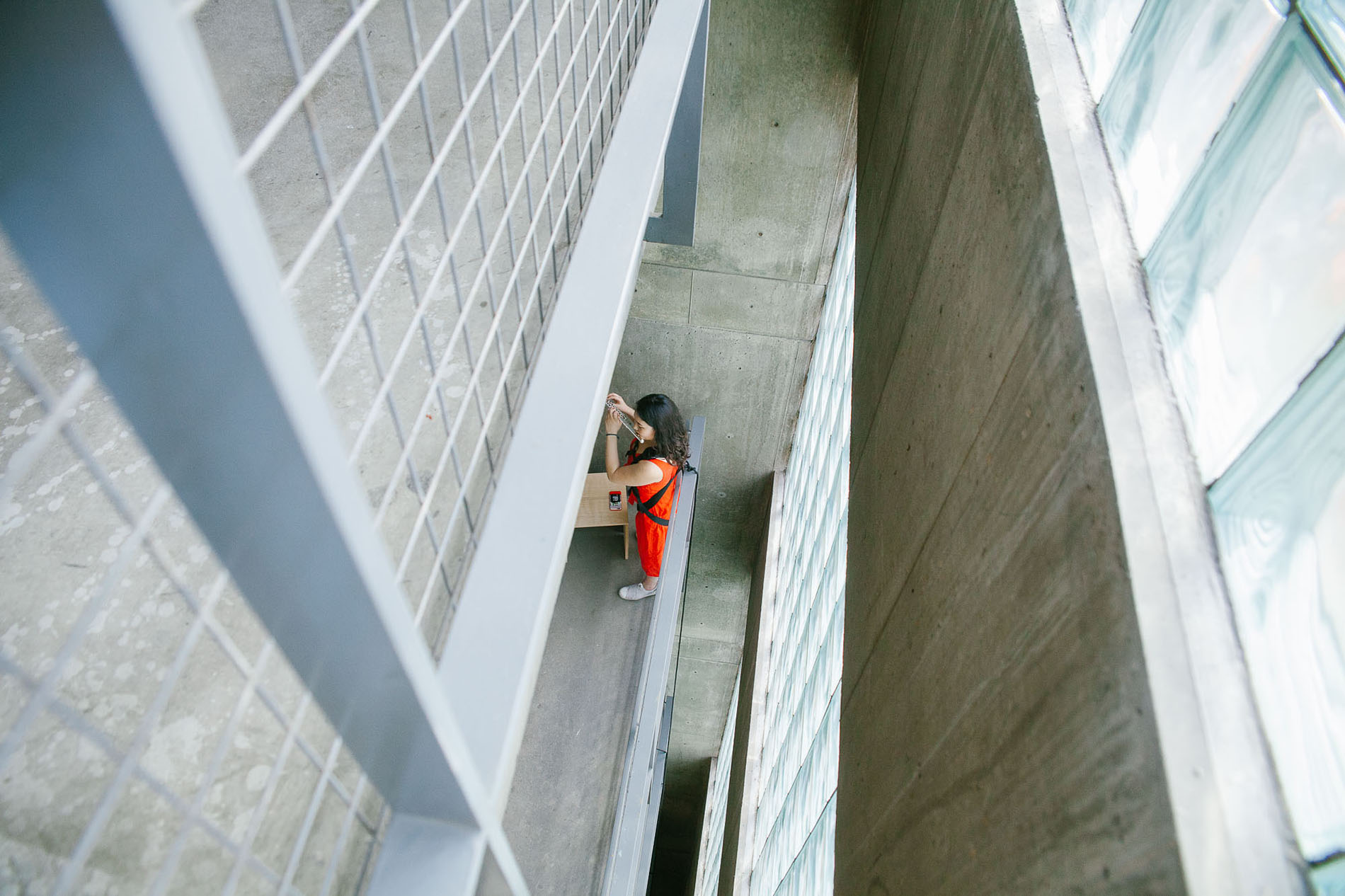 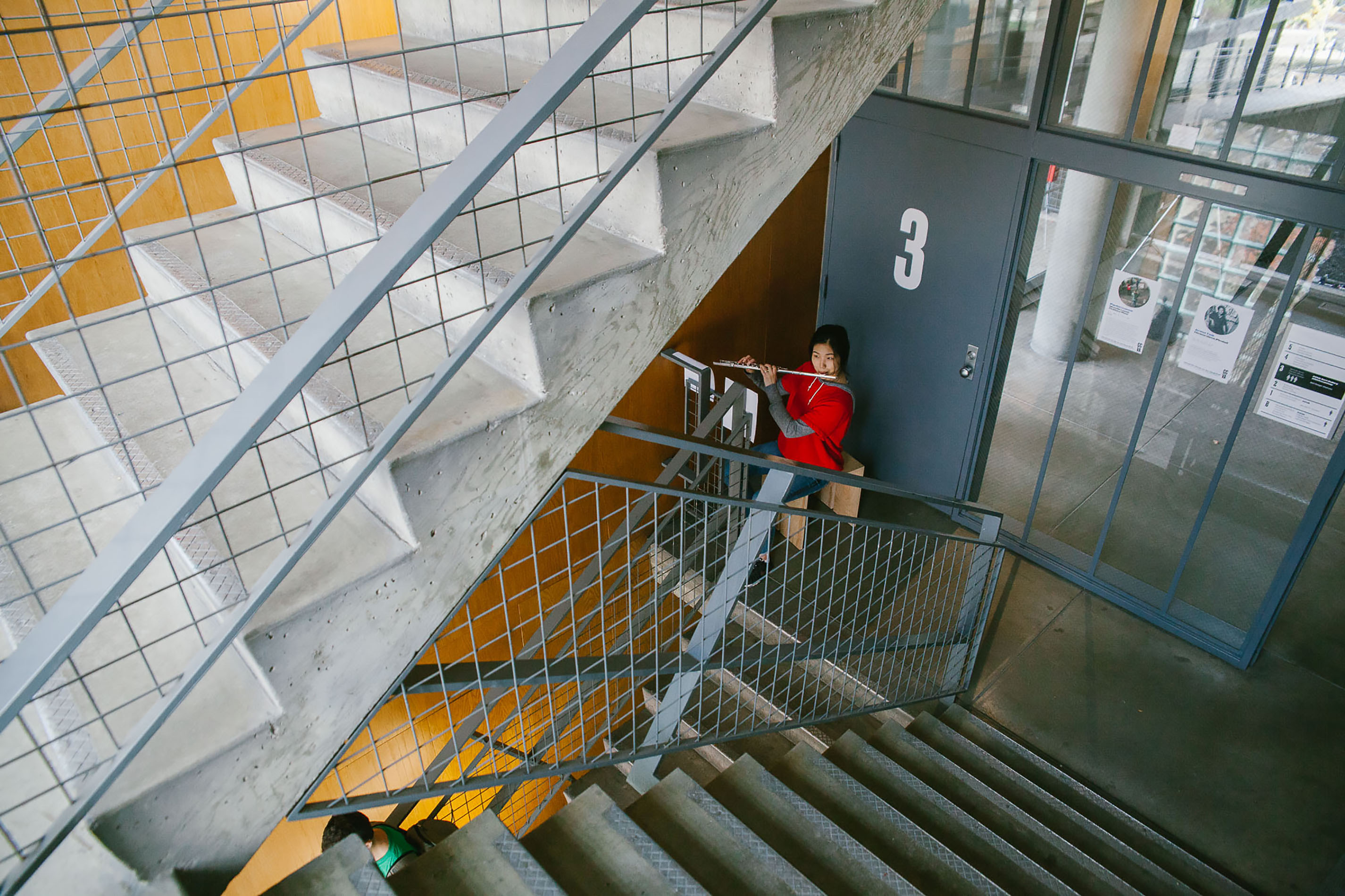 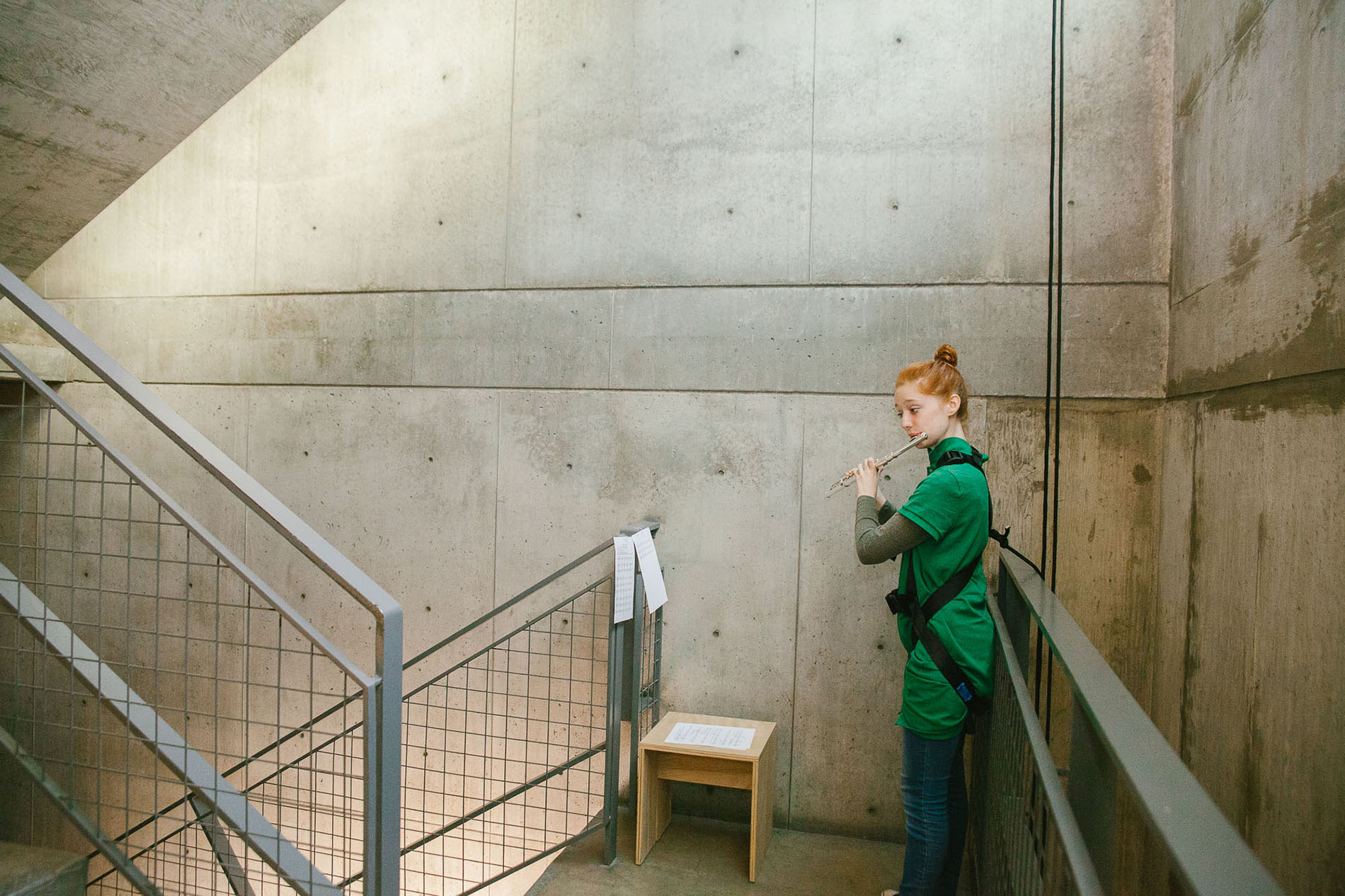 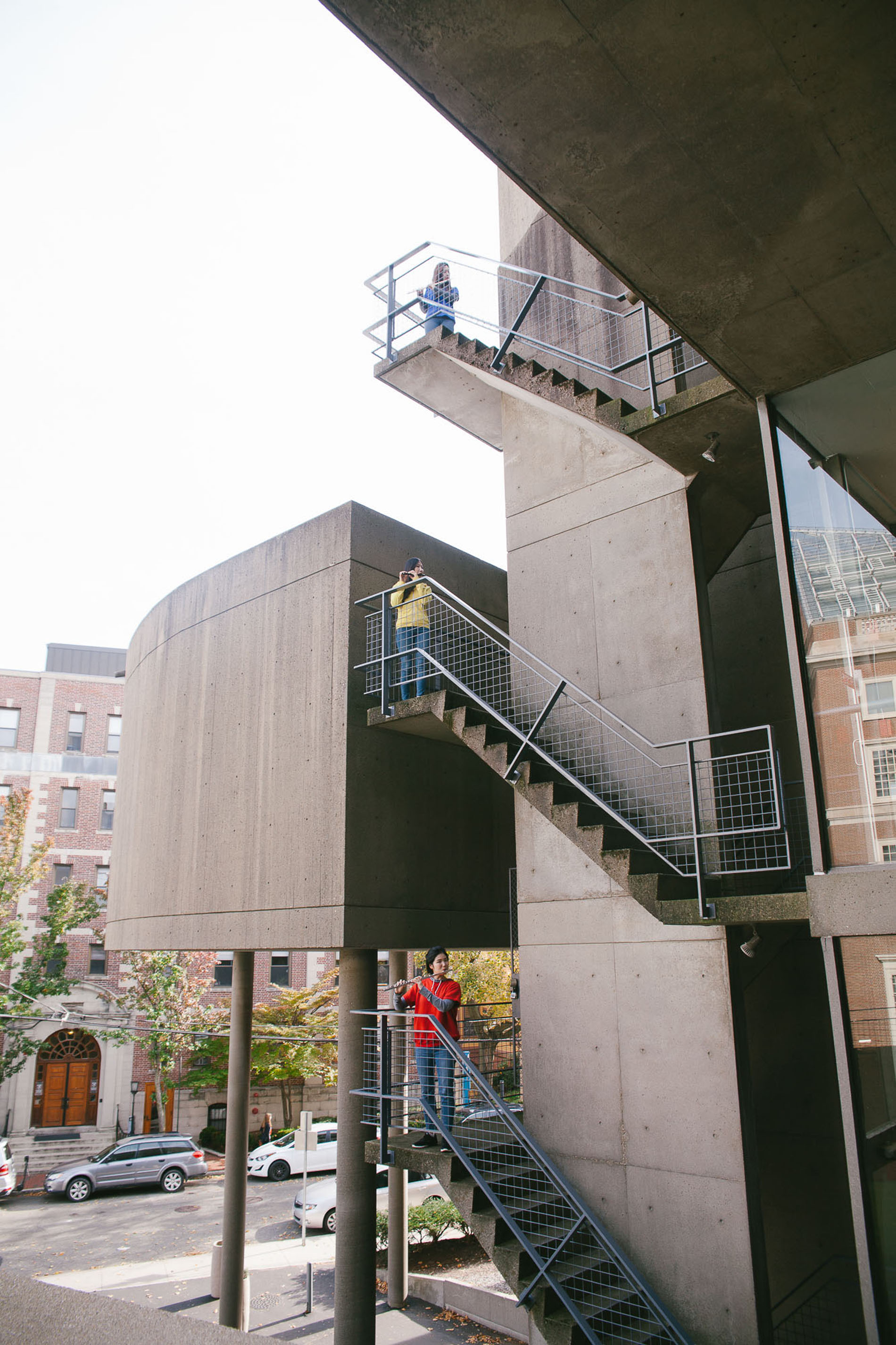 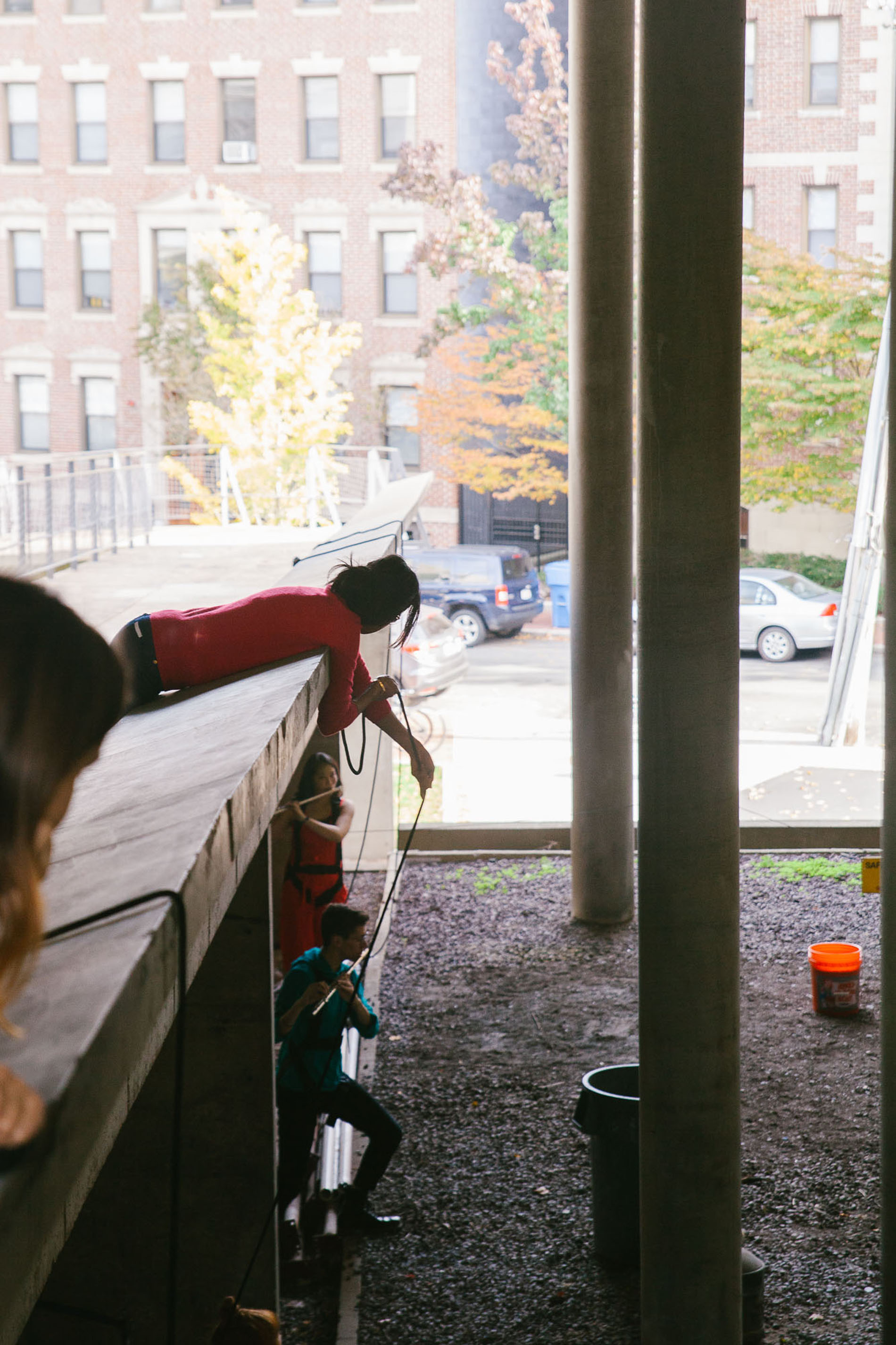 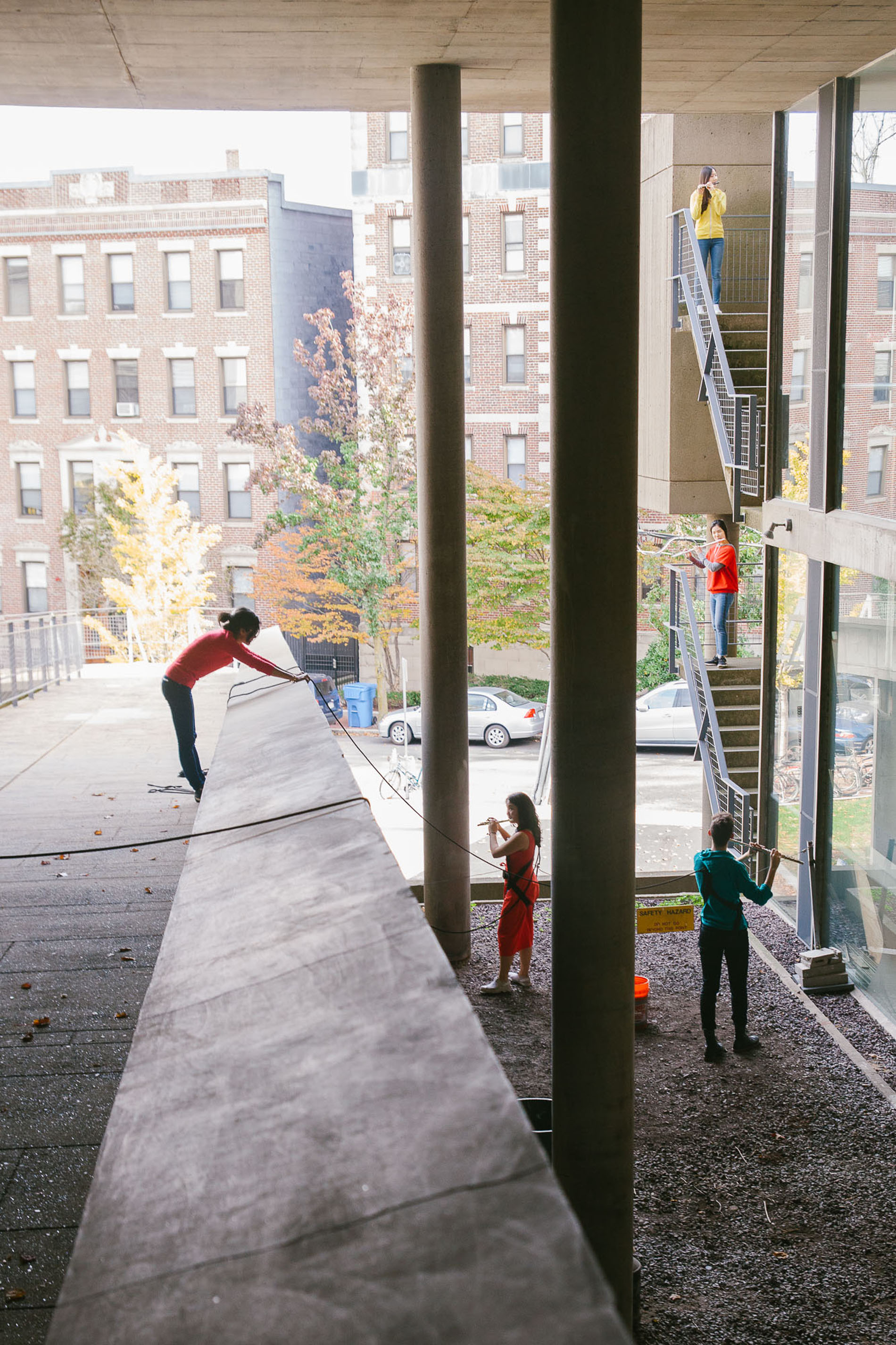 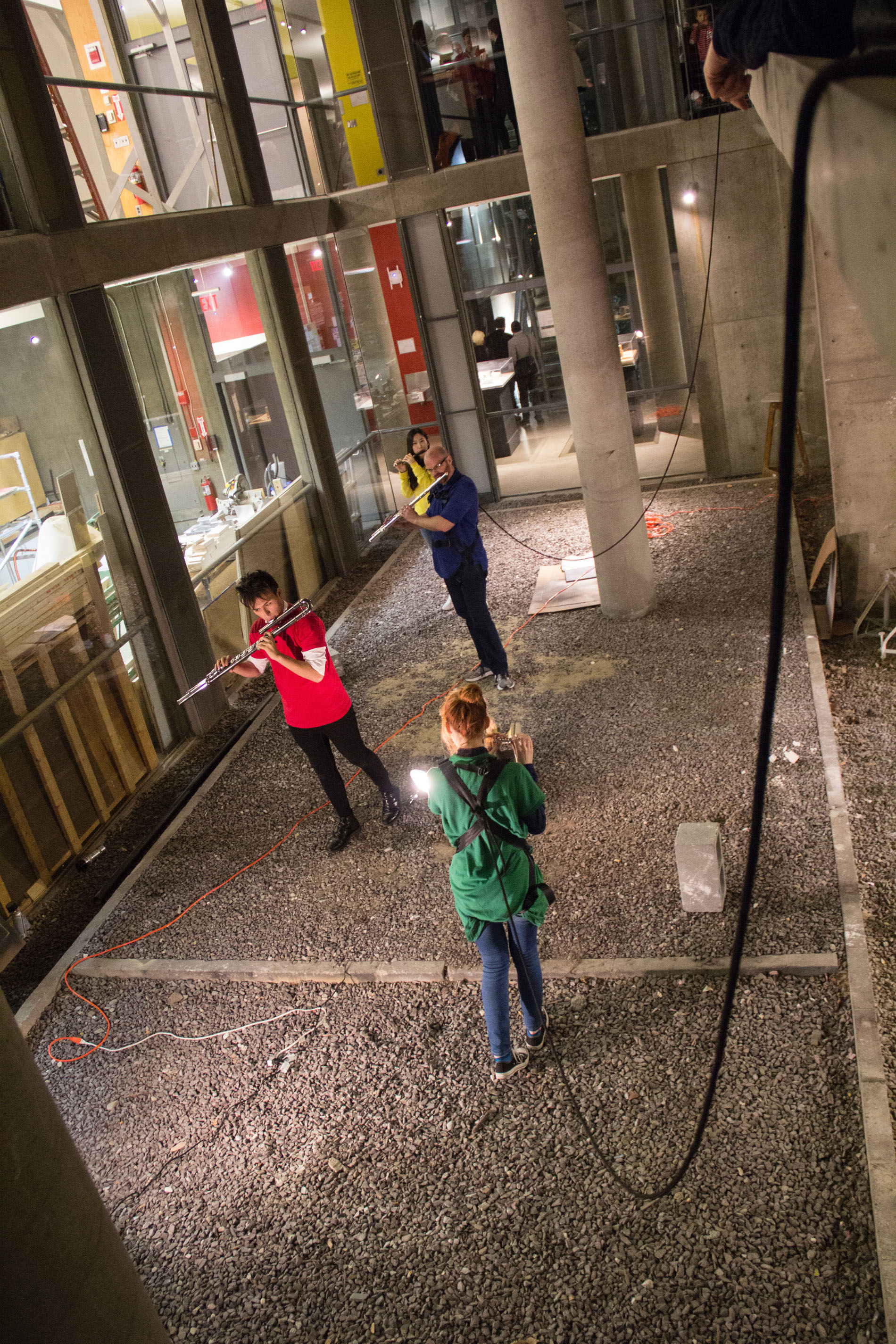 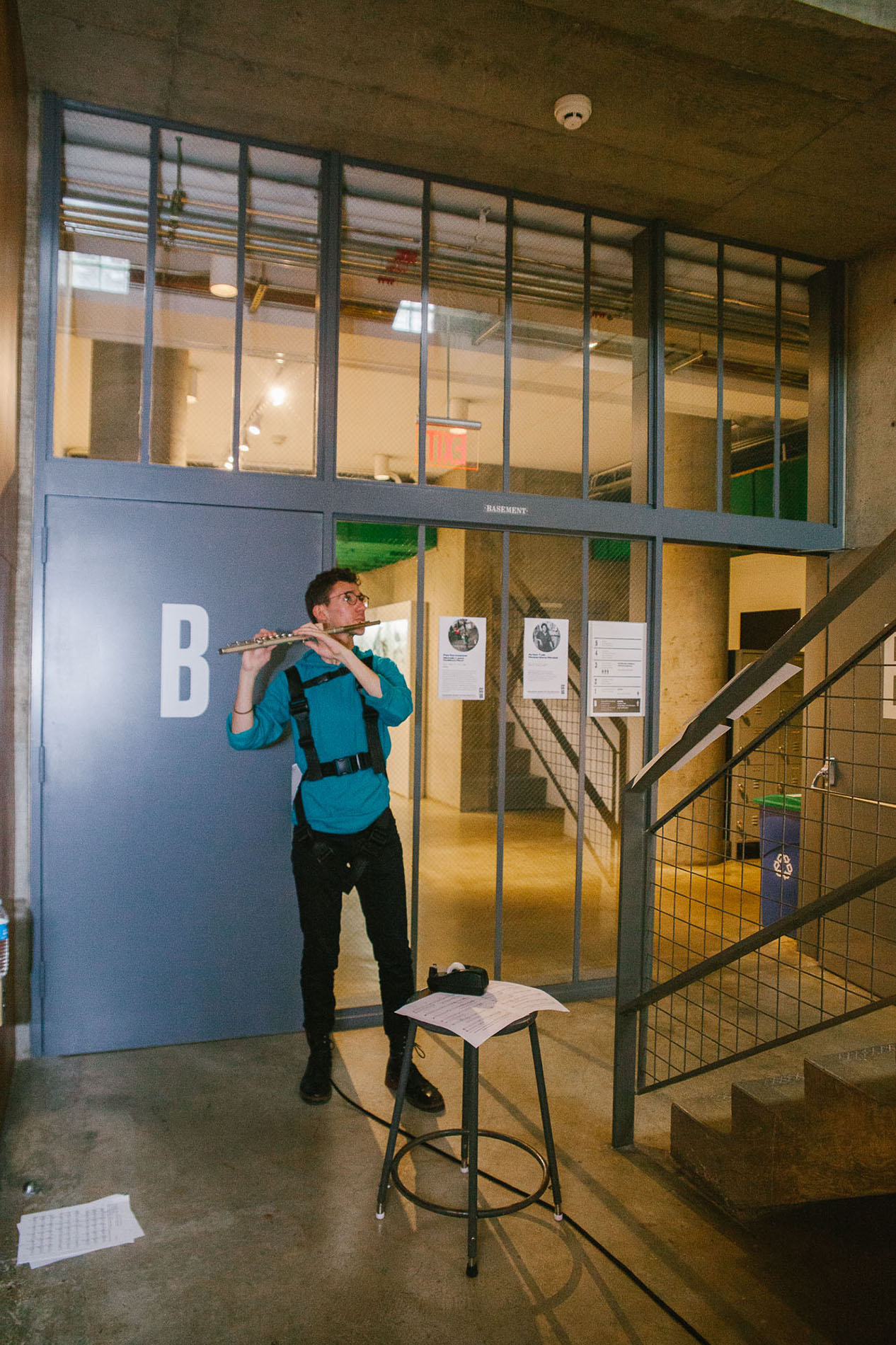 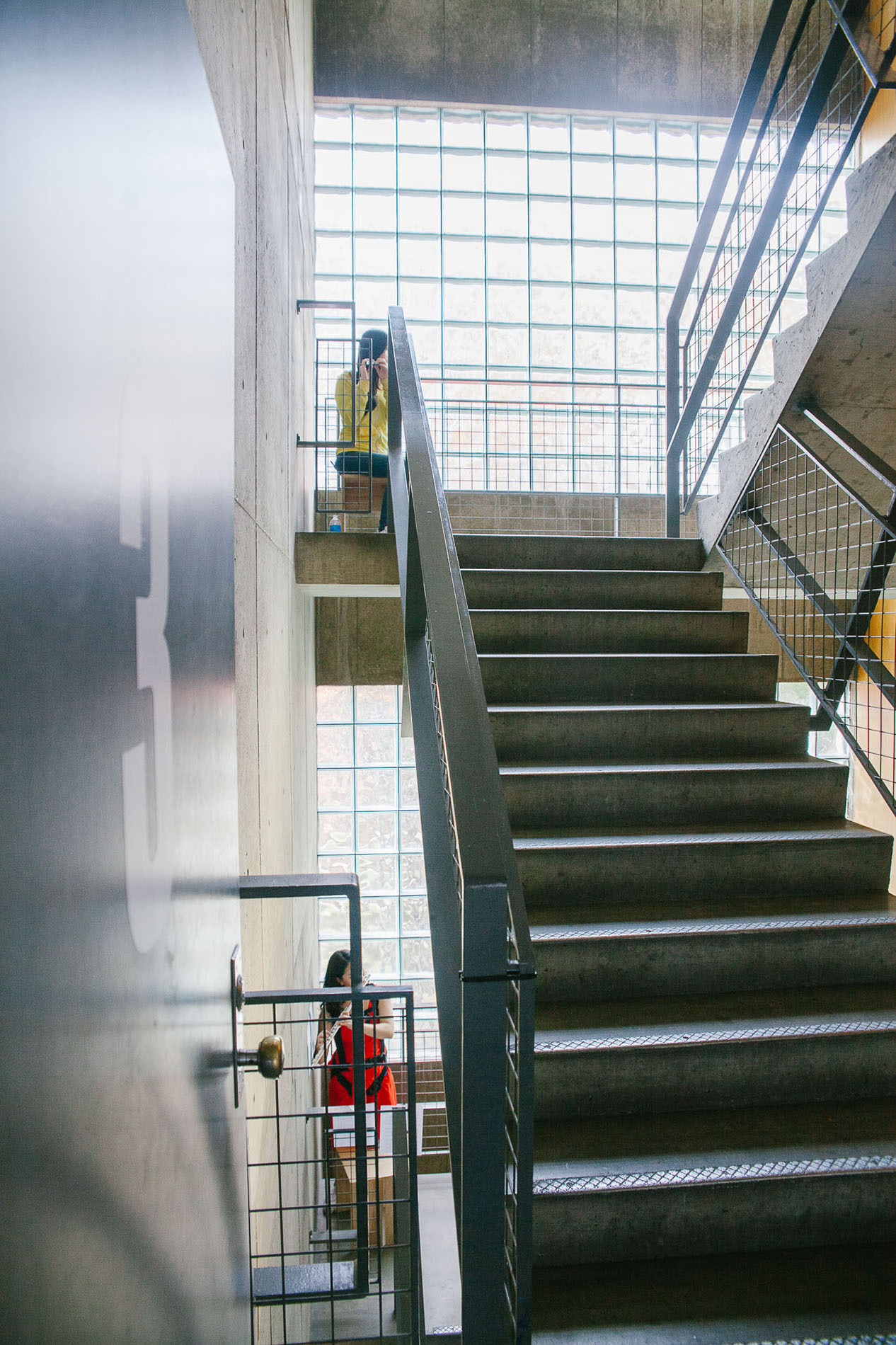 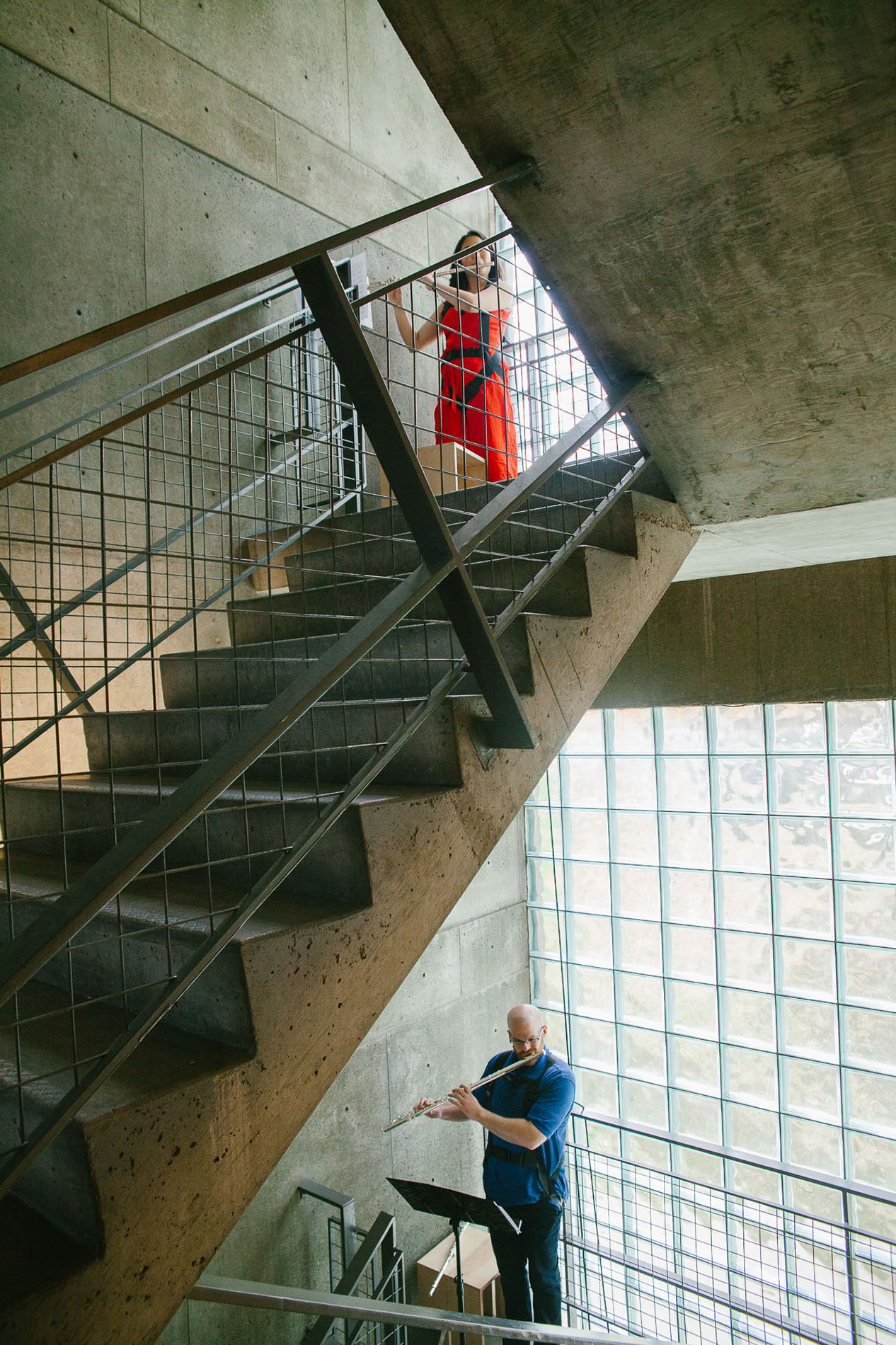 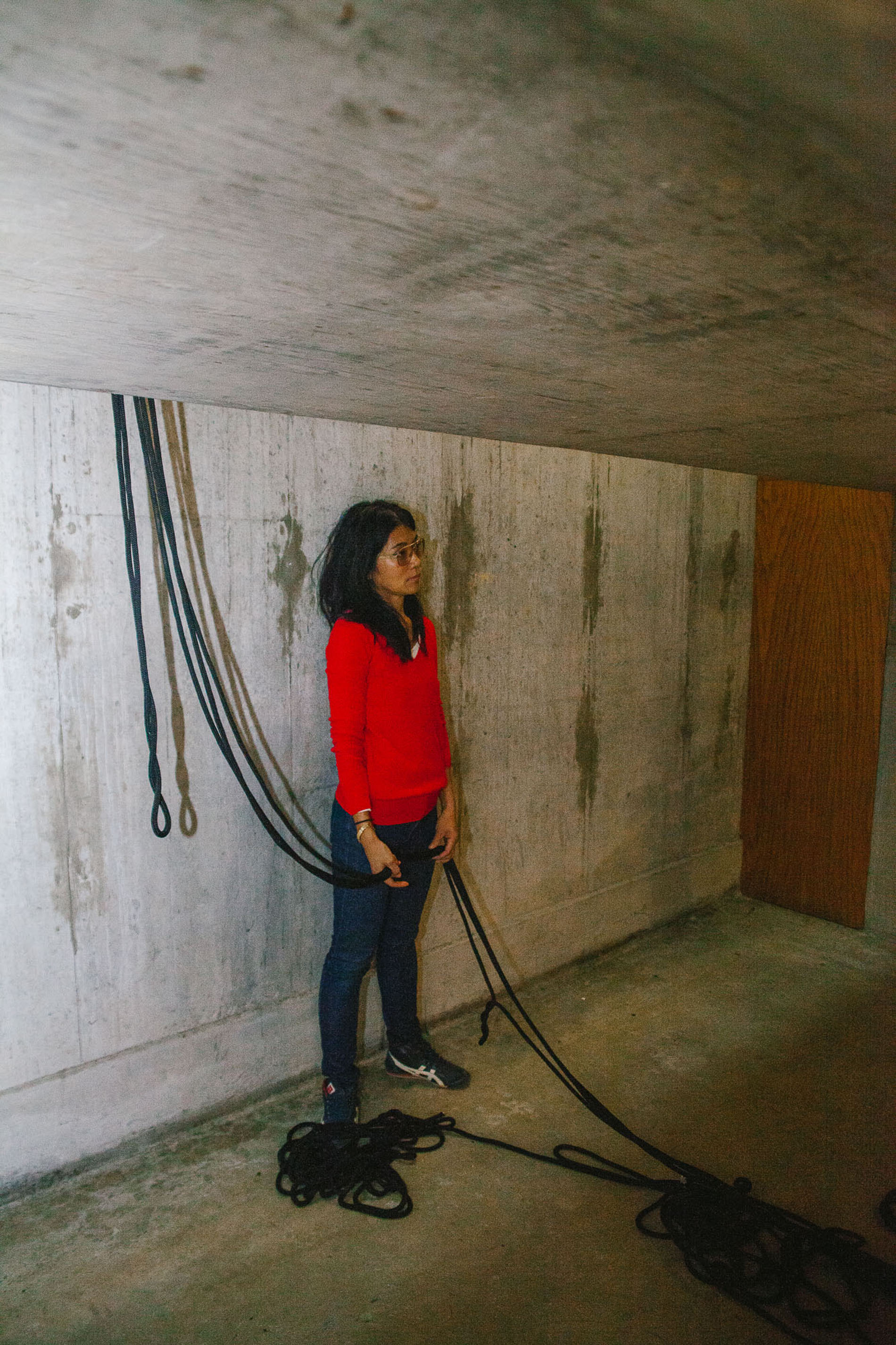 FICTITIOUS PIVOT Performance: “You Just Fit, You and I”
curated by Dina Deitsch, collaboration with composer Anna Weesner
Carpenter Center for the Arts, Cambridge, MA
2017

In 2017, I created a performance piece at Harvard in collaboration with composer Anna Weesner that responded directly to the architect Le Corbusier’s iconic Carpenter Center for the Visual Arts. Fictitious Pivot presented a site-specific, diffuse form of figuration by exploiting the materiality of the site itself. The concrete and glass of the building along with circulation vents are arranged architecturally in such a way as to result in a transparent, porous, and cavernous space, which creates an acoustic echo chamber of sorts. I highlighted those nether spaces by using strategies of echo location: I employed 8 flutists breathing through their instruments to ricochet and locate each other’s bodies. As each flutist was positioned in staggered formation in the long stairwell, their echoing formation created a ghostly vast organism that reverberated up and down the space, inhaling and exhaling. Dressed in full-body harnesses and suspended with ropes, the instrumentalist’s own breathing became somewhat choked, amplifying the awkwardness of their own physical reality even as it allowed them to hover in the space almost invisible.

Curated by Dina Deitsch, collaboration with composer, Anna Weesner. A site-specific performance activating Le Corbusier’s building as if the structure were a living, breathing organism. 8 flutists were positioned throughout the stairwell with their echoing sound creating an invisible body, reverberating up and down as if collectively breathing as one.

“An architecture must be walked through and traversed. ...our man has two eyes setin the front of his head, and he stands six feet above the ground and looks ahead. These biological facts are enough to damn the whole batch of plans that have the wheel revolving around a fictitious pivot. Thus, equipped with his own two eyes and looking straight ahead, our man walks about and changes positions, applies himself to his pursuits, moving in the midst of a succession of architectural realities. He re-experiences the intense feeling that has come from that sequence of movements. This is so true that architecture can be judged dead or living by the degree to which the rule of movement has been disregarded or brilliantly exploited”

For the performance, I considered the architect’s vision of the Carpenter Center as a potentially breathing organism (the bird’s eye view of the building roughly follows the shape of lungs). The structure’s dominant concrete ramp demonstrates Le Corbusier’s desire to incorporate the viewer’s breathing experience in ascension and descension mode (walking up and down in observation of the surroundings phenomenologically). Quite predictably though, his viewpoint was specifically through the male body and gaze (“The Modulor”). I resisted against this notion,by complicating the breath (an idealized breath), and present an alternate,non-male positionality.

STAIRWELL SITE: I positioned each of the flutists on the landing of the 4-story narrow stairwell. Their playing was based on eye-contact with the flutist directly below them, and also through cues of watching the performer’s breath intake. So their playing was not in unison and sonically created a slight delay. As a result, the positioning produces a rippling effect: an accordion of movement up and down the space. They transform into a collaborative breathing mechanism.

VOCALS: At the bottom of the stairwell, a female vocalist emerges and unifies her voice and breathing with the larger apparatus to become one organ (listen to “lopez weesner vocals fictitious pivot.mp3”).

RAMP SITE: Anna Weesner also created a spare composition of wind instruments that subtly align with the timing of a pedestrian ascending the steep slope. The ramp suggests a kind of temporality or narrative experience, and the composition abrupts this linearity though anon-idiomatic composition. It acts as both wind and wench (but not in the tropes we culturally imagine as we try and create a language that de-classifies a masculine or feminine space). Standing on top of the ramp, the performer would lift the flutist from the ropes attached to their harnesses. The performer would listen, to try and understand the space through the sound the performers would emit. She performs the space through their breath and body and uses them as mechanisms of orientation and echo location.

Much of these actions are a continuation of my interest of mimicking language (Video: Invisible Object, 2016) through body/breath/motion and silence. The wind instruments made sense as a material to expose sound and image as a kind of disappearance on the ramp. Weesner’s compositions are also subversively claustrophobic and emerged as a form of idiosyncratic protest amidst the Cambridge fresh air. I am interested in activating other sites: the liminal spaces of transition and industrial transport, in order to recognize other ghostly bodies via site and sound.