The exhibition is composed of a new series of (4) ten-foot tall, mirrored,aluminum forms, that continue the artist’s investigation of sculptural history and its breakdown. In this instance, Lopez looks to the legacy of Minimalism in order to examine the fascist quality of the monolith.Specifically large-scale and wall-based, Lopez’ Blue Angels reference both Chamberlain and McCracken. They each lean against the wall,having been manipulated to sag and endowed with a feather-like paper quality that negates the finish fetish. This body of work continues the artist’s trajectory examining notions of gravity, the spectator’s activation of the piece, and finally failure. And with this pretext, Lopez examines the loaded repeat of forms, of Minimalism, and even of human experience aseach sculpture seems to either be gaining strength to stand, or collapsing in on itself after great exertion.

As a cultural frame of reference, “Blue Angels” are US Navy demonstration flying planes, meant for acrobatic aerial display, that create both aspectacle and a spectatorship sport of old flying technology, without the bravado or cruelty of war. Lopez folds this fetished contradiction of object into her forms. The mirrored surface of the exterior gathers the industrial reference of an airplane wing and implicates the viewer through its reflective distortions. The interior of the work is finished with automotive/vehicle paint, selected through the lens of airline colors. For this particular body of the work, the colors come specifically from the orange-red of Delta Airlines and the powder blue of Korean Air. Yet the search types, among others, are on the verge of collapse.

Among the four Blue Angels, there is one matte white, powder-coated aluminum piece that has a jet-black interior and evokes a large piece of paper. Again, Lopez defies expectation of the material and turns industrial aluminum into a crumpled delicate form. Despite the assembly-line materials, the artist approaches the work as a drawing and manipulates each work herself. This white work is a more overt association with sculpture as drawing.

Michael Wilson of Artforum reviewed Blue Angels when the first iteration of the series appeared at Simon Preston Gallery in New York: 'Turning Minimalist form against itself is hardly a new idea-one might even consider, it a genre unto itself but it still offers room for maneuver. In Vertical Neck, her second solo exhibition at Simon Preston, Brooklyn-based artist Michelle Lopez presented a strong, clean suite of five new sculptures that capitalize on the movement’s enduring legacy but sidestep parody and polemic to arrive at a more subtly allusive language.... Three roughly folded and heavily crumpled sheets of aluminum lean against the wall and tower above head height, their interiors painted blue or black, their exteriors white or colorlessly reflective.The suggestion that attempts at formal perfection are necessarily doomed to failure is clear,but in their fun- house-mirror distortions, these works direct that argument at not only artistic folly but also the viewer’sown vanities and imperfections. Still, the news isn’t all bad; there’s an insinuation in the aluminum’s shiny. paper- like surfaces of gift wrap, a hint of celebration and renewal.... [T]here is a hint of nose-thumbing at the consistent anality of the Guys, but Lopez’s remake is more understated, more extensive, more radical-and a lot more appealing-than that might imply.' (Artforum, November 2011)

Eight ink drawings on watercolor paper, which are studies for the series, will be presented for the first time. And the mirrored aluminum Blue Angels are new works (2012) created for this exhibition." 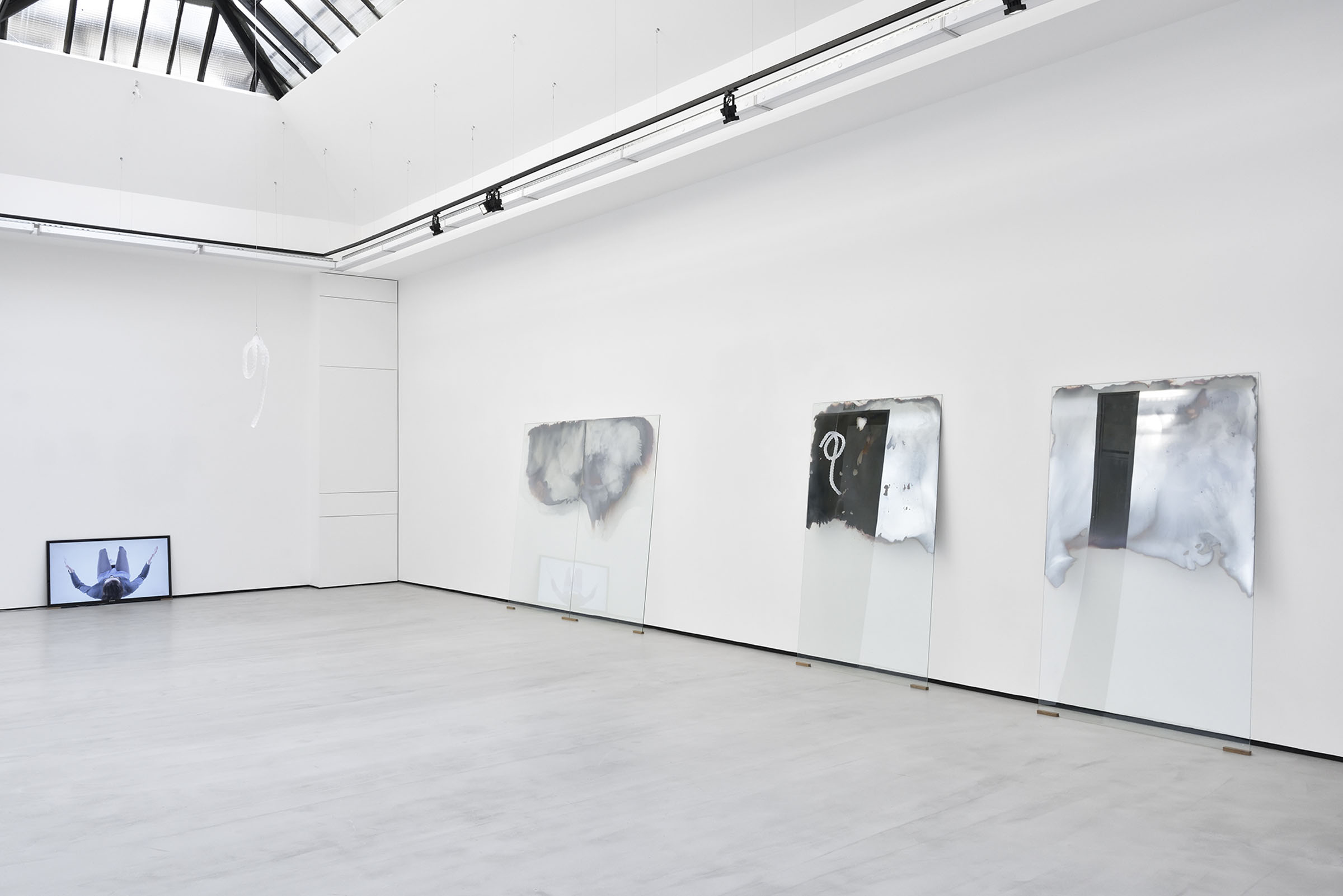 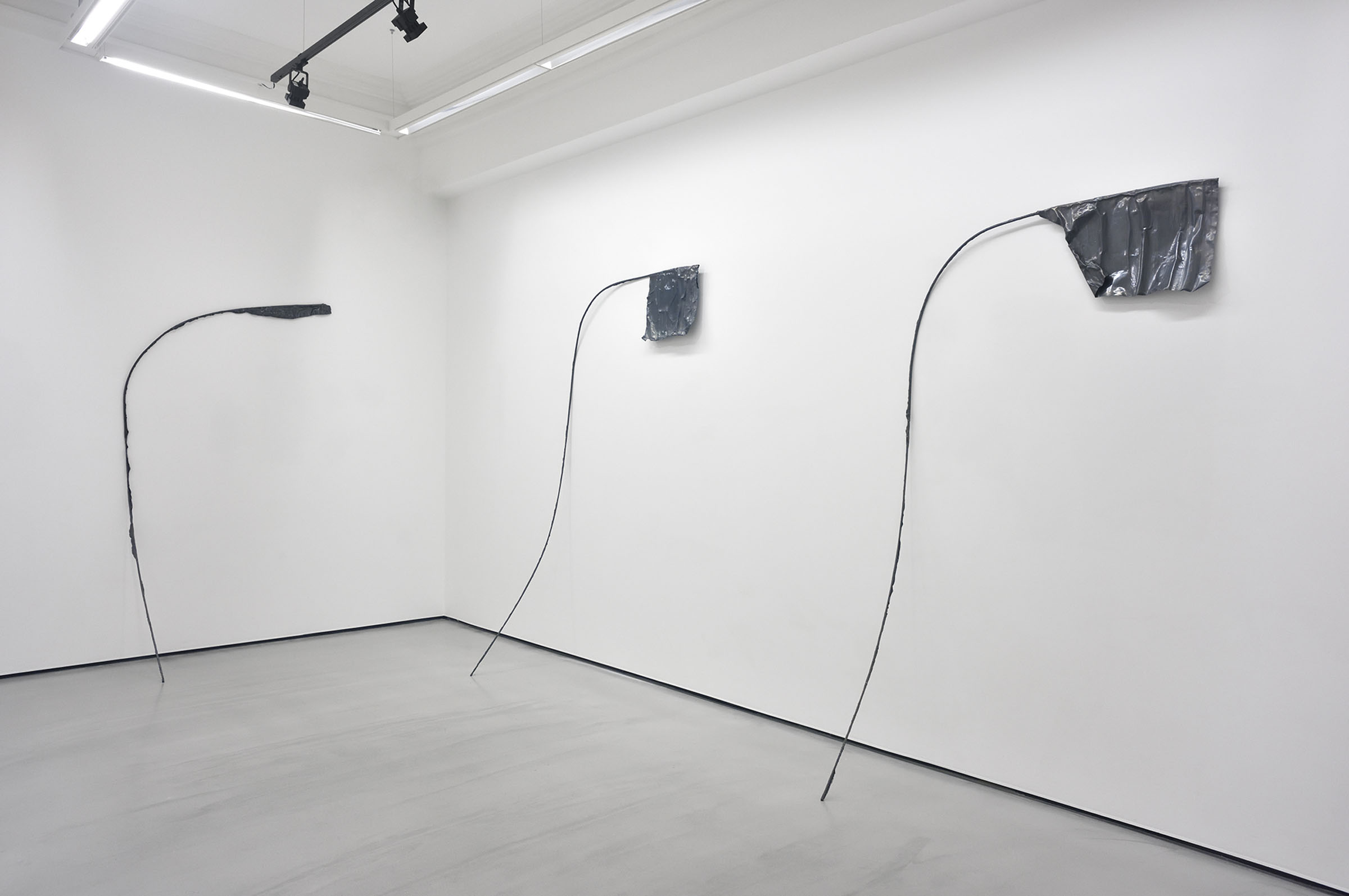 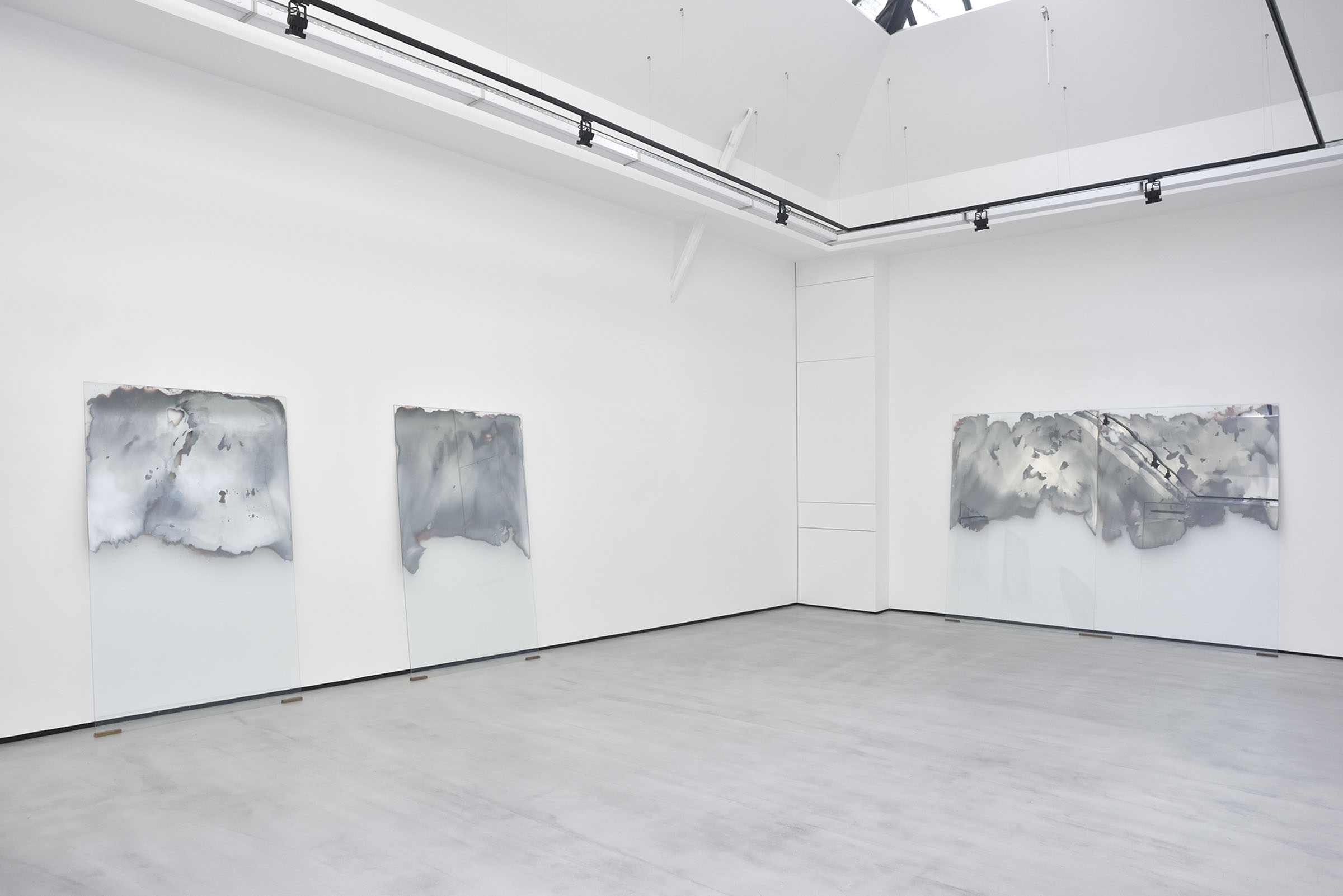 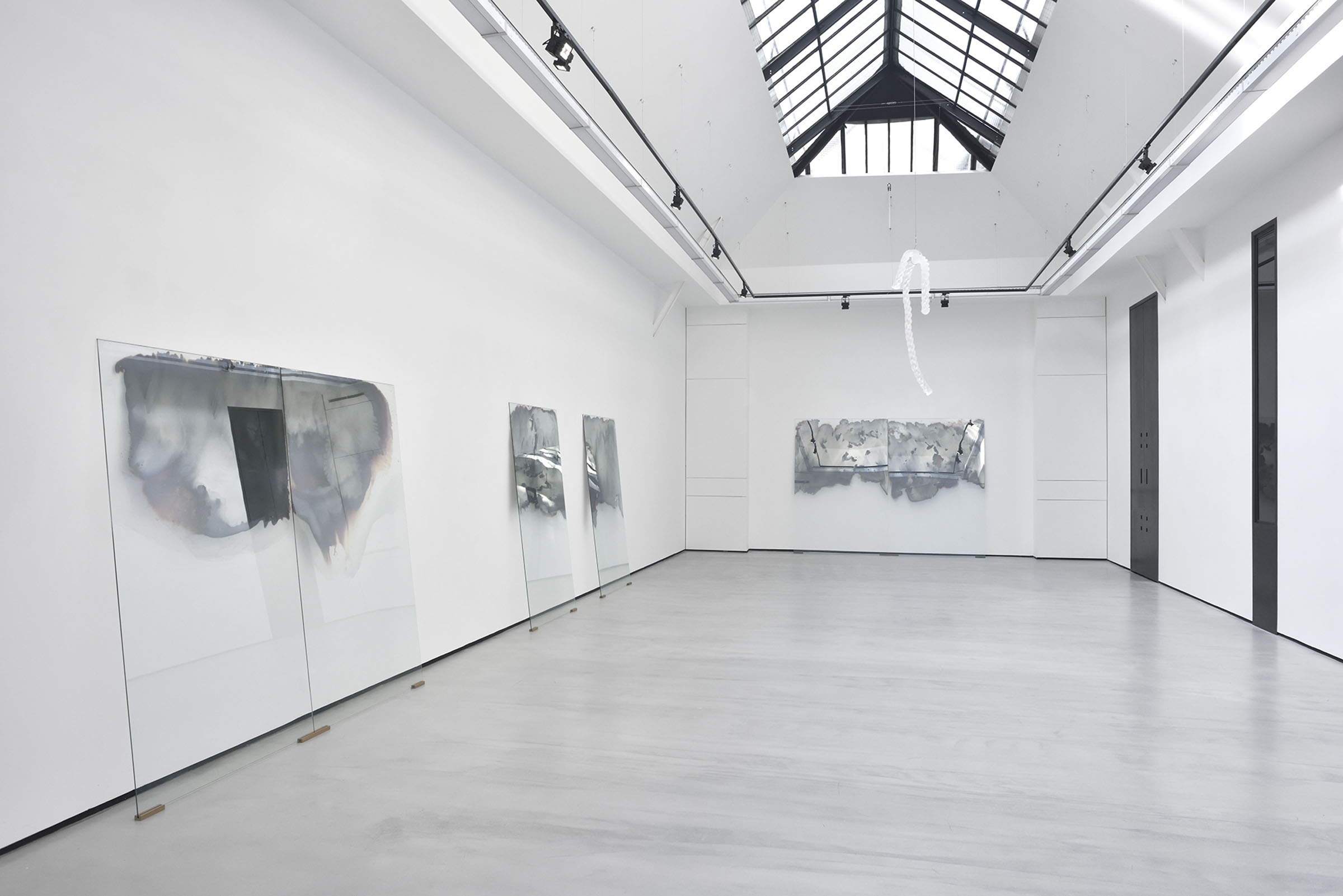 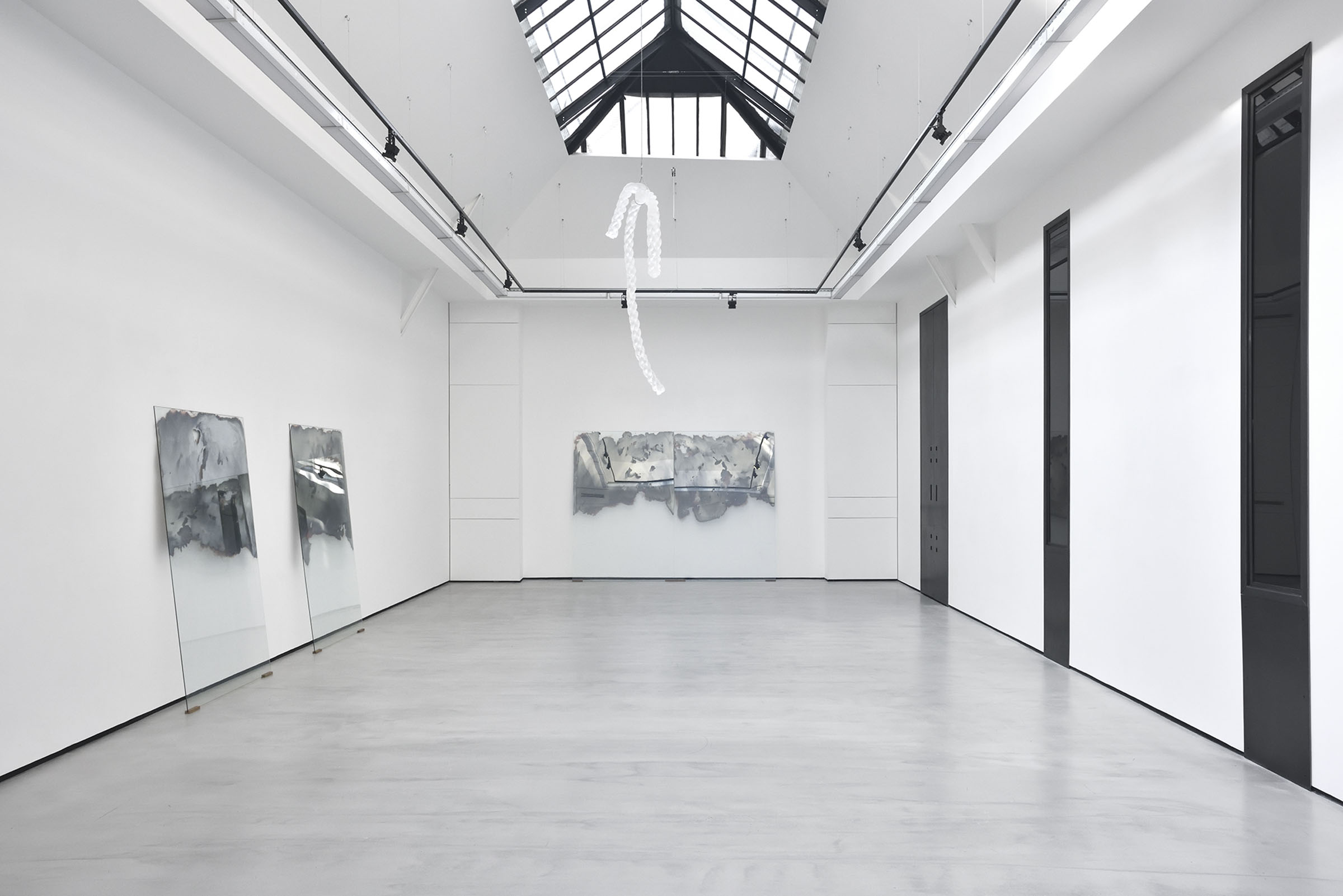 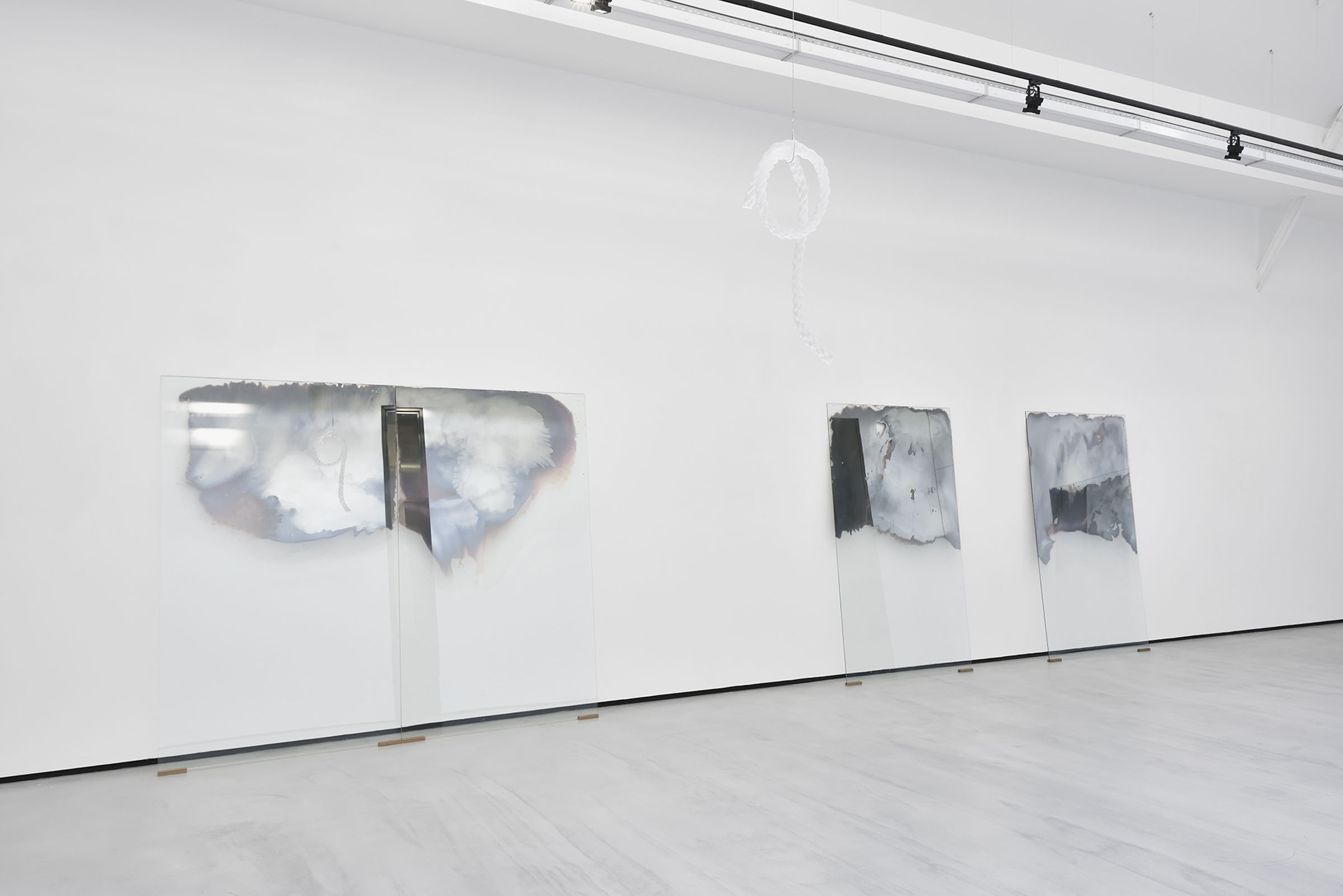 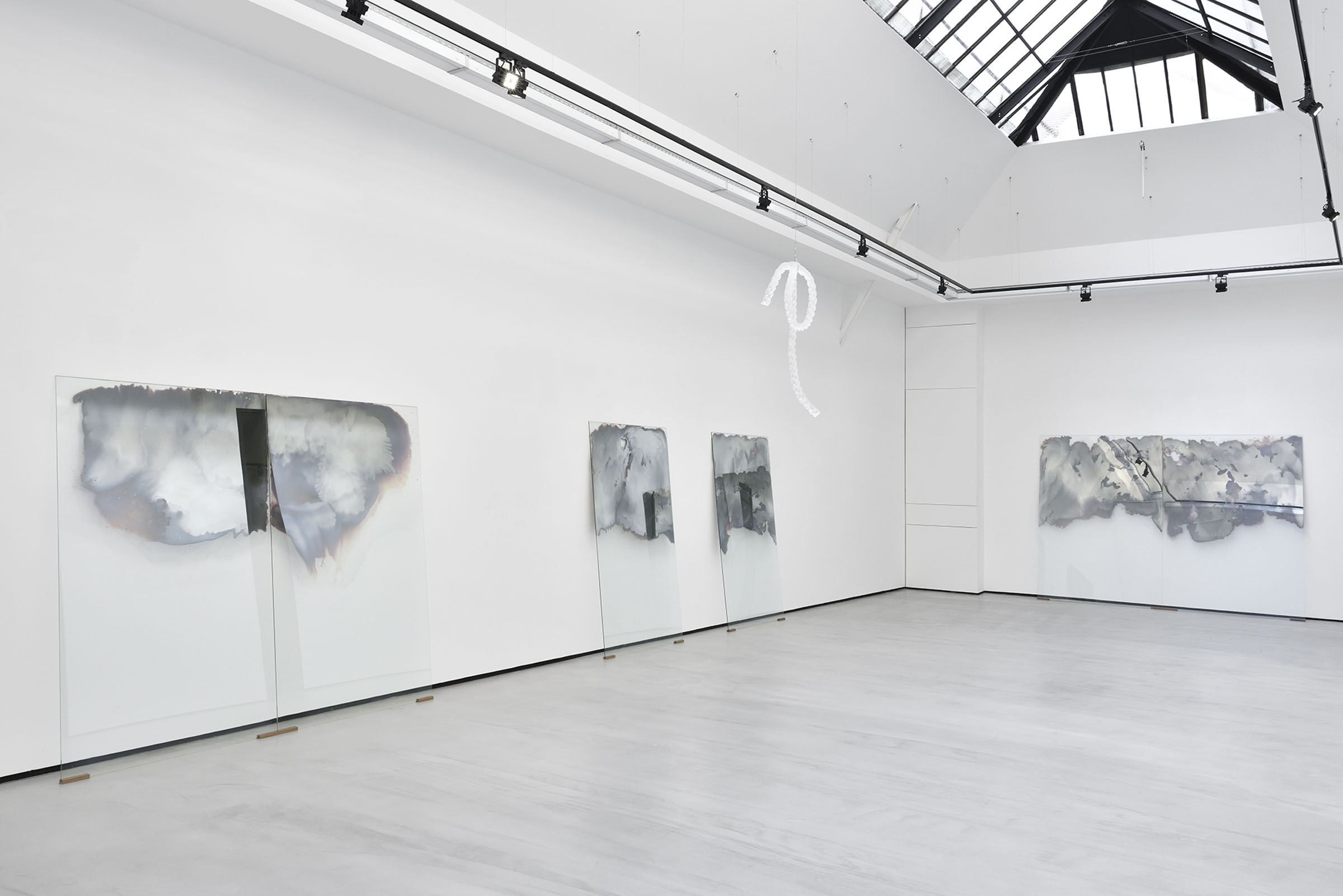 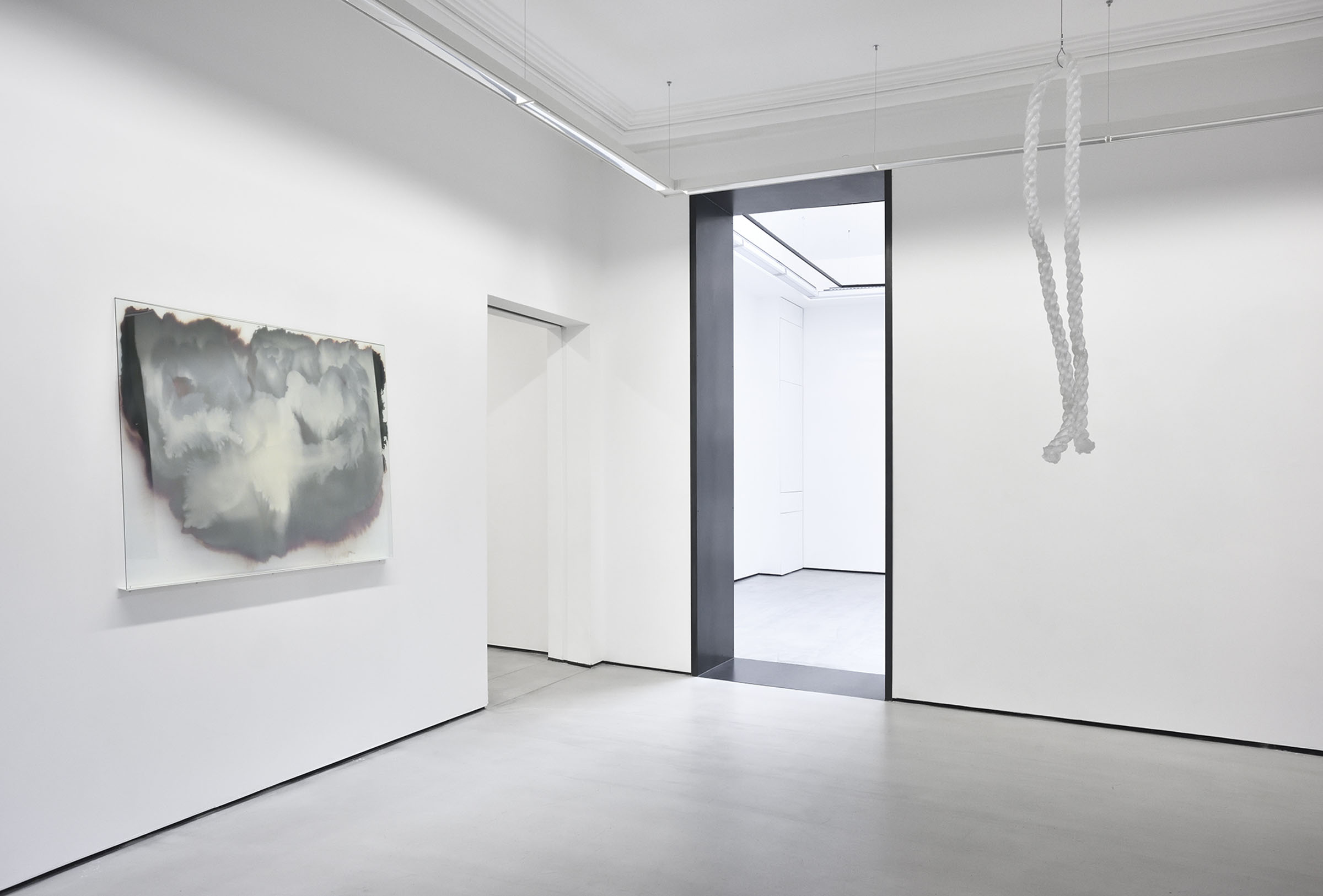 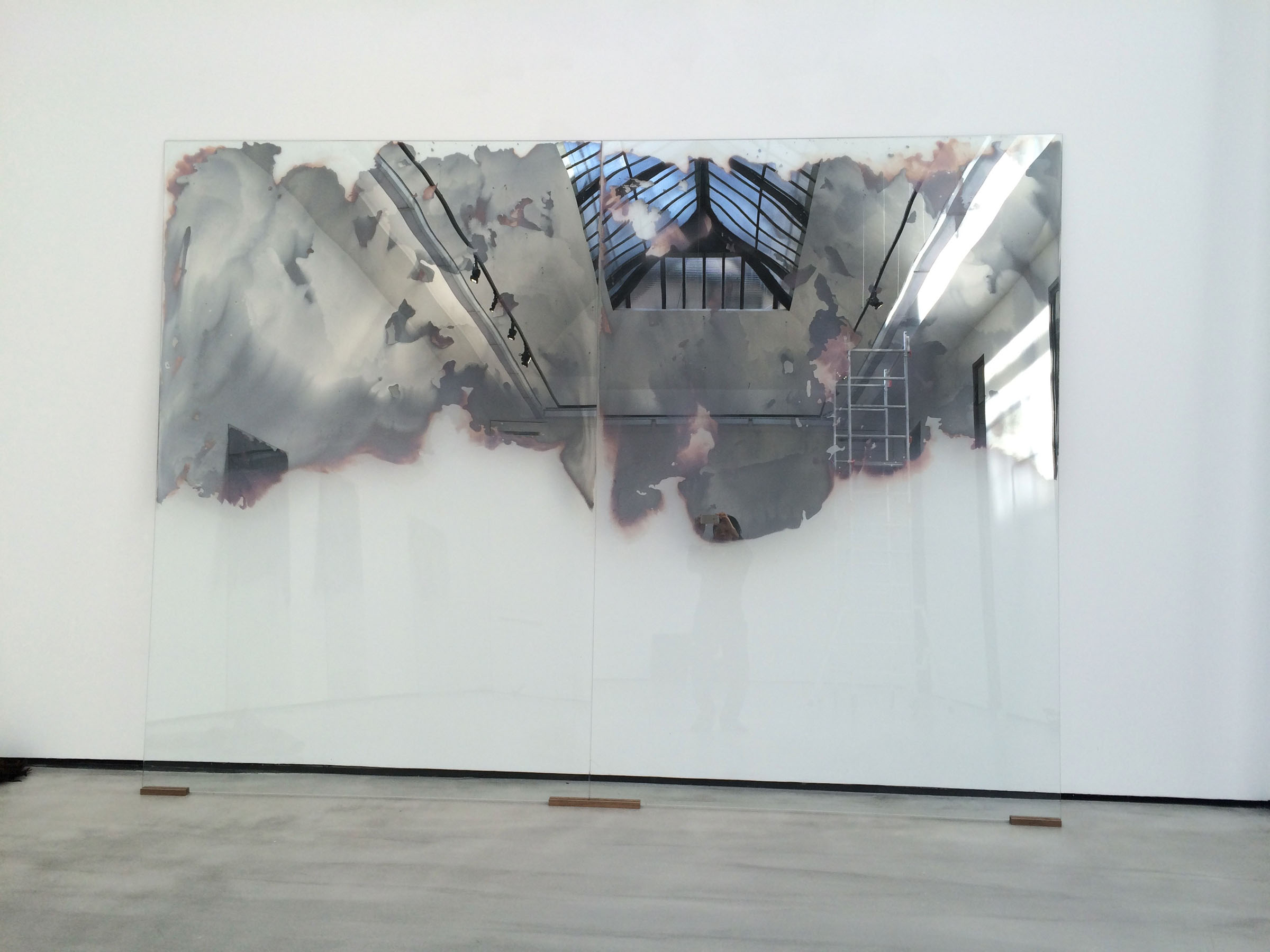 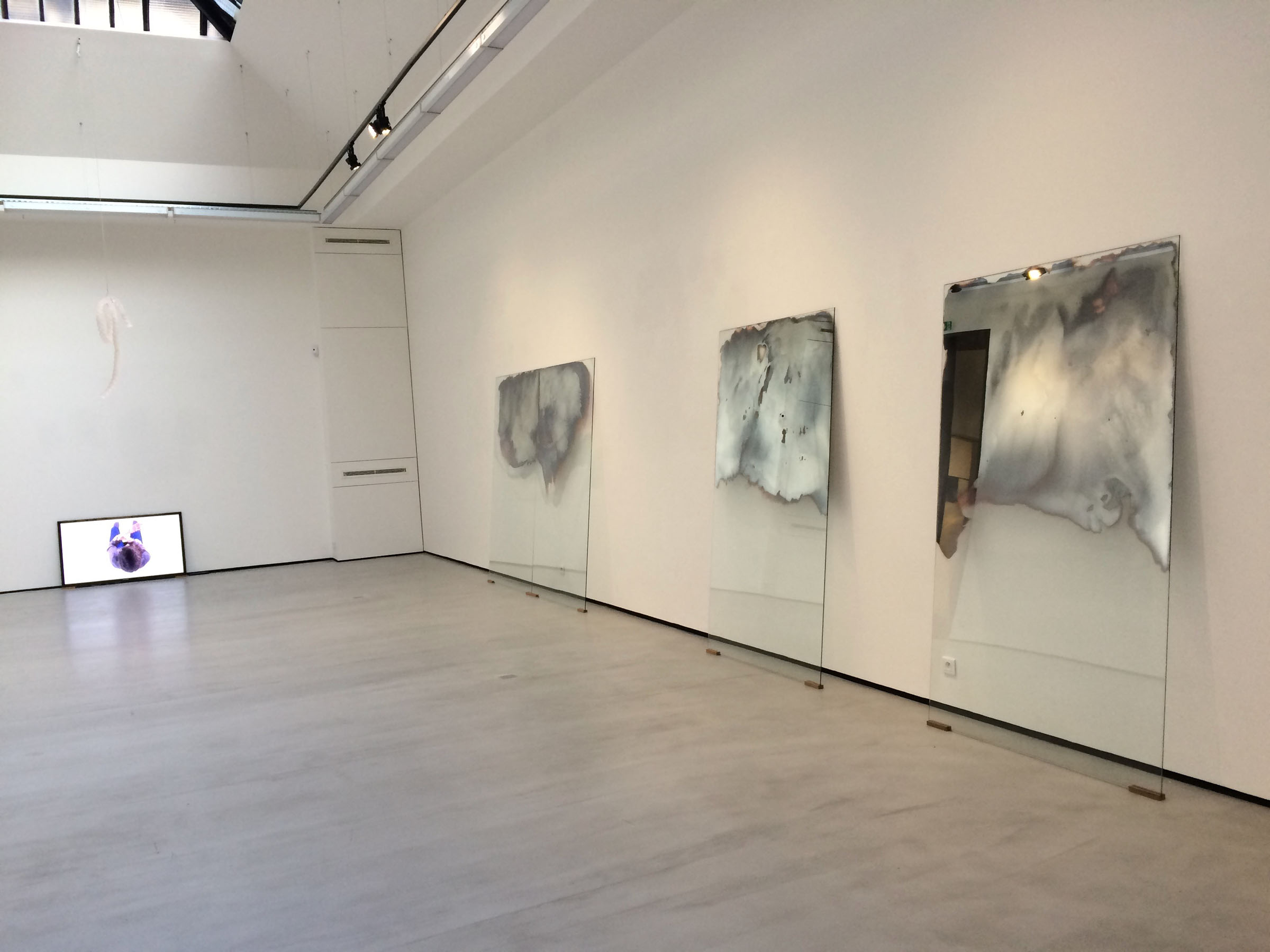 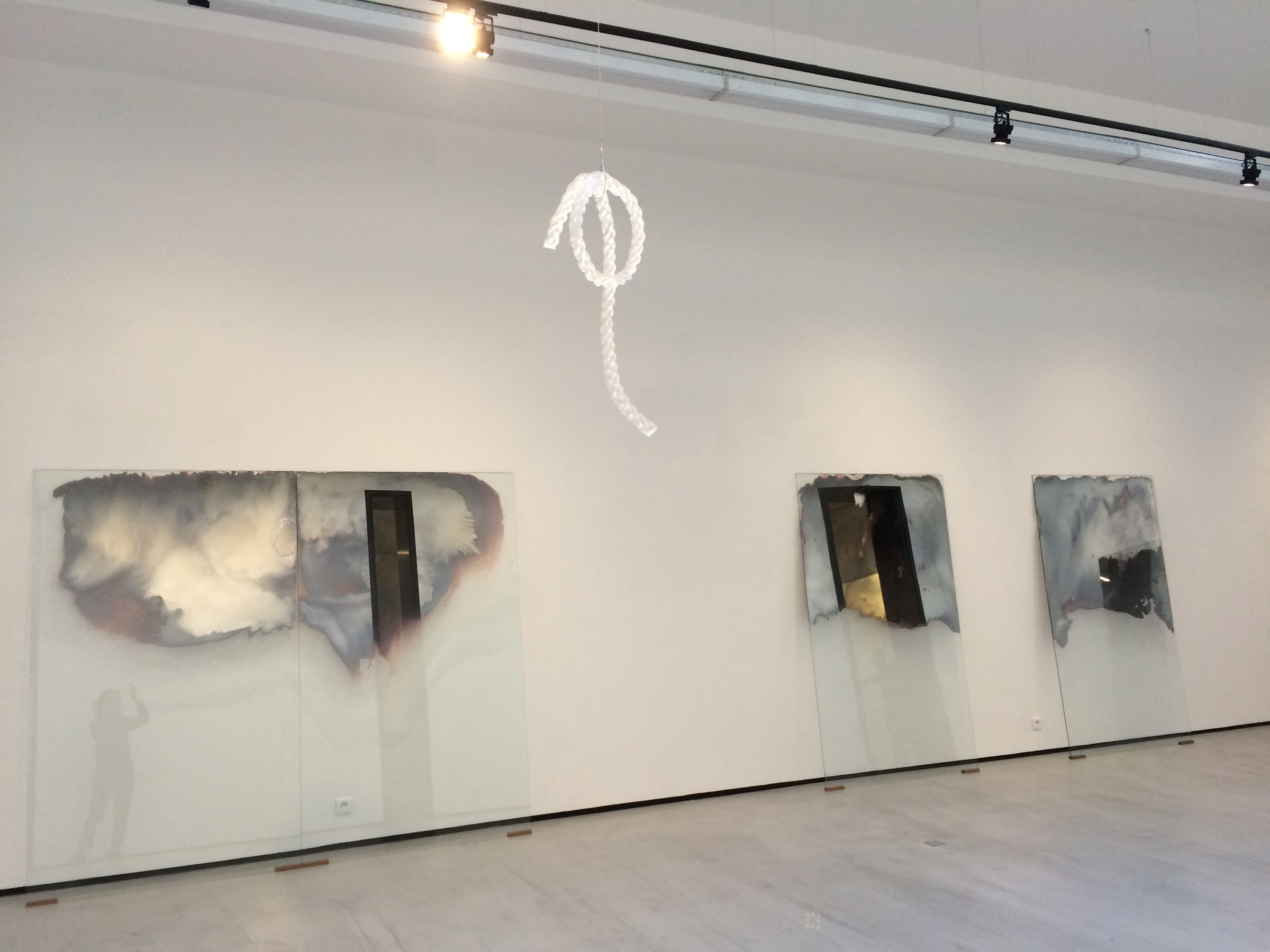 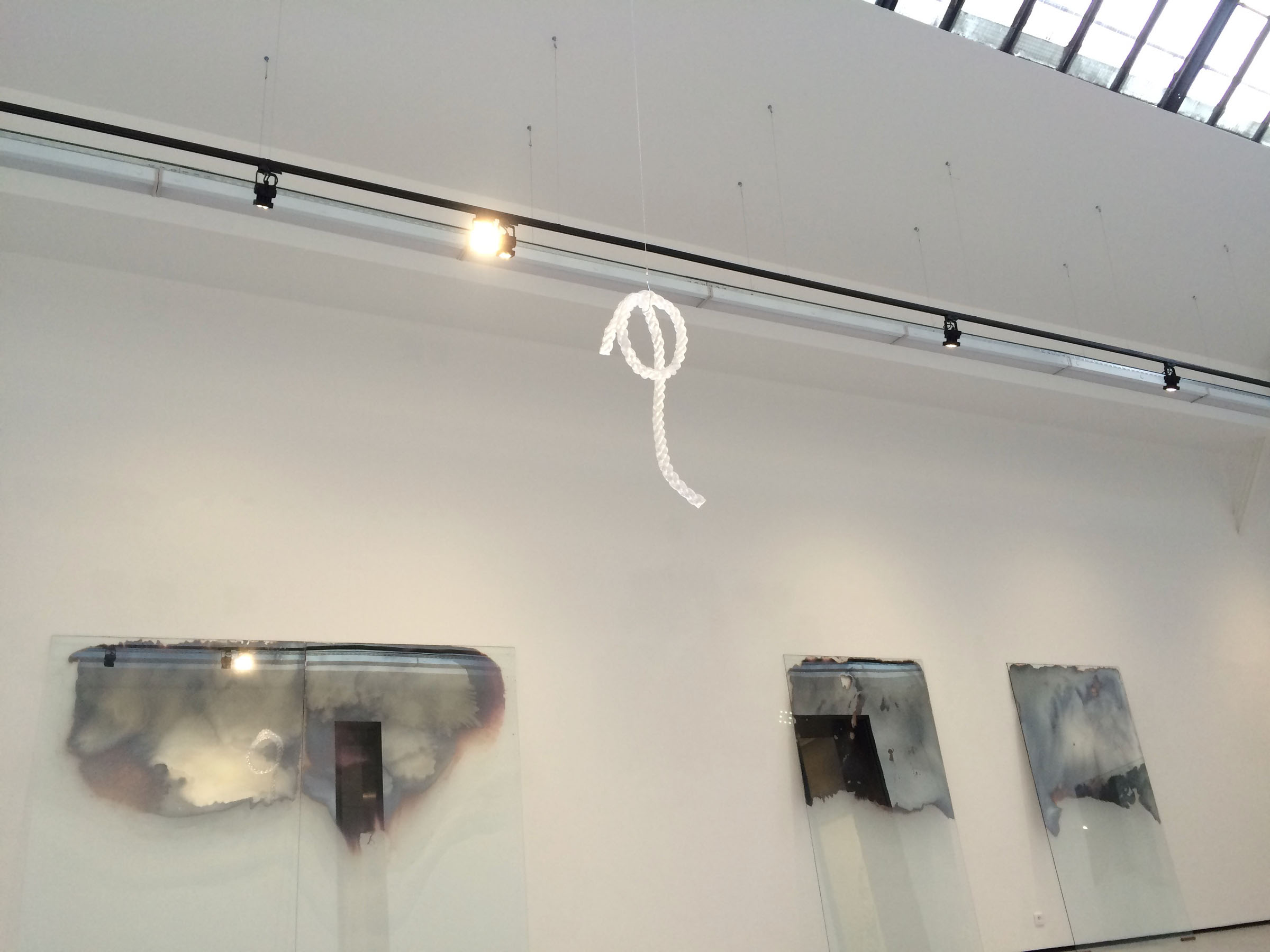 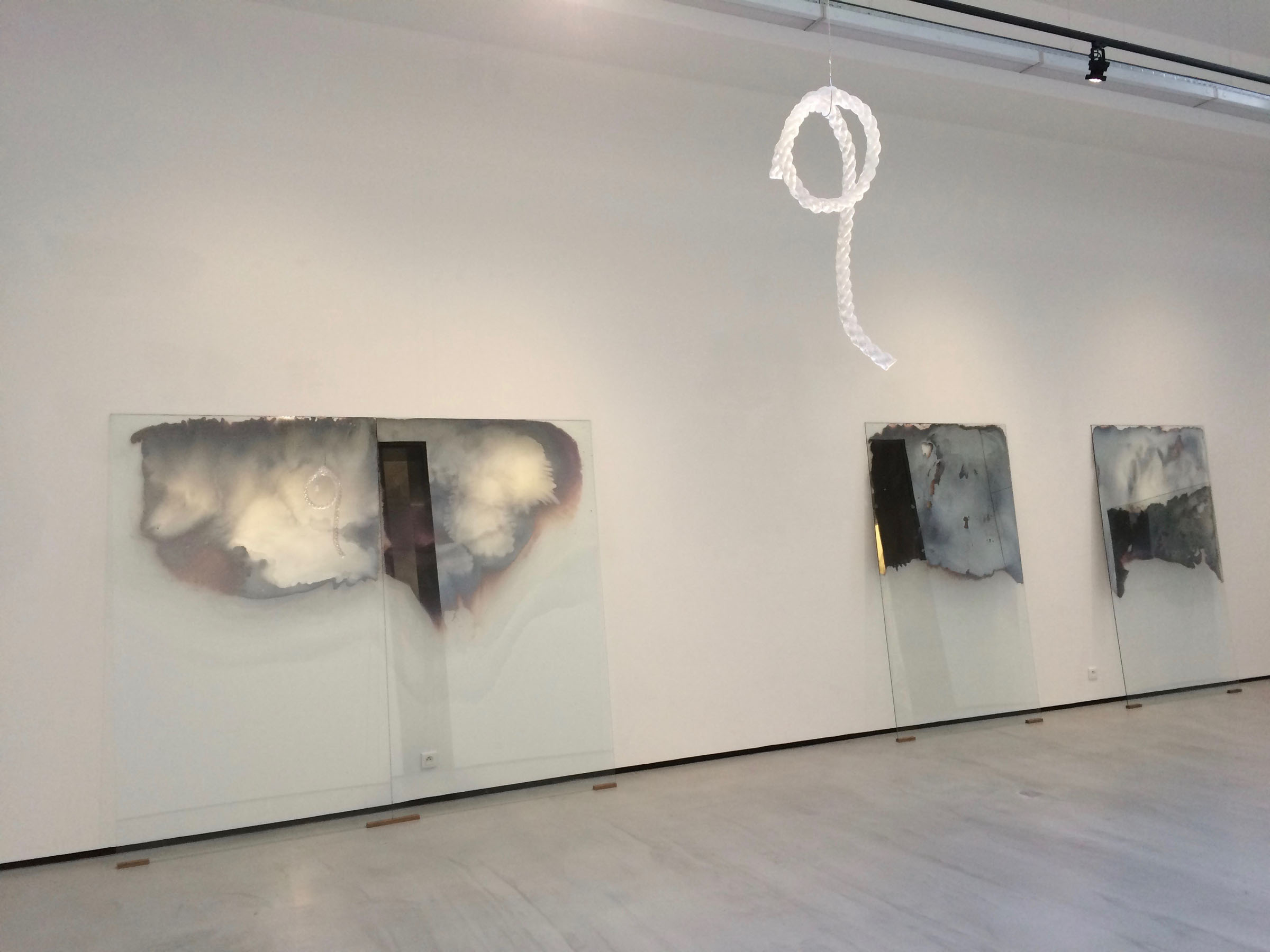 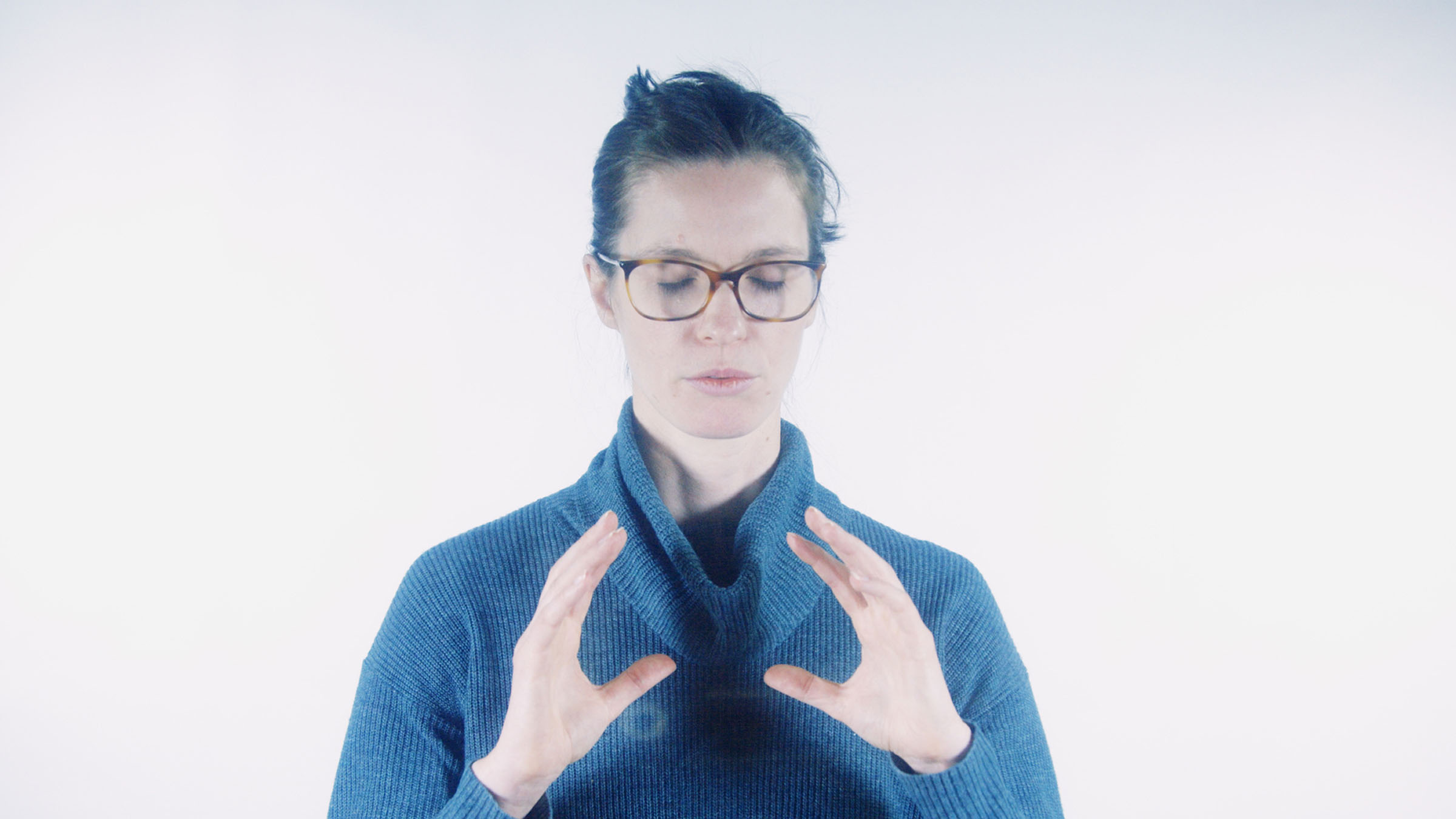 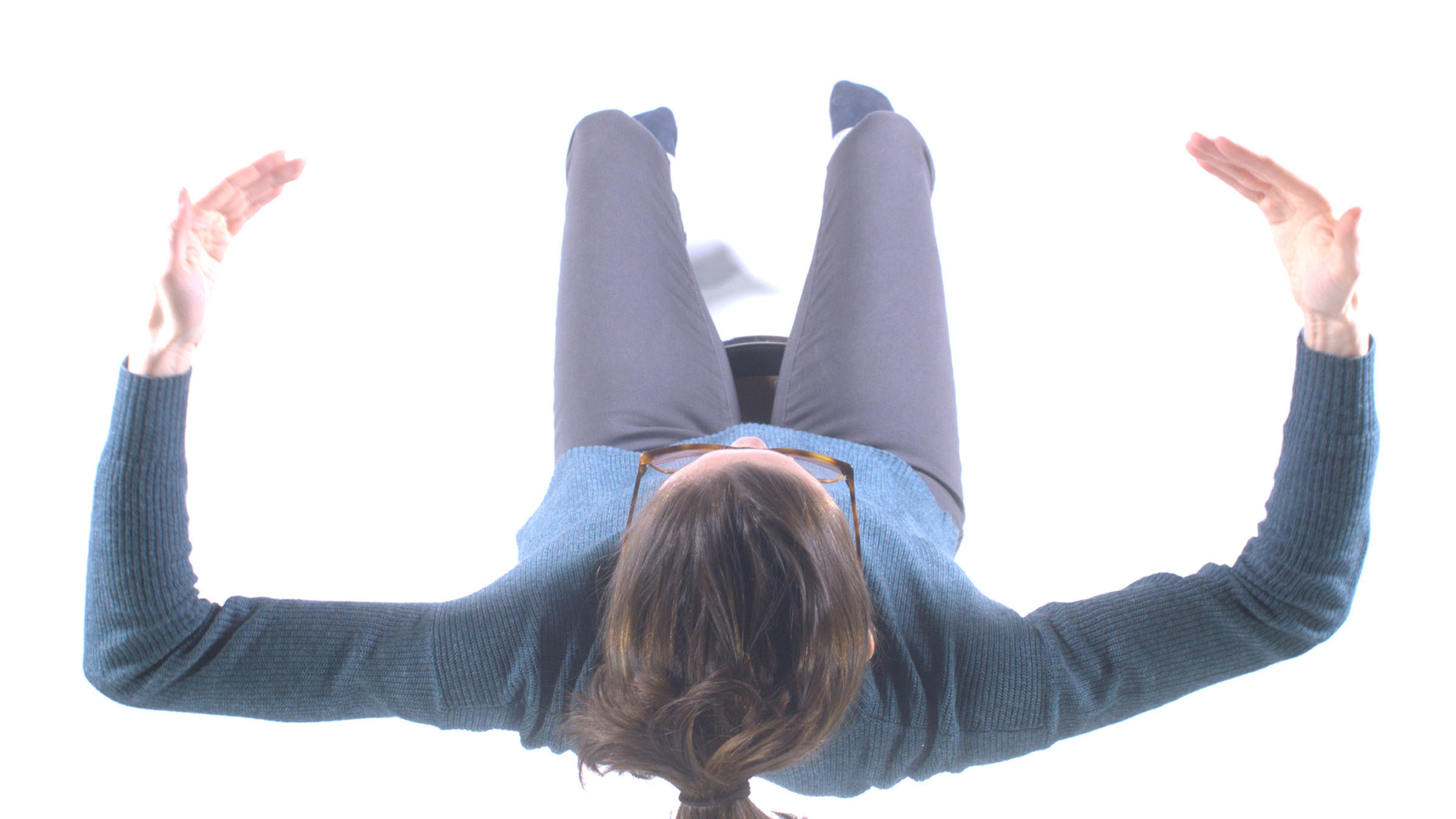 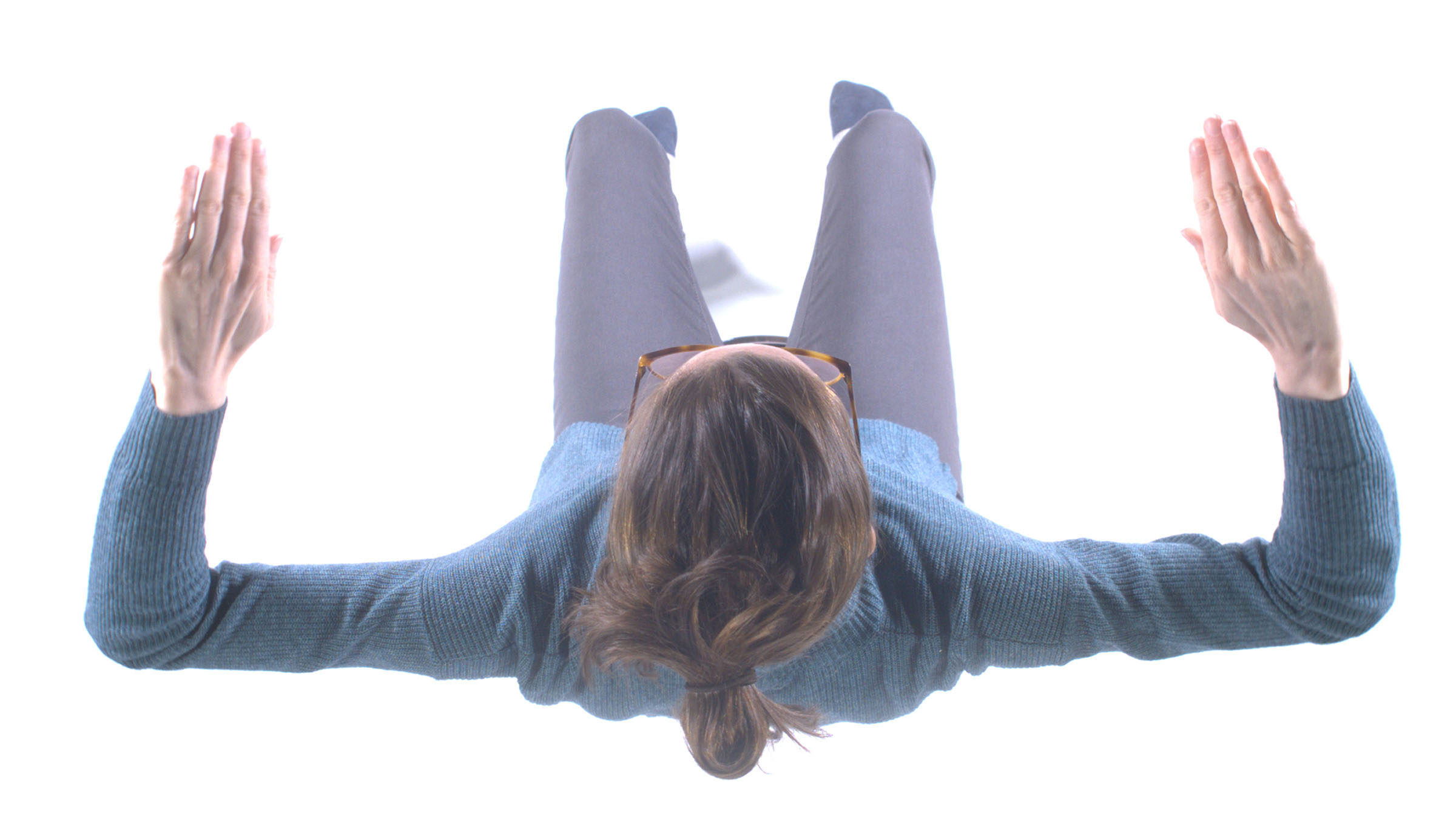 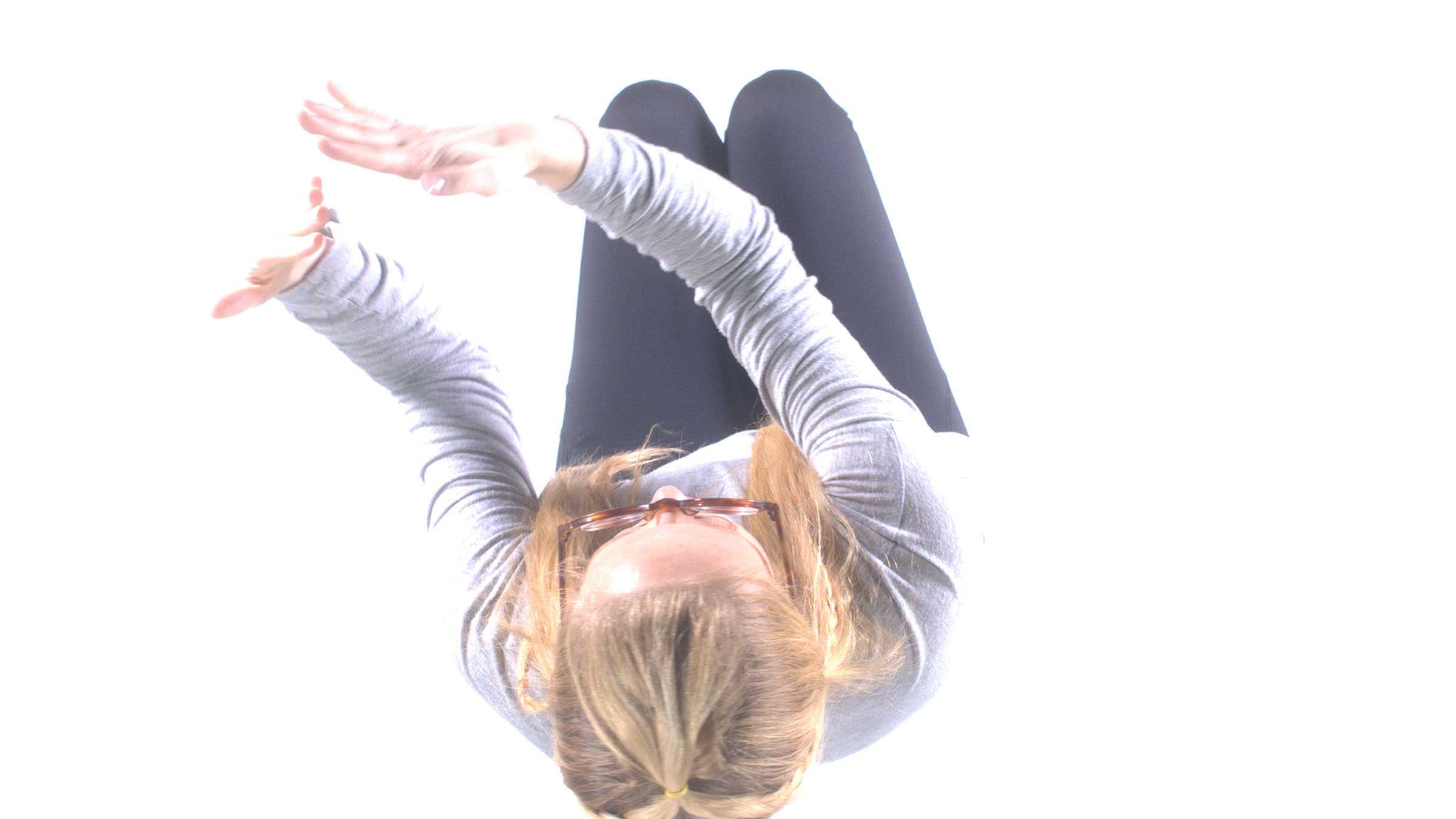 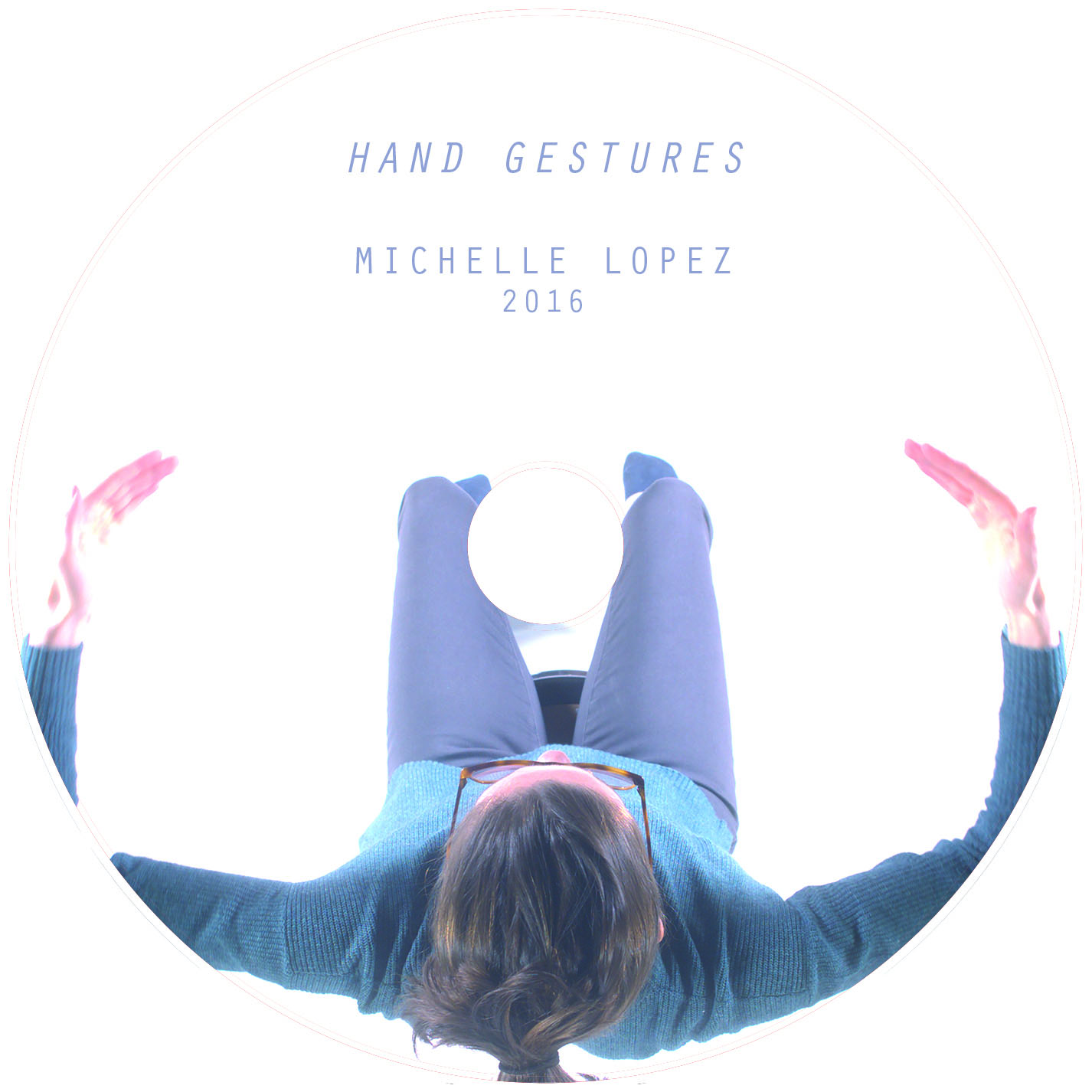 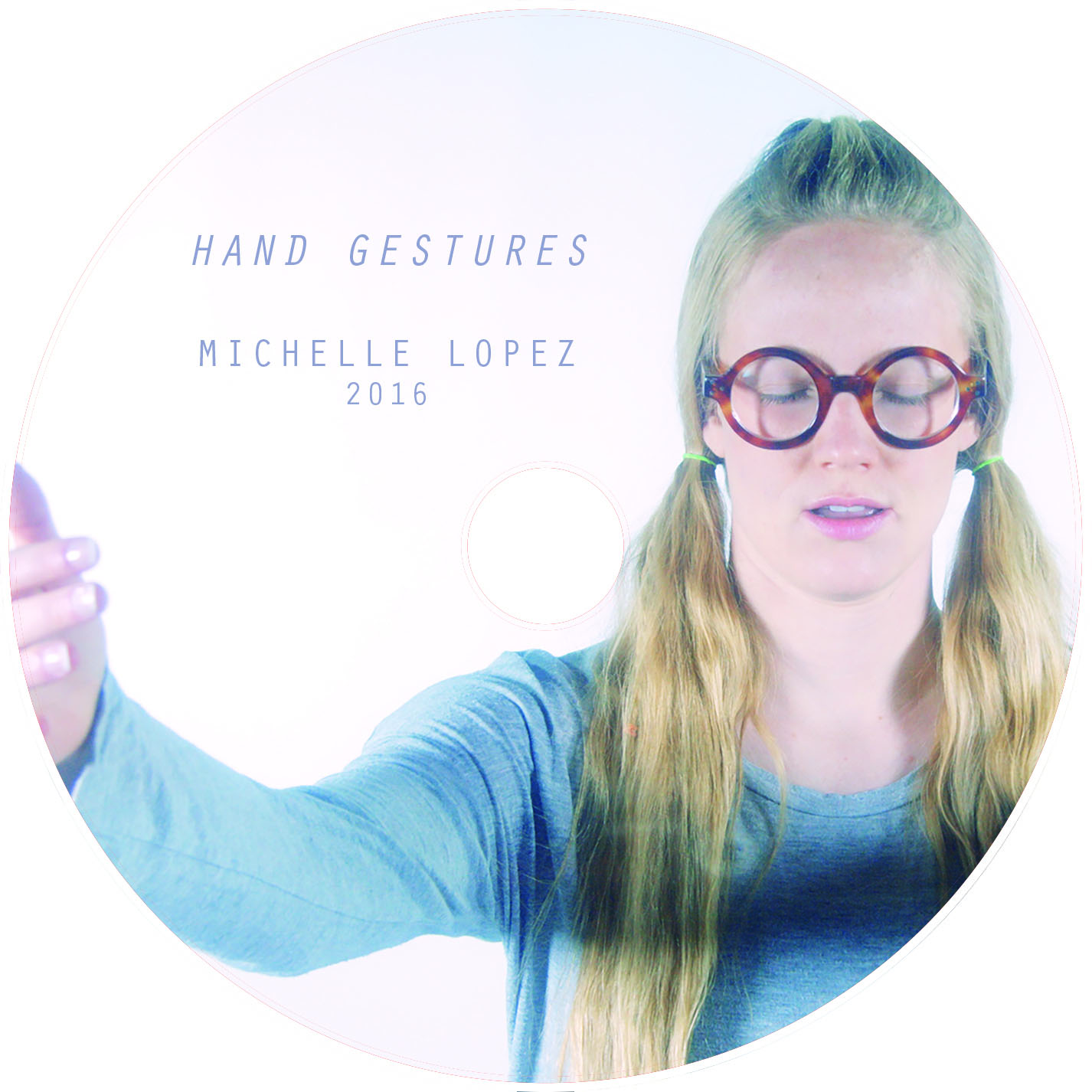 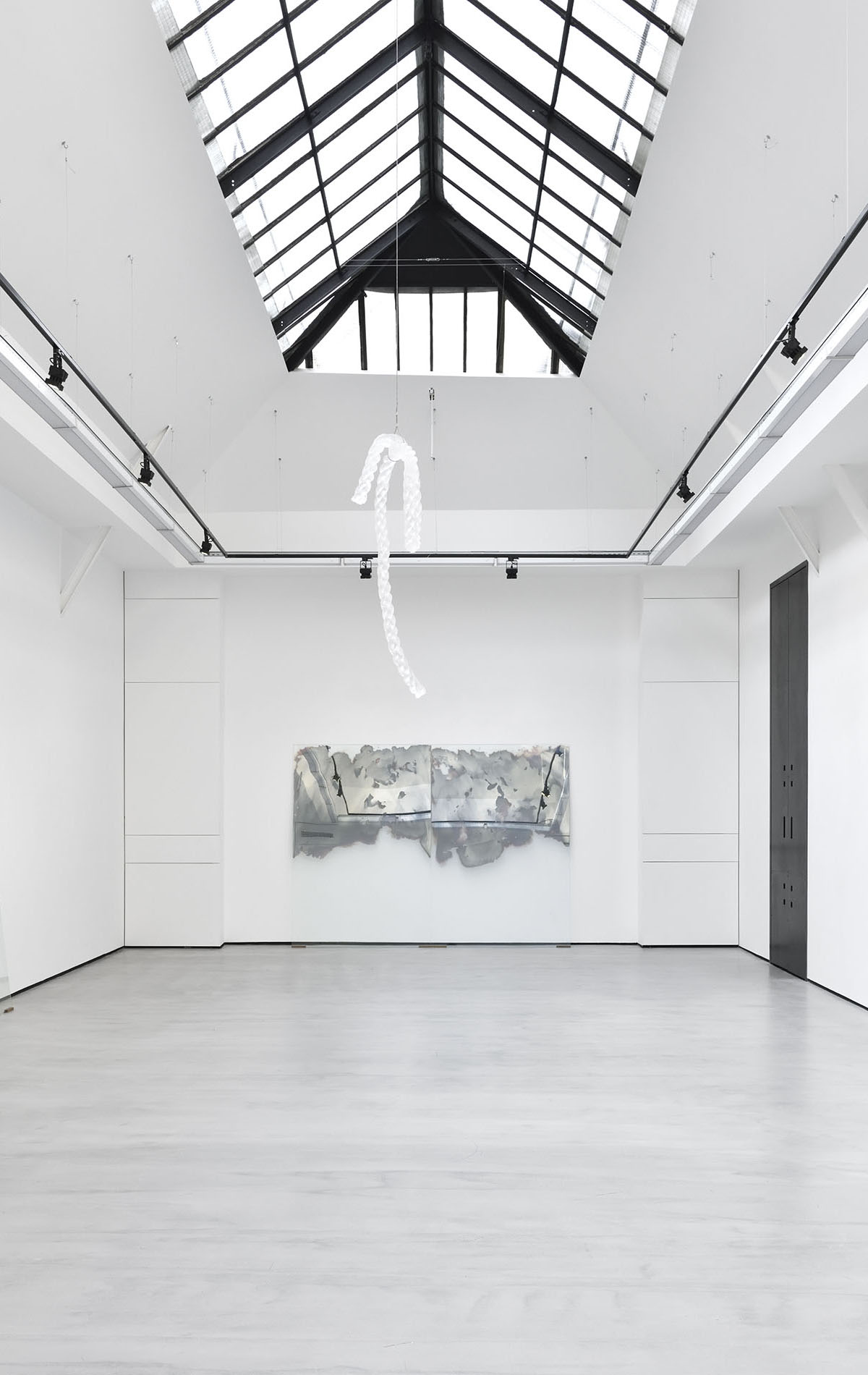 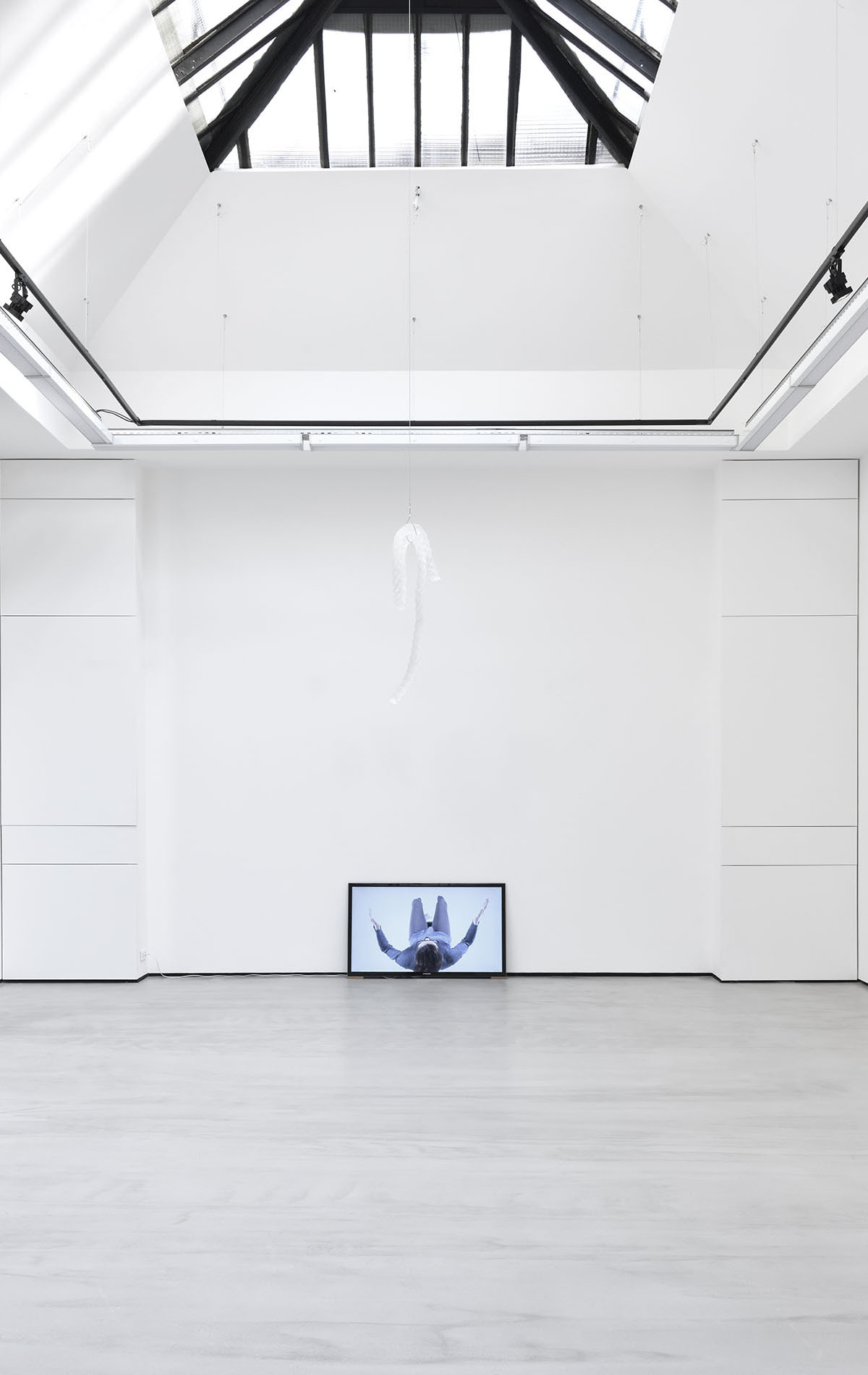 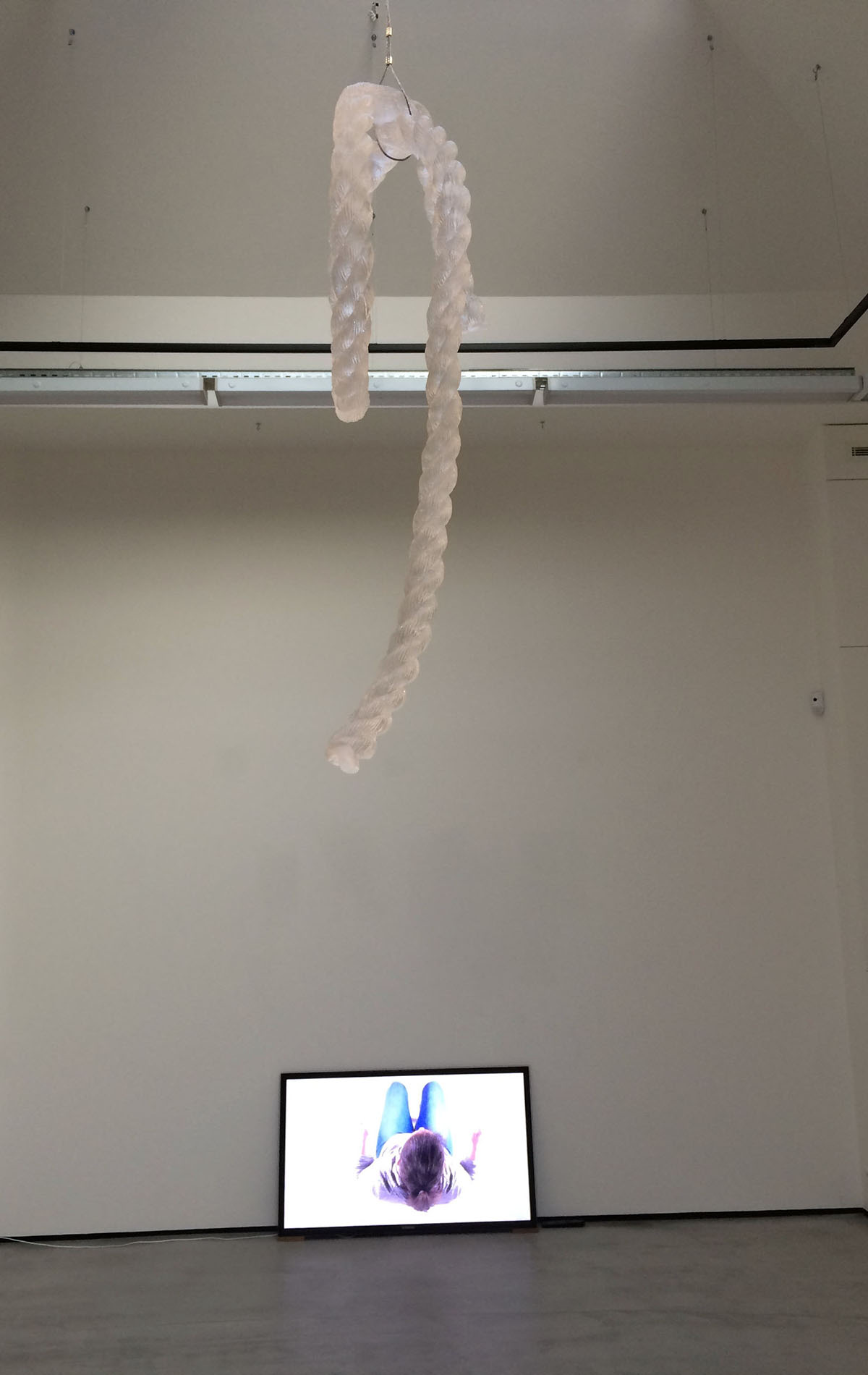 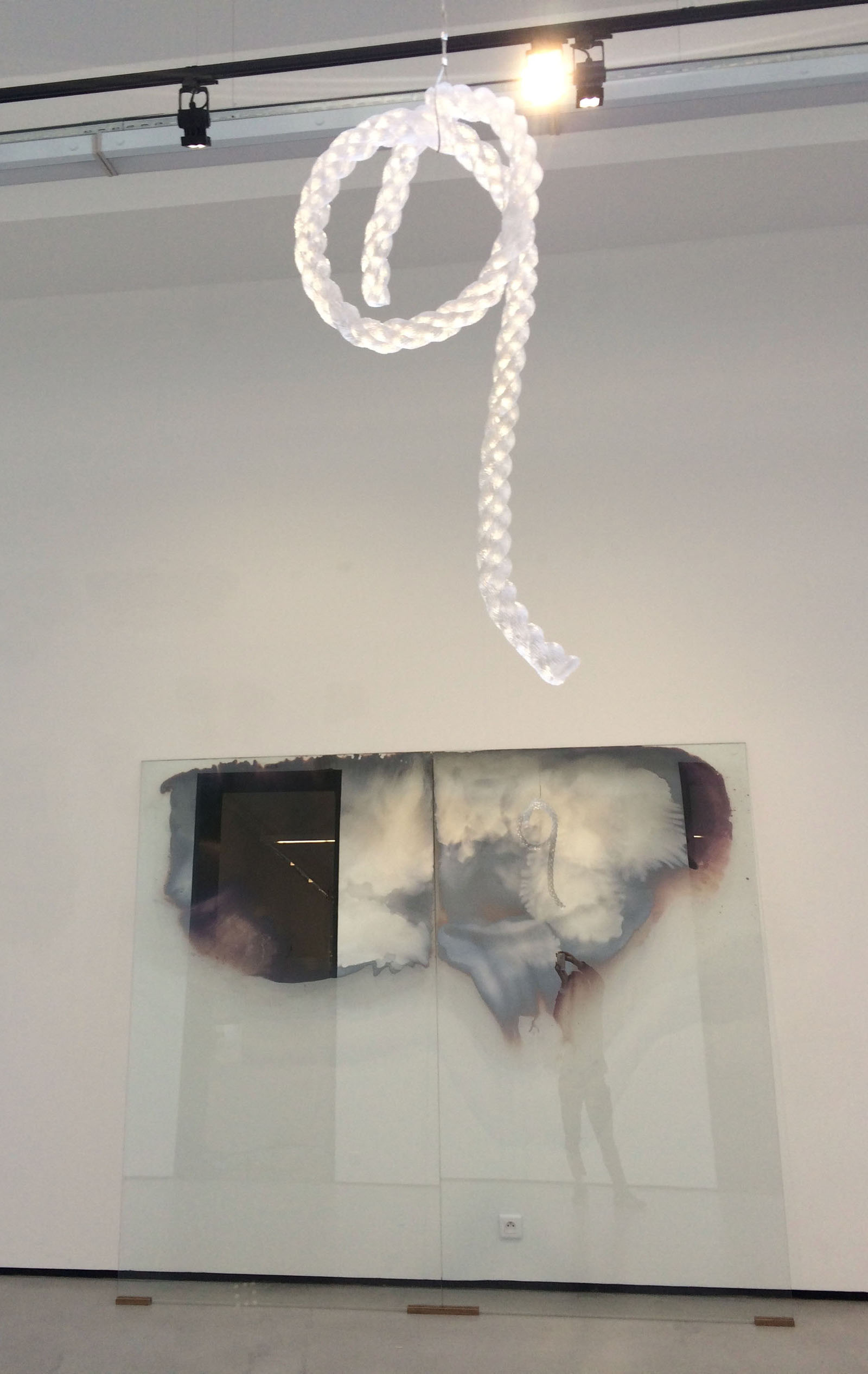 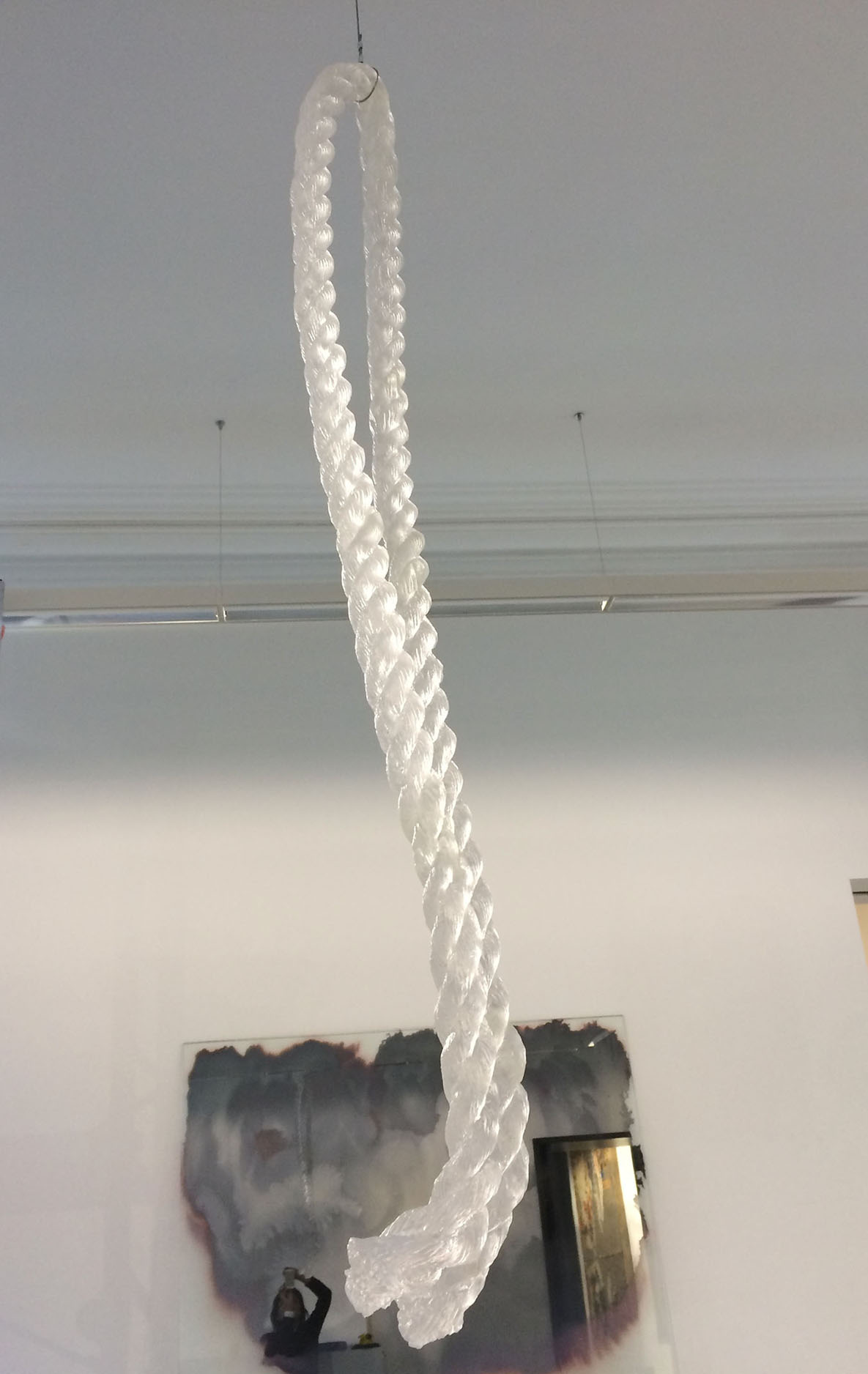 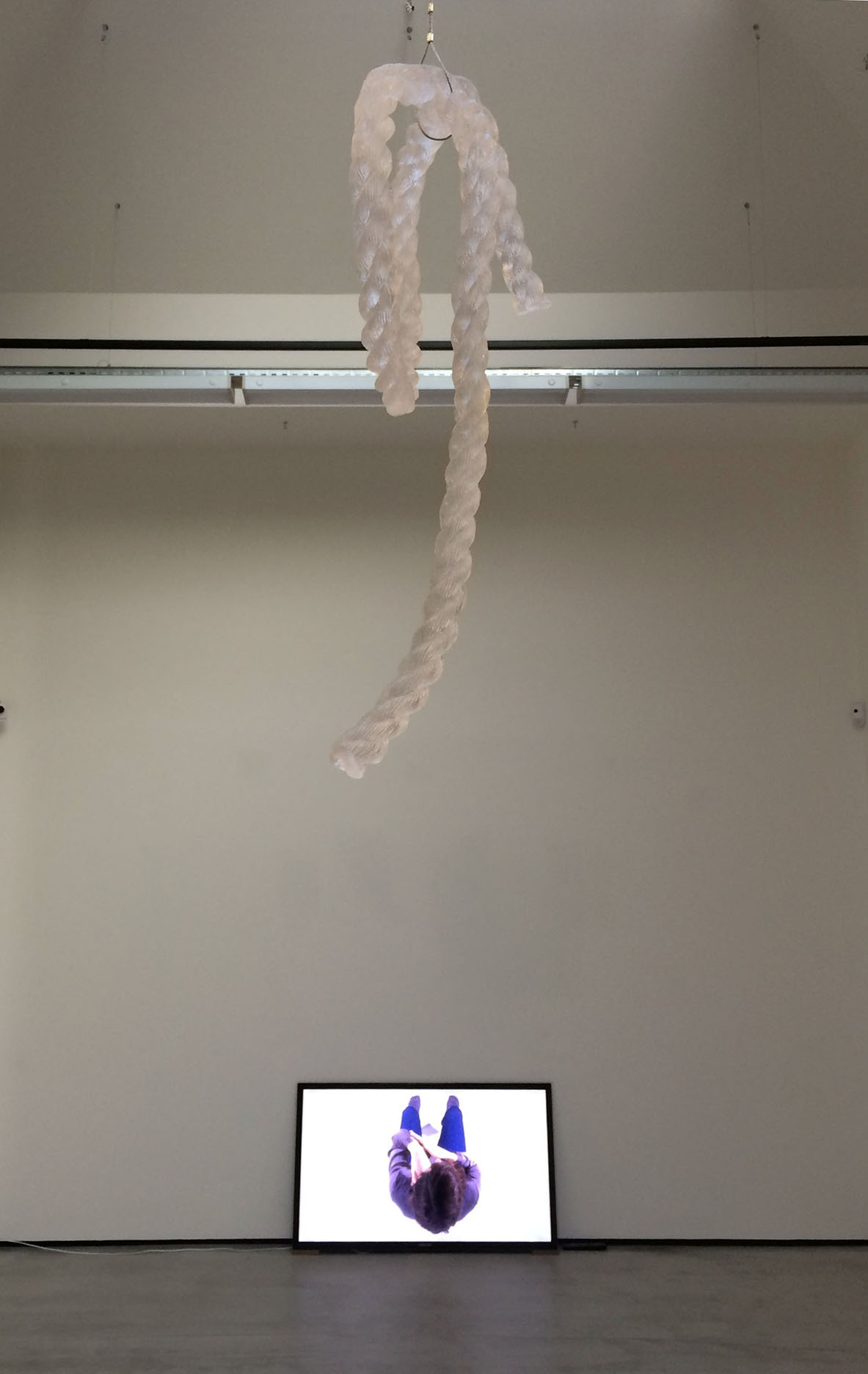 “Like the bodiless heads you see sometimes in circus sideshows, it is as though I have been surrounded by mirrors of hard, distorting glass. When they approach me they see only my surroundings, themselves, or figments of their imagination—indeed, everything and anything except me.”
― Ralph Ellison, Invisible Man

There are a few modalities that operate in my process of late: one involves the material of light, one considers the residue of the absent body; the other builds the unknown, imagined space that brings forward an object.

Smoke Clouds require blindness in the studio. Silver nitrate and tin, even glass, are allclear materials when I manipulate and combine them. Even light, as it etchesits rays into the glass in the process of "exposure", captures the air’s alchemy and the surrounding conditions in mysterious ways. I am pouring material that I can’t see. Only in the last moment, does the image appear.

All I know originates from my body: my body moves in a way to direct the material in order to find an ephemeral explosion or the residue of a past destruction. Sometimes the ghosts that the material captures are unable to render tension, and I must wipe away the gesture and begin again. My process requires my bodily participation to bring forward my presence and then ultimately it requires my removal, as the mirroring, environment, and the viewer’s body all create the space, not me. My removal of image and artist’s body are fundamental to Minimalism’s questions of representation.

Chandelier came from the desire to put forward the unrepresented body by inverting an otherwise "delightful," decorative centerpiece into an ignored American history. I borrowed the chandelier’s structure of suspension to hang a limp rope, curved to express a certain body language. I also took the chandelier's materials of light and glass, particularly lead crystal, so that its transparency and natural illumination could potentially become political. --"This is not a rope"-- but rather puts forward and pays homage to all the invisible bodies seen but not heard. It speaks to the residue of violence invisibly infused onto a landscape. Andre Breton's understanding of beauty as it must be "convulsive or will not be at all" is delicately explored in this work.

Chandelier with mirrored Smoke Cloud diptychs. Cloud image appears and disappears as a "puff of smoke" depending on the environment and viewpoint within the space. The self-abnegating nature of mirrors is that viewer and environment become the image as the mirror itself vanishes.

The video Invisible Object takes the light of the camera to document subjects describing: an object as it appears to them in a dream or unfamiliar space; an object they cannot name or understand. The subjects are placed in front of a two-way mirror and recall with eyes closed, through verbal language and physical body gesturing, the shape of things. The subjects’ body language mirrors each other and collapses in onto themselves to build one large imagined object through time. The title of the piece is taken from Giacometti’s Hands Holding the Void-- a figure holding that pregnant space of nothing and everything. My video tries to continue this idea to allow the subjects to imagine the space “in between”, in order that they may build an object that vanishes, once they open their eyes and look in the mirror.

With eyes shut, subjects recall shapes of objects from dream or unfamiliar spaces or object they cannot name or understand. The multiple subjects’ body languages mirror one another and collapse onto themselves to build one collective, imagined object through space and time.