"Simon Preston is pleased to present Michelle Lopez's first solo exhibition at the gallery, The Violent Bear It Away, which opens to the public on Saturday, March 21, and runs until Sunday, May 17, 2009.

This is the artist's first exhibition in New York since her show at Deitch Projects in 2001. It consists of three new sculptures, each masking a subtext of terrorist warfare. The installation explores an abject form of violence and entropy that marks an evolution of themes the artist has continued to investigate: the human condition and how the physical body and physical iconography are transformed through tragedy and human experience. The title of the exhibition, The Violent Bear It Away, references a novel by Flannery O'Connor exploring themes of destiny, destruction and redemption through a symbolic act of baptism, by violent drowning.

Woadsonner (edit), 2009, a leather-covered car originally commissioned by The Public Art Fund in 2000, is re-configured as crushed and gently slouches against the wall. In an attempt to reconcile her artistic past, Lopez employs the gesture of destroying and dismantling her sculpture to respond to the pop perfection of her earlier works. Here the edit is the elimination of all adornment, eschewing conventional beauty and commercial value, in search of a renewed, re-defined present. In this instance, Woadsonner (edit) is raw, unfinished, brutalized and effectively redeemed.

The second work, Portrait of Artist as Special Mission Project/Akira Revisited, 2009, depicts a disembodied Japanese Anime wig that has crashed to the ground. It responds directly to the Japanese Super flat movement and particularly Murakami's Special Mission Project Ko2, a series of three sculptures in which a cyborg woman is transformed into a plane. While acting as self-portraiture, it complicates the male gaze of the superflat legacy. The artist's decision to cast the object in soot (ash) further complicates the reading. The slick toy fetish has the materiality of debris from a burnout.

Lastly, Southern Trees/Black September, 2009, at first appears as a wooden stump jutting from the wall. On the other side, however, a huge tree branch extends to fill the gallery, cantilevered with ropes and sandbags for support. A single excerpt is cast in matte white resin, creating a ghost-like limb that hangs awkwardly from the branch to the floor. The title references Billie Holiday's "Strange Fruit," as well as the events of September 6, 1970, the Dawson's Field hijackings, the Black September of Jordan, hauntingly similar in structure to that of September 11th and coincides with the artist's date of birth.

Simon Preston Gallery would like to thank New York City Department of Parks & Recreation, Manhattan Forestry for their very generous help and support. This exhibition is accompanied by an illustrated catalogue with texts by Carissa Rodriguez and Jeffrey Uslip."

Michelle Lopez: The Violent Bear It Away, Simon Preston Gallery, March 21 to May 17,2009 excerpts from the press release. 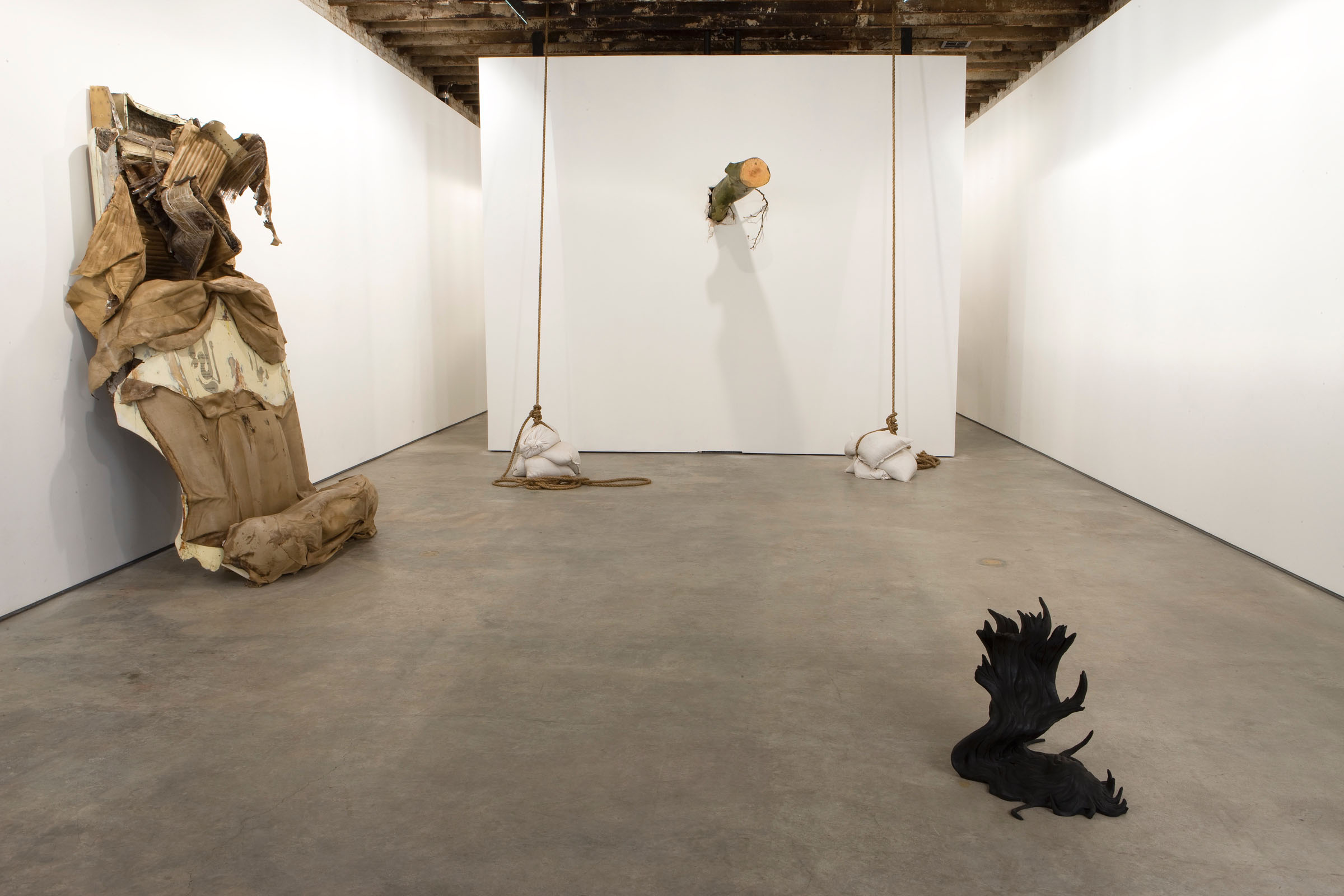 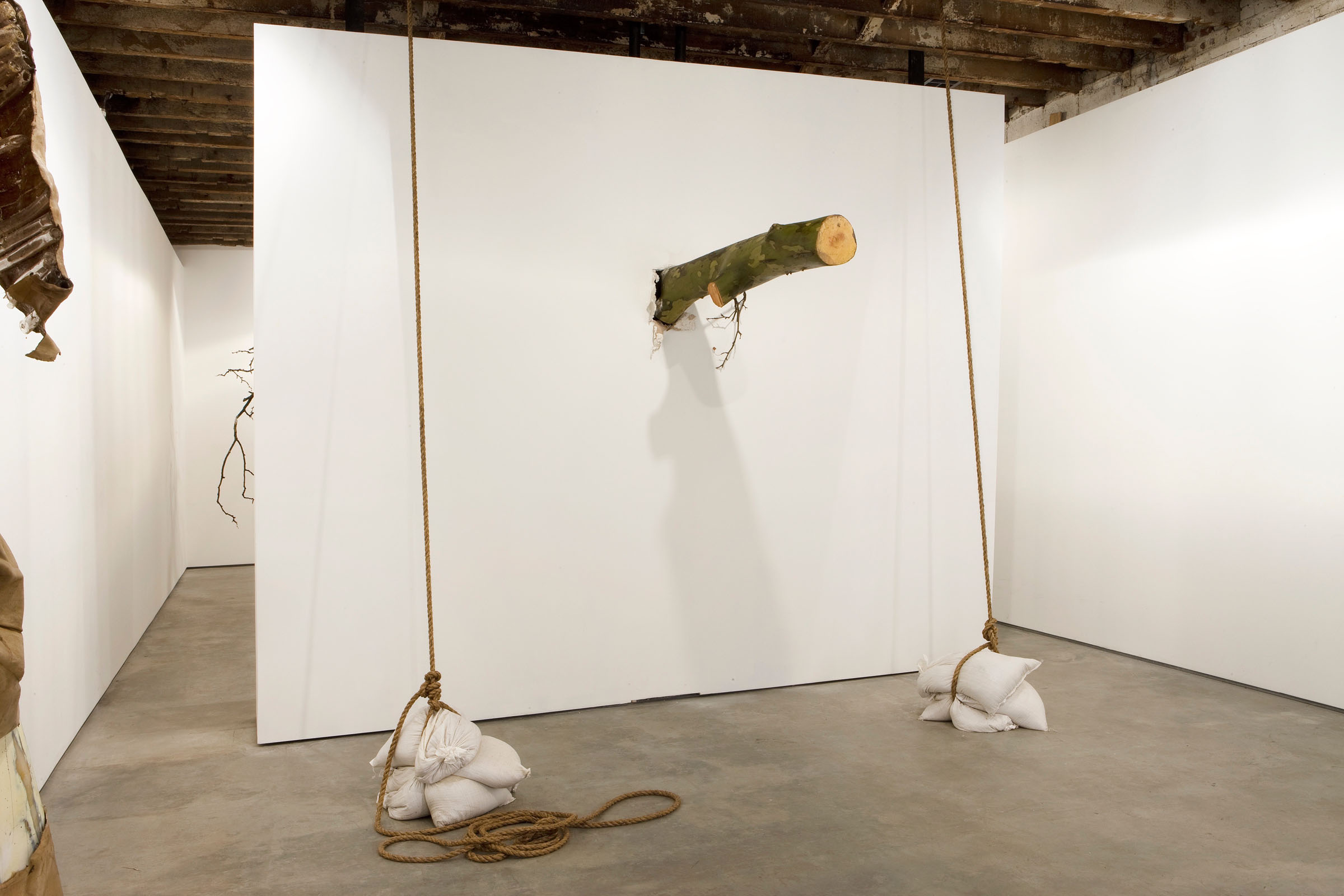 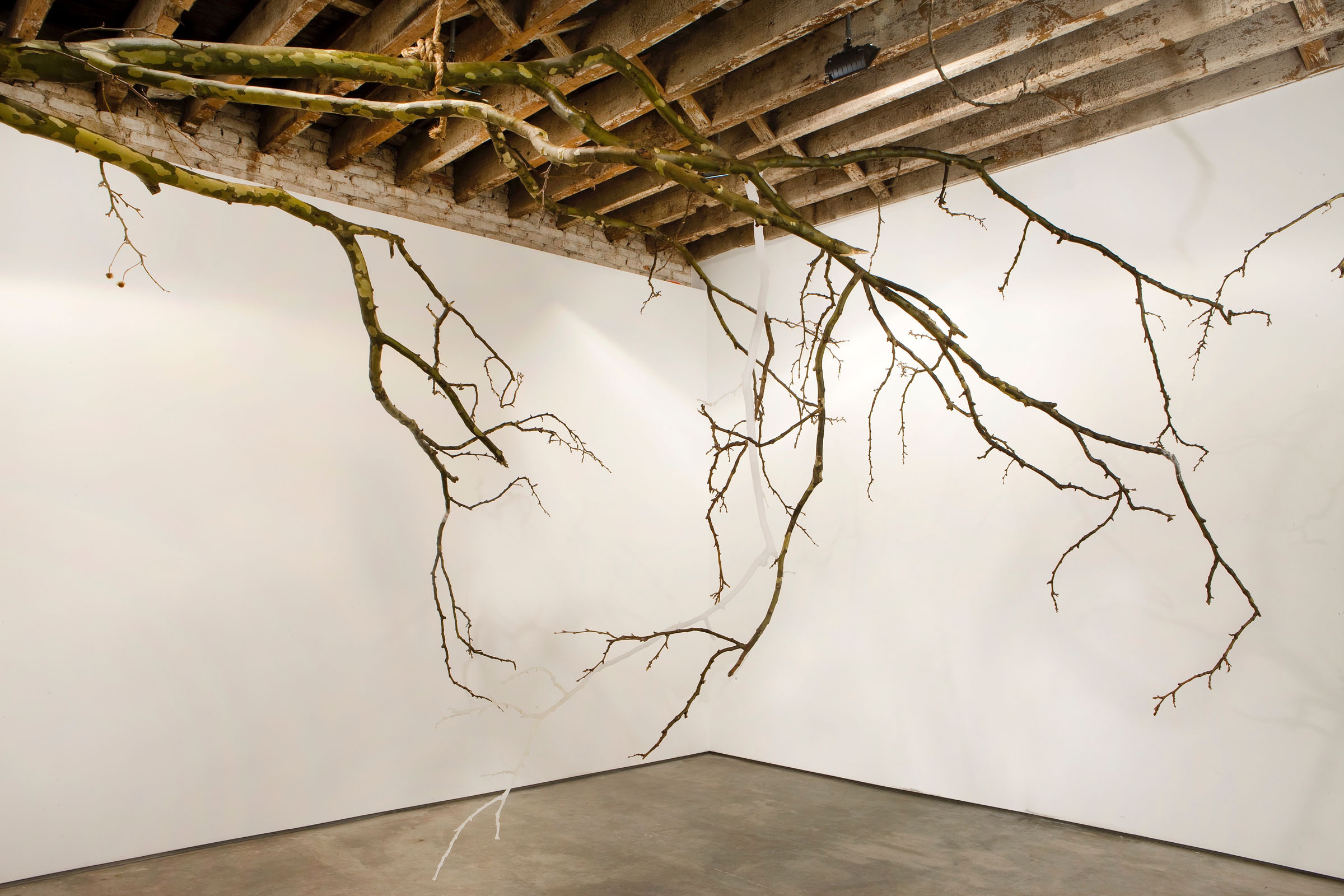 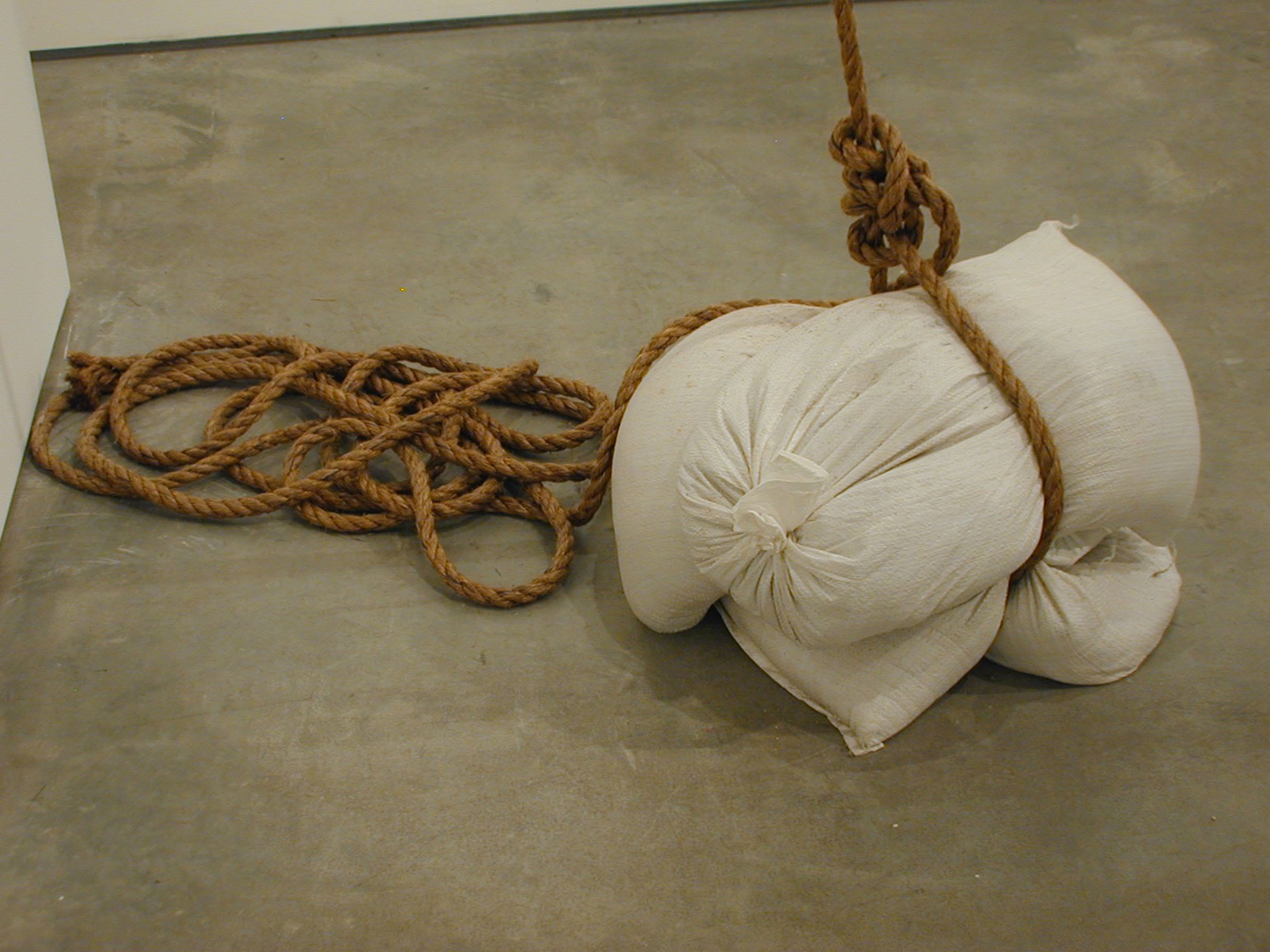 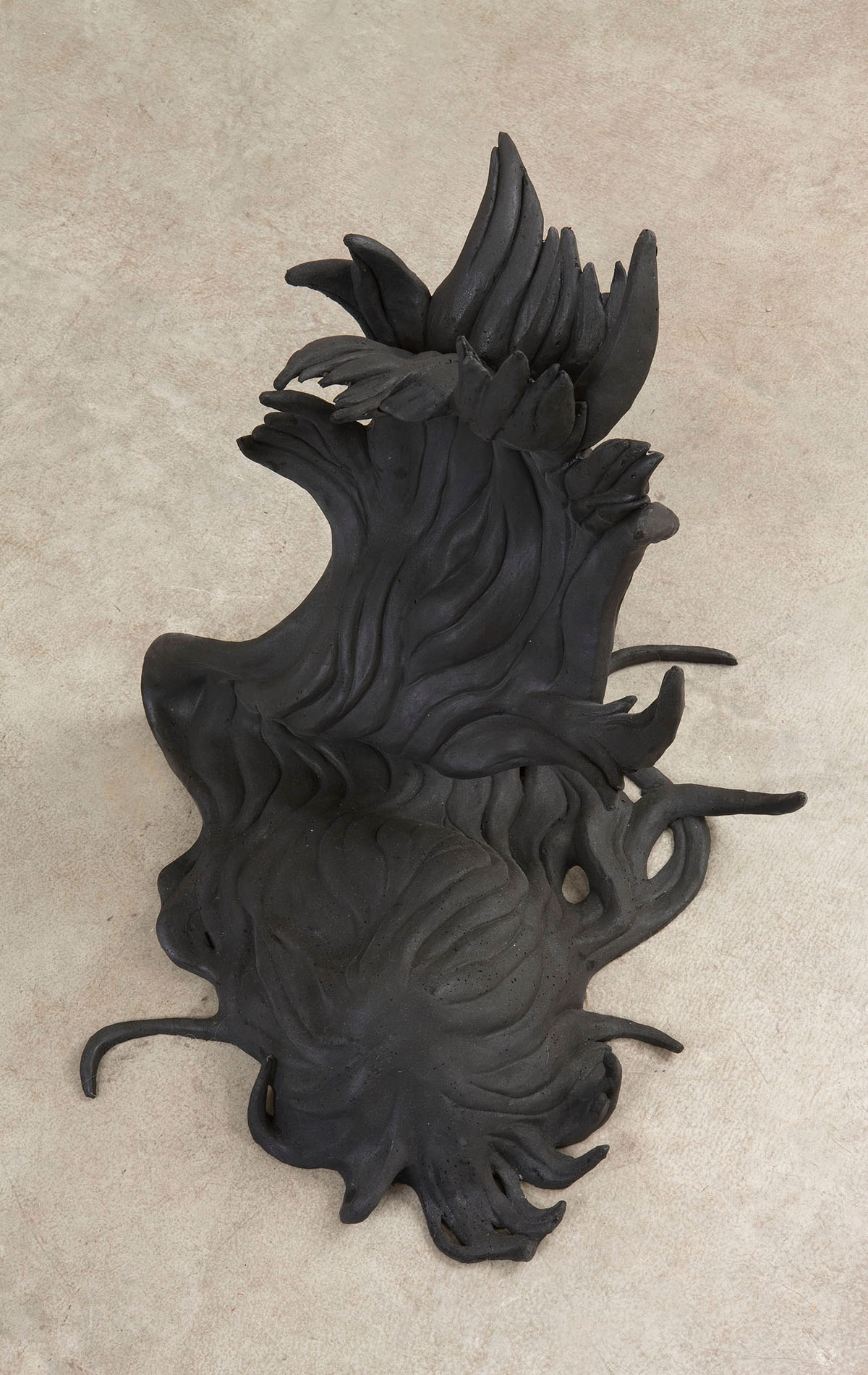 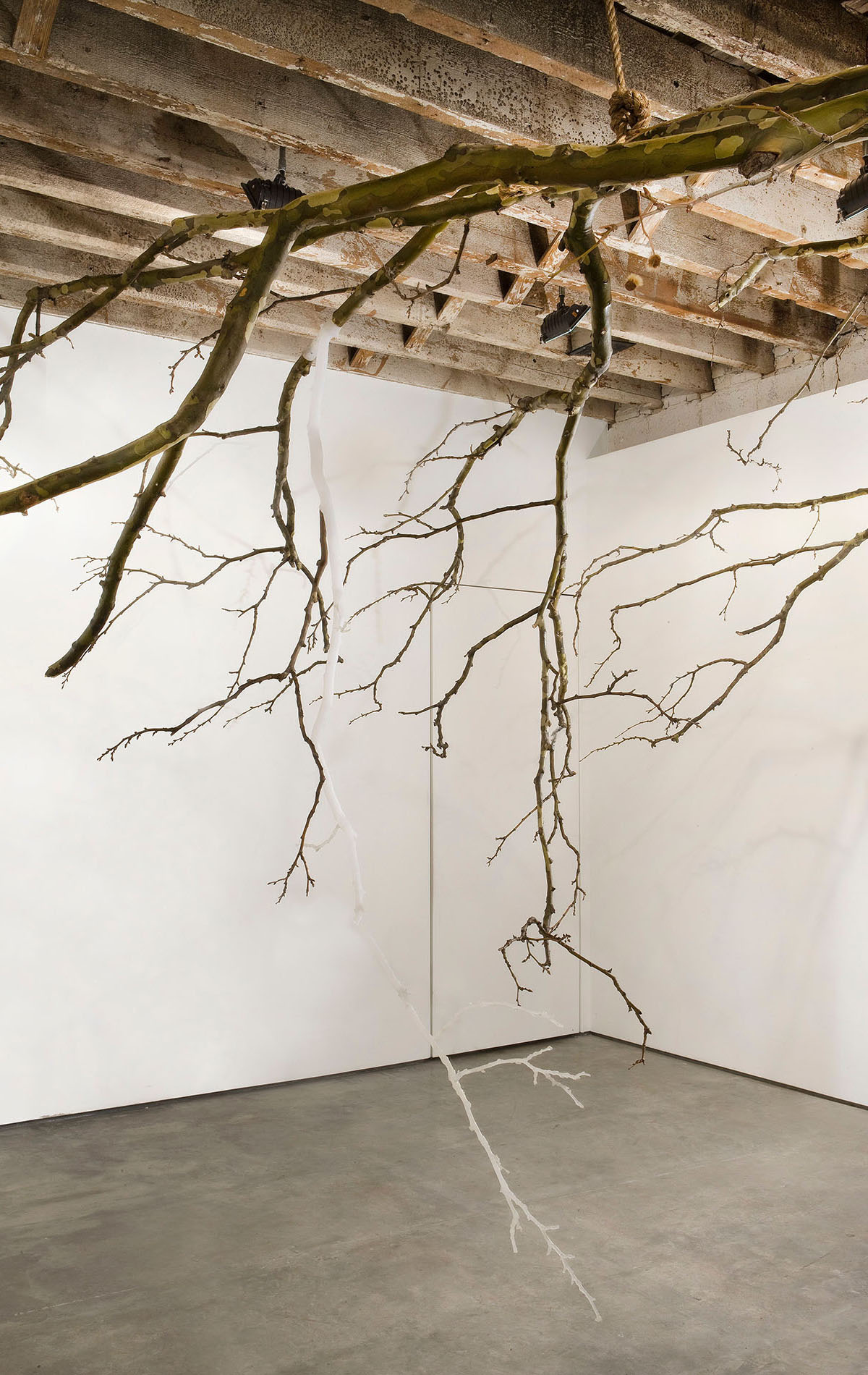 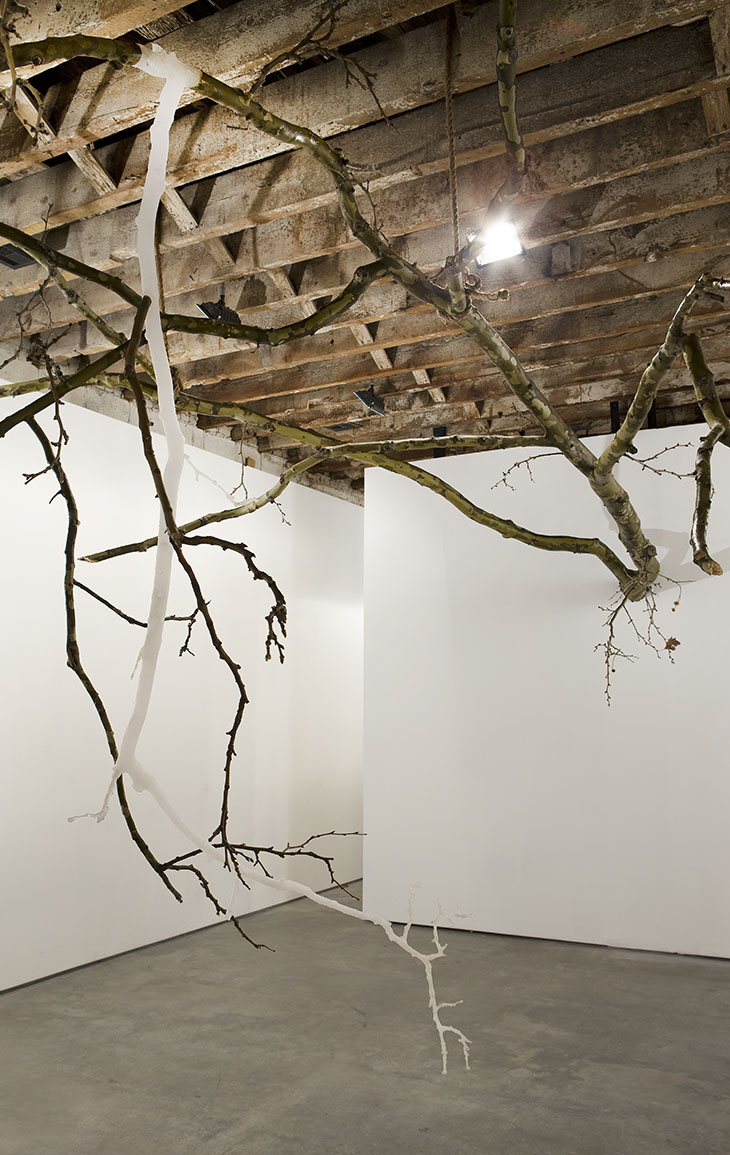 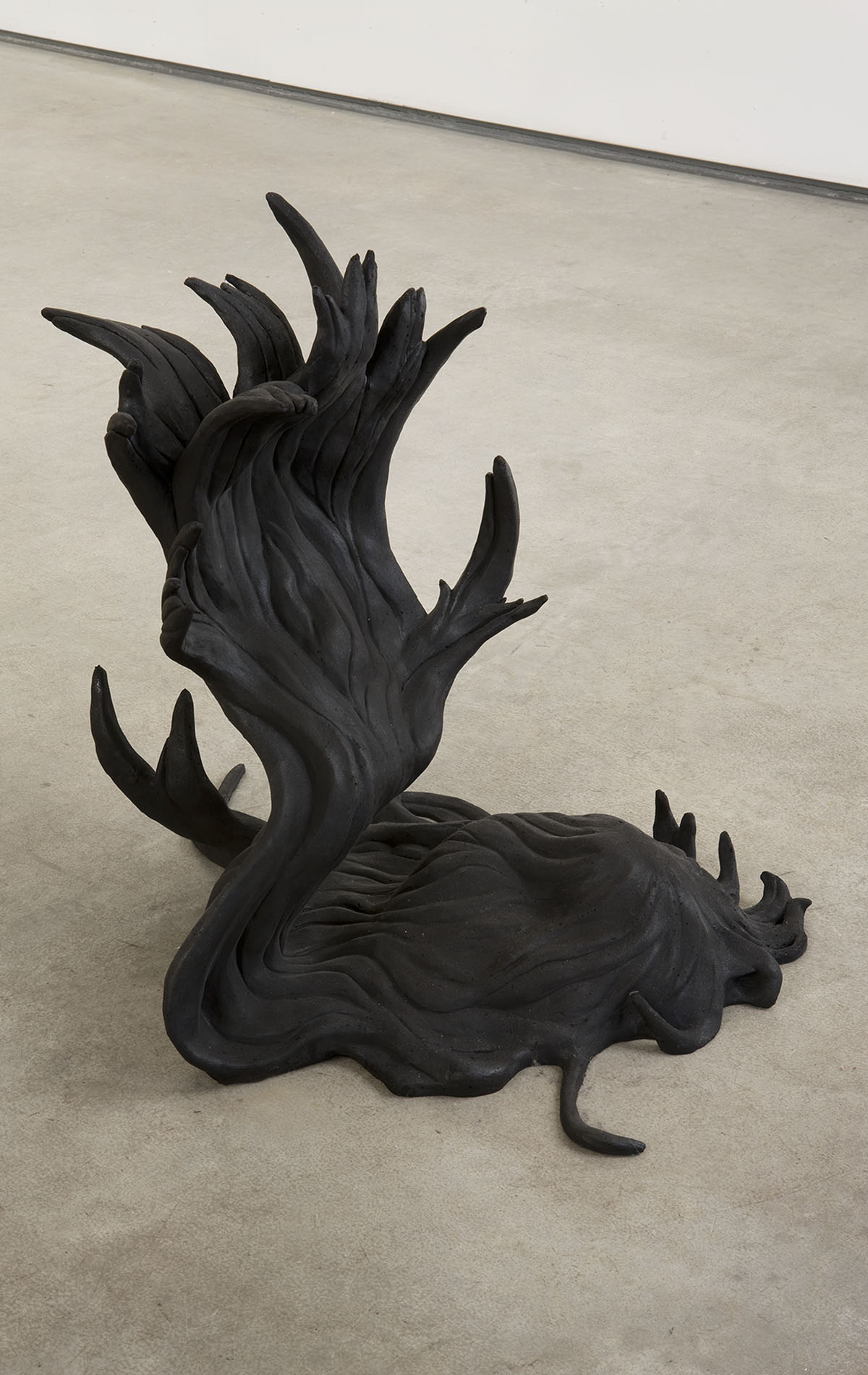 Felled Sycamore tree thrust through wall and supported by ropes/sandbags. Grafted into the tree is a ghost-like prosthetic branch. And “Portrait of the Artist, Special Mission Project/Akira revisited”: a satirical self-portrait as Asian Female, specifically, Murakami’s fetish-ized cartoon specimen inverted. The hyper-stylized hair is cast out of soot from a burn-out, the shape of the tresses are emergency flames, and the faceless, beat-down wig complicates the male gaze.

Notes: Installation view of a NY solo show at Simon Preston Gallery after an 8-year hiatus. The three works explore destruction of my past iconography, identity, and artistic process through physical acts, parodies, and exercises in self-portraiture. I explored violence as a form of redemption and regeneration.