"When You Cut into the Present the Future Leaks Out welcomes the public to enter and re-discover the cavernous interior of the Old Bronx Borough Courthouse that has been shuttered for 37 years.

The title of the show—a quote in reference to the process of Beat generation poet, William S. Burroughs—alludes to anapproach to the site: the cutting, splicing, re-shuffling, re-wording, and re-purposing is attributed to not only the ongoing physical renovation of thebuilding, but also to the speculation of its future role. How can this building transgress its past and ignite a new way into the future?

Twenty-seven New York artists were invited to use the monumental building as a creative production site, a character in a film, a sculptural form, a setting for dance performances, and a locale forcommunity gatherings. Selected artworks and site-specific installations insculpture, fresco painting, sound, and video are installed throughout the lower level, ground floor, and first floor."

Curated by Regine Basha for No Longer Empty

- “When You Cut to the Present The Future Leaks Out,” curated by Regine Basha, for No Longer Empty, Old Bronx Courthouse, excerpts from press release

When you Cut into the Present the Future Leaks Out 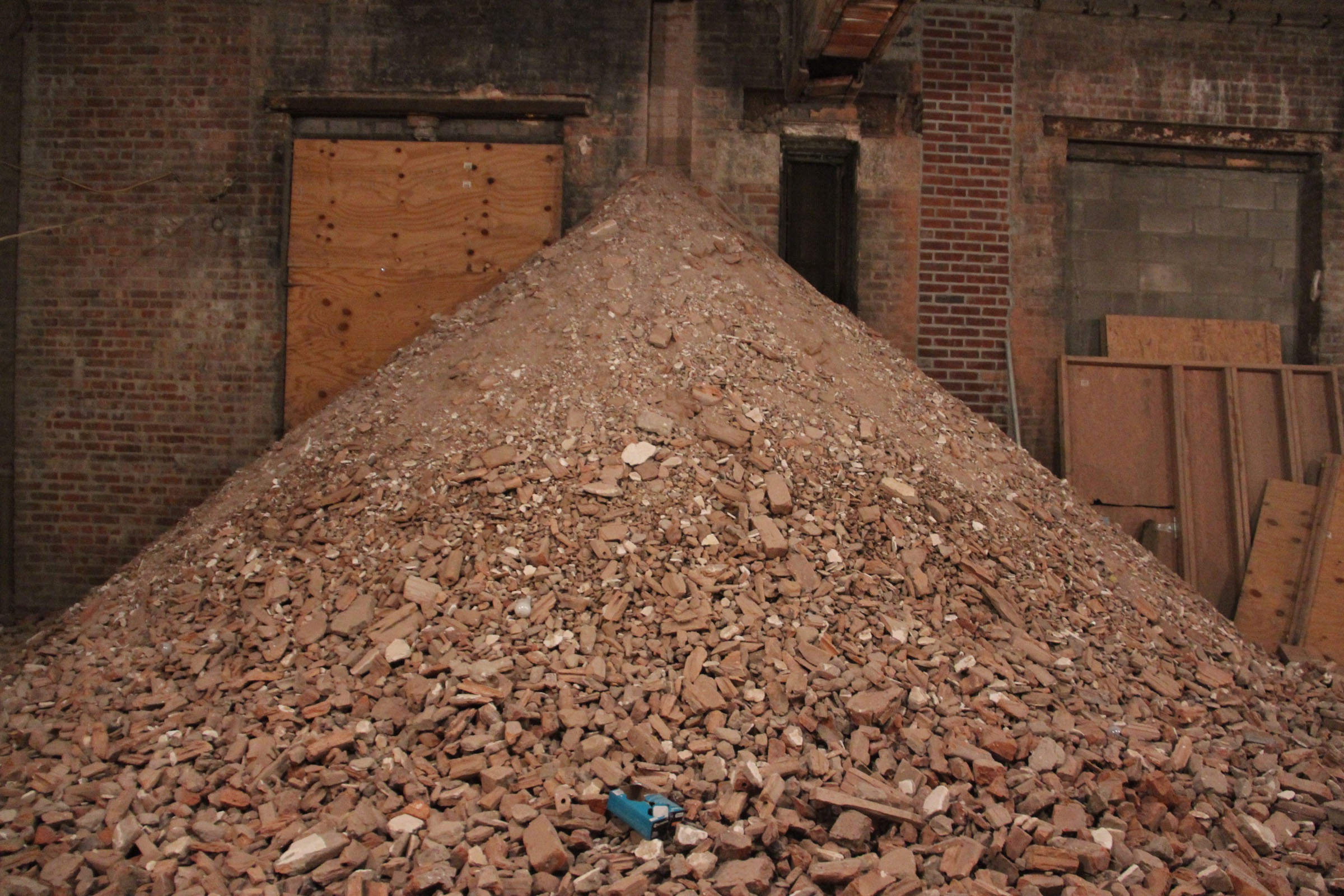 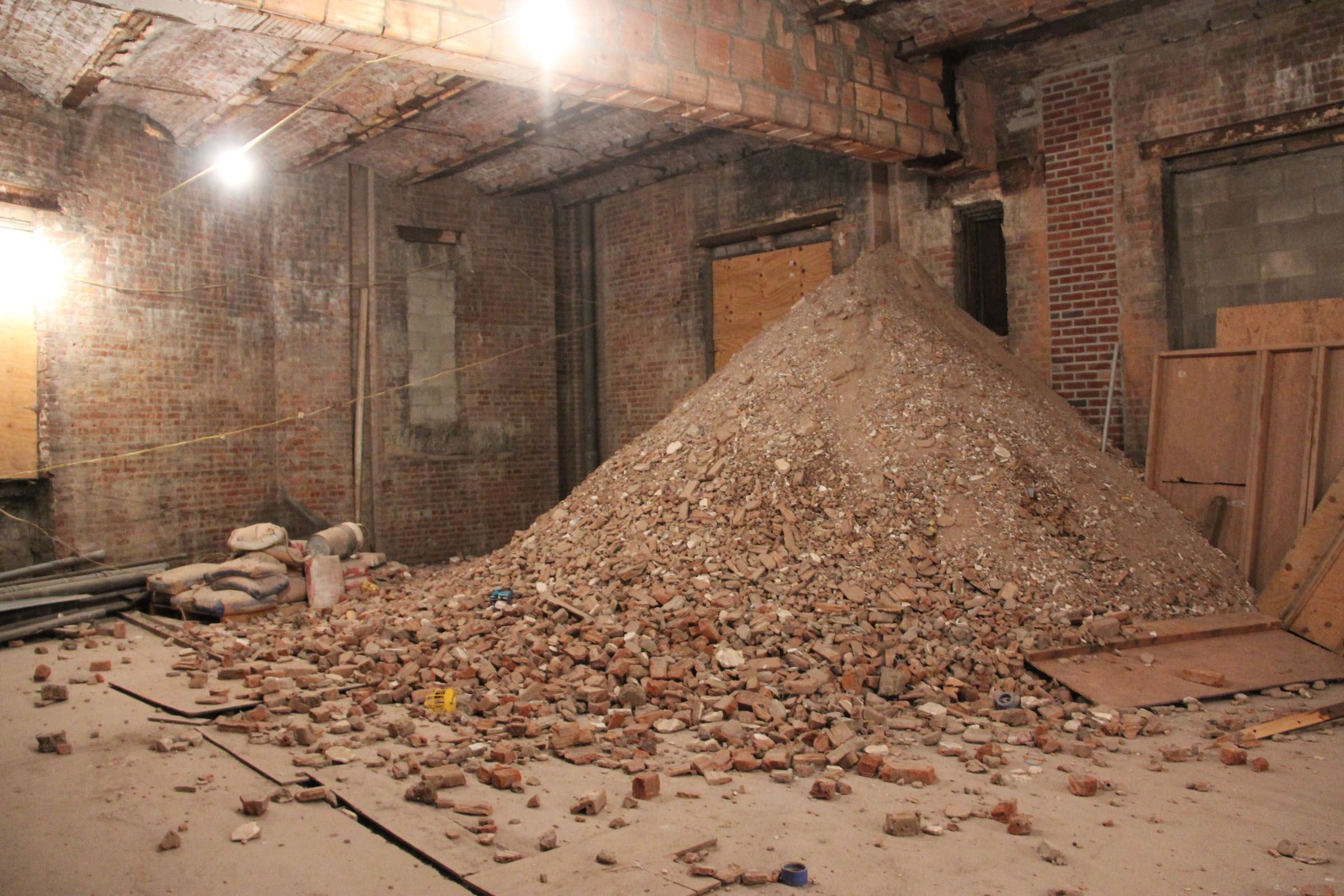 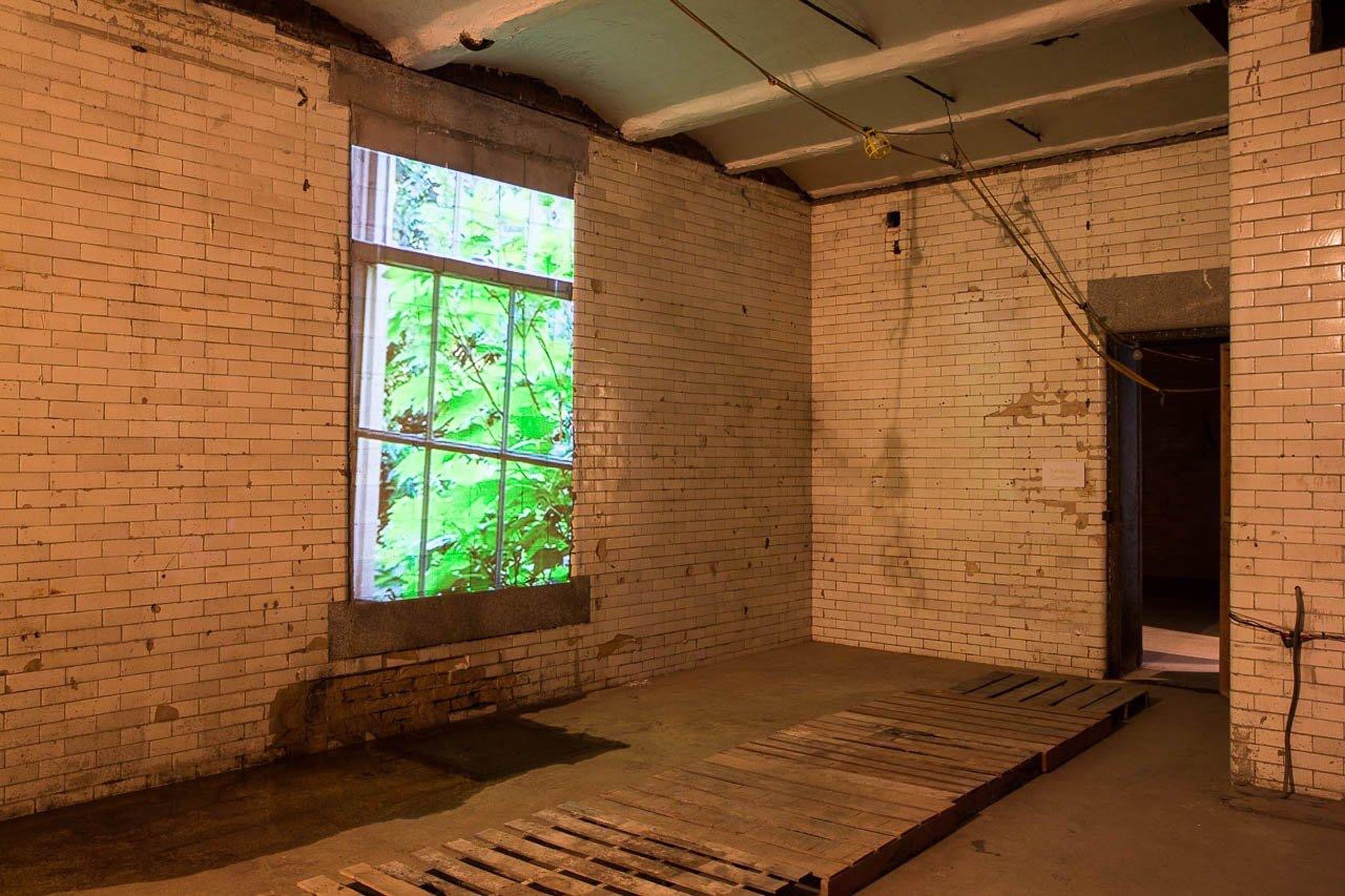 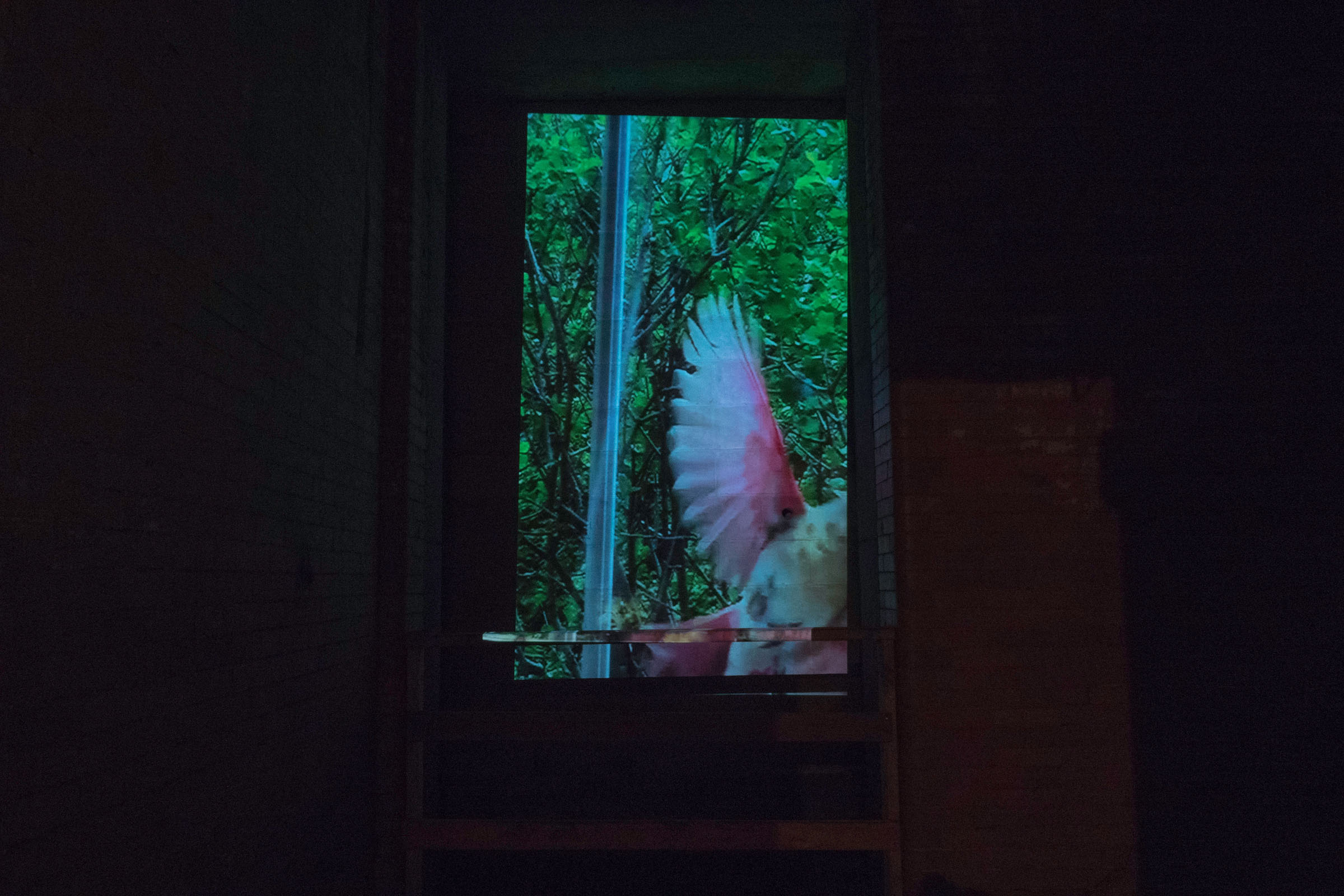 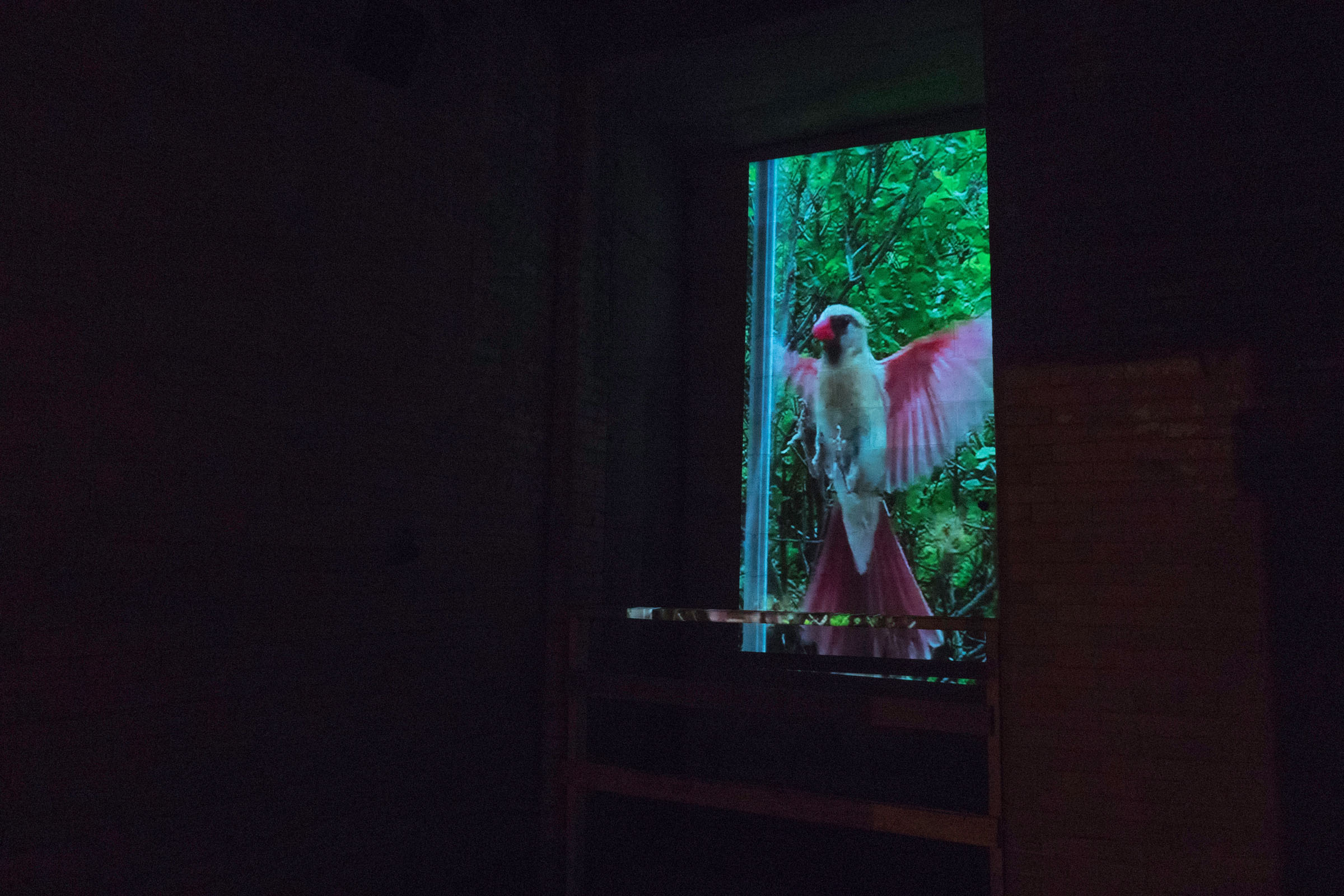 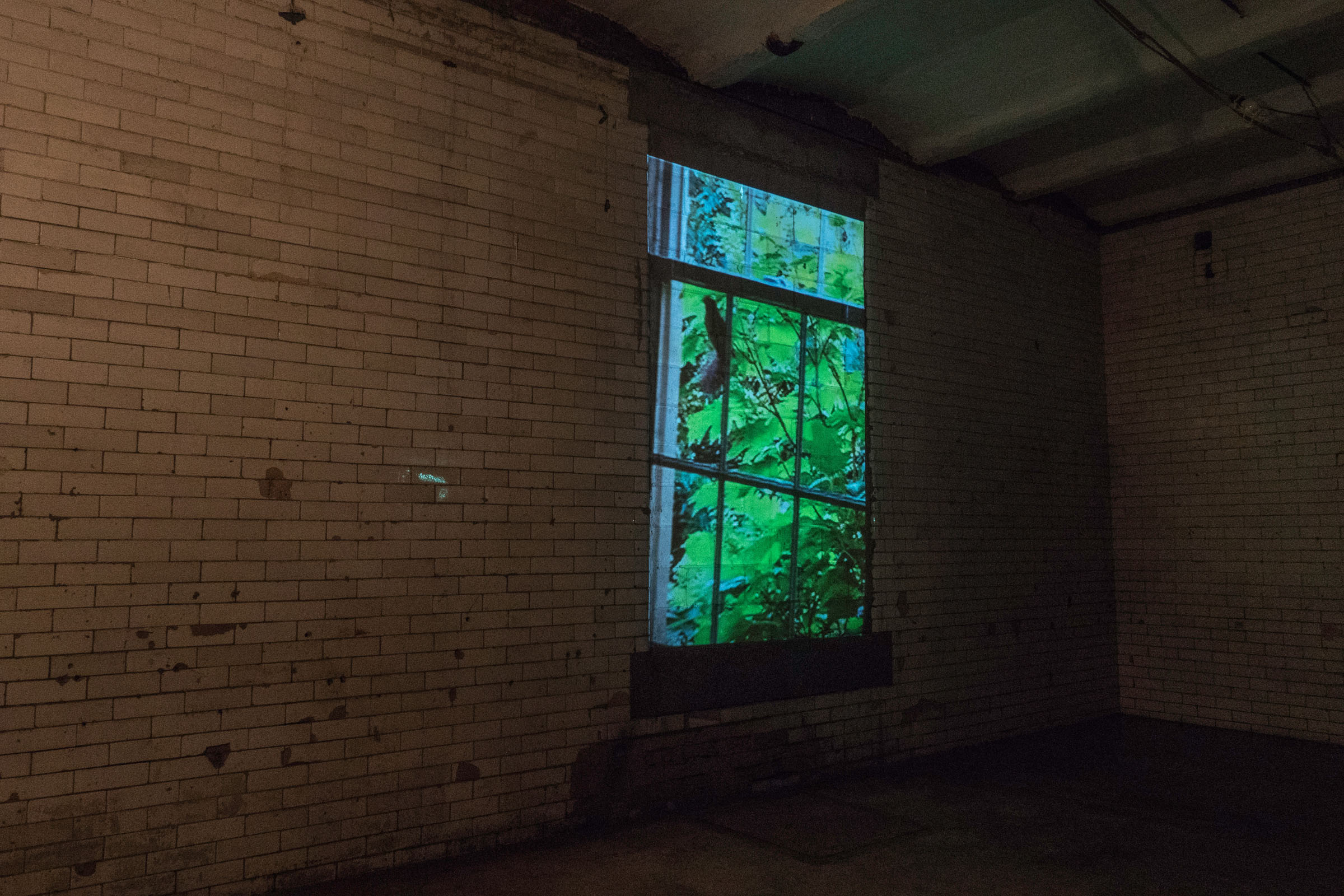 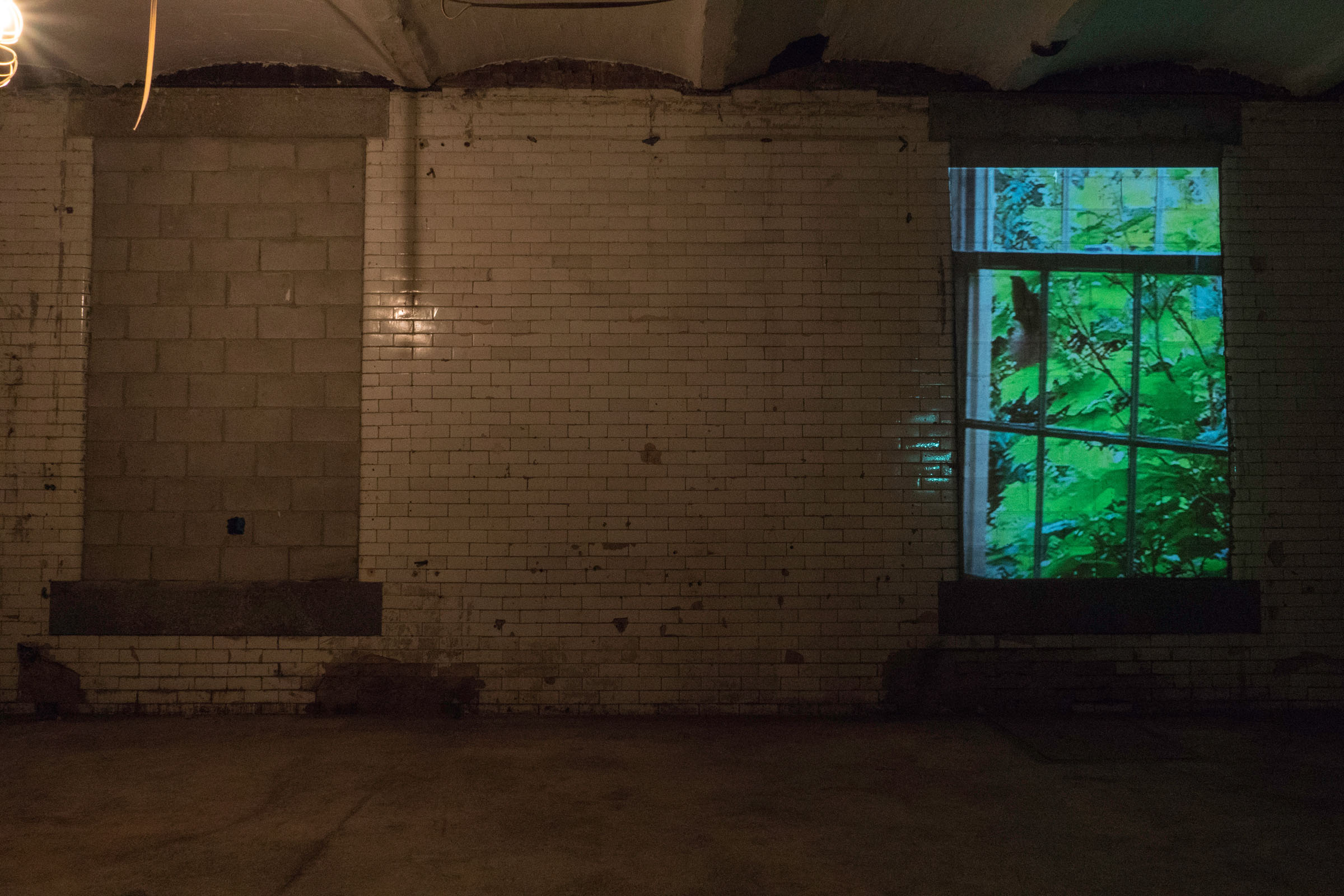 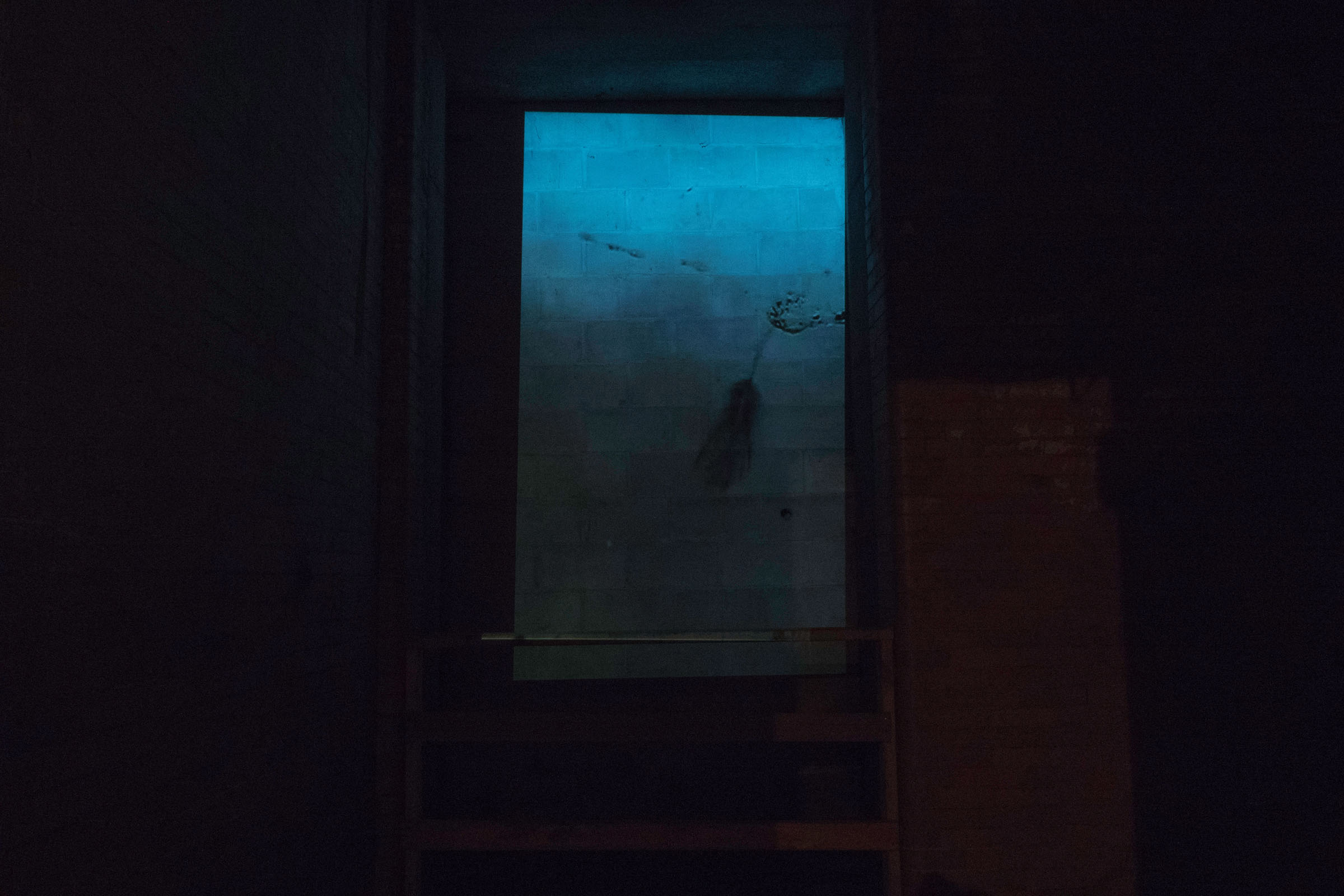 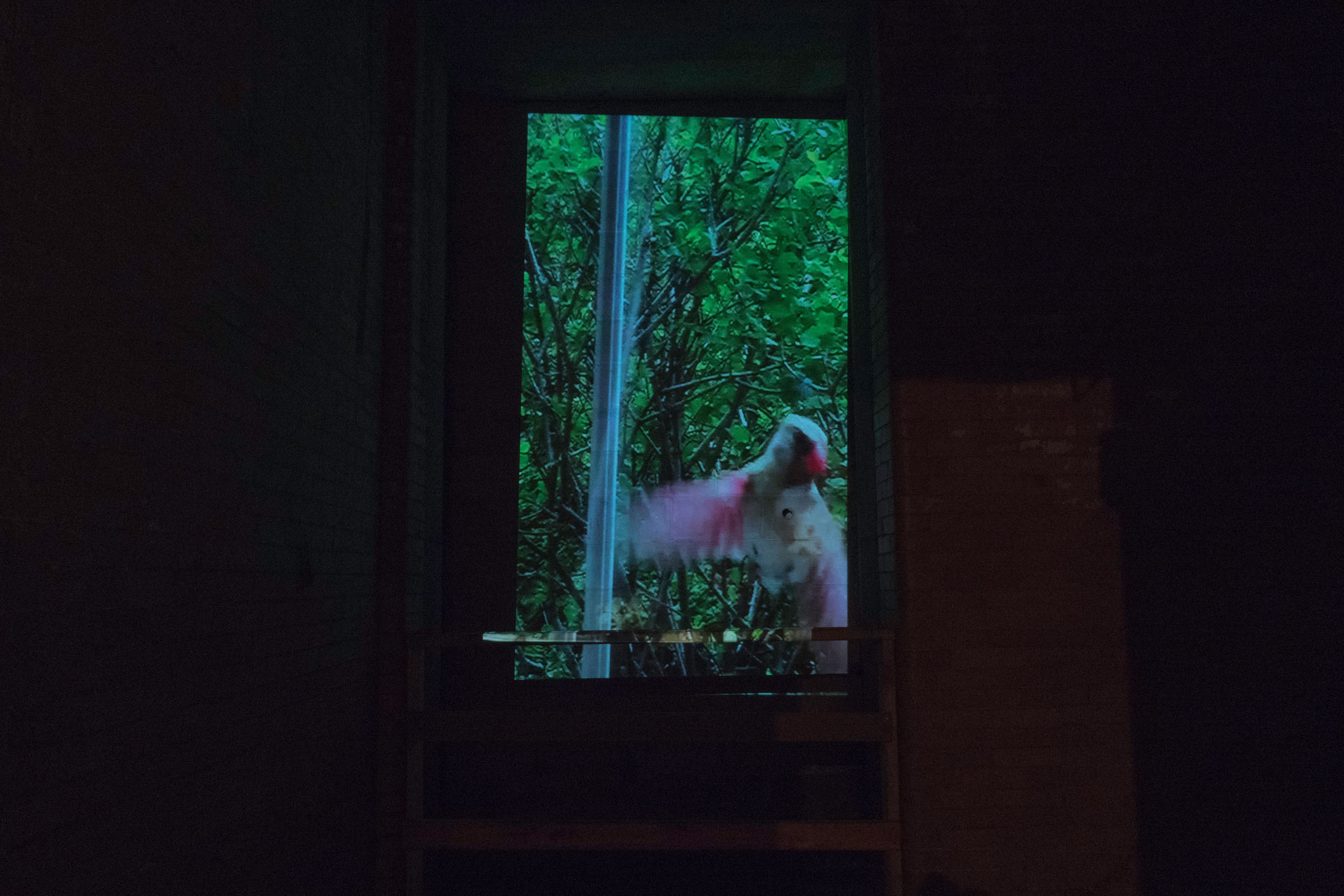 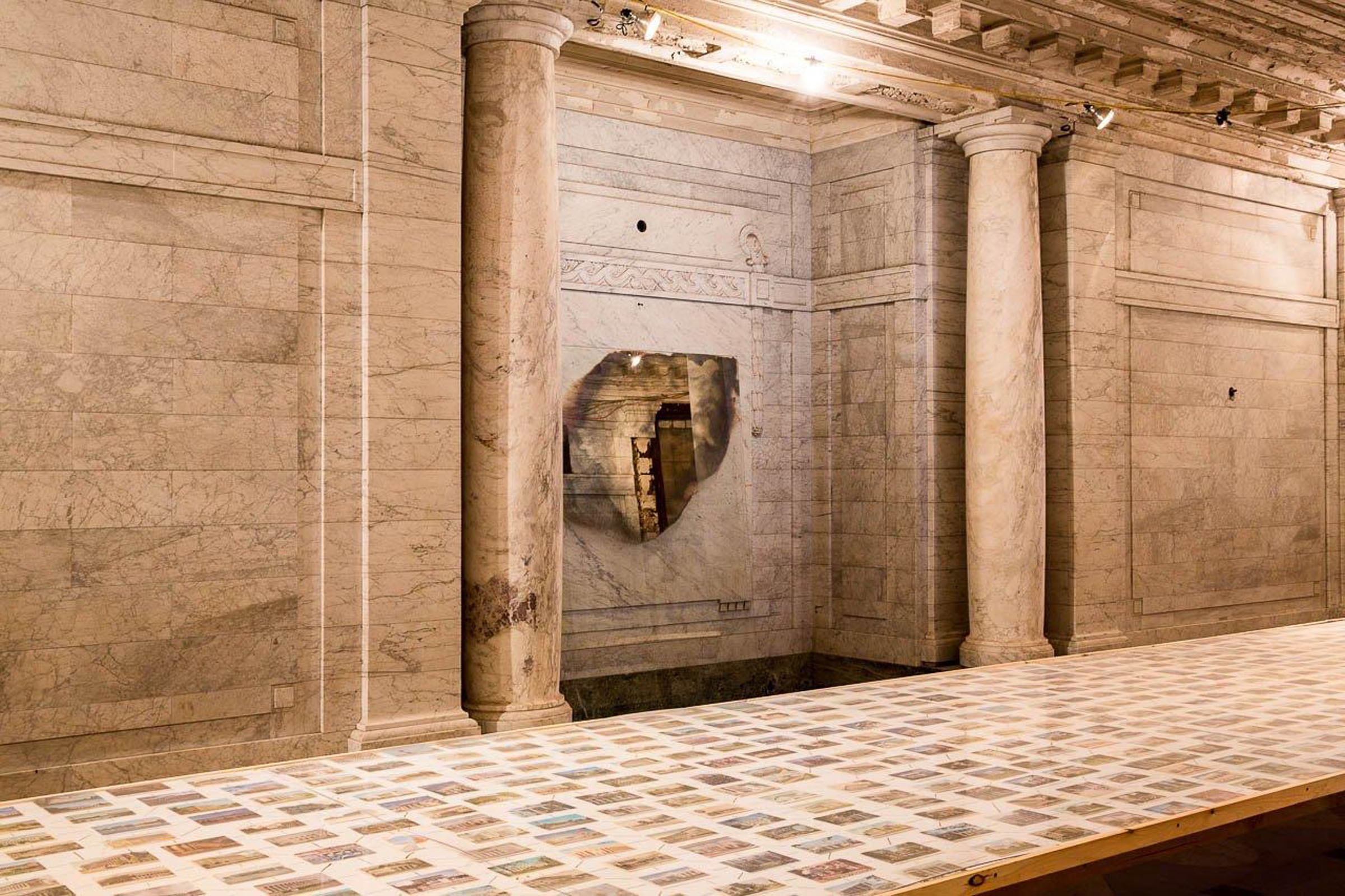 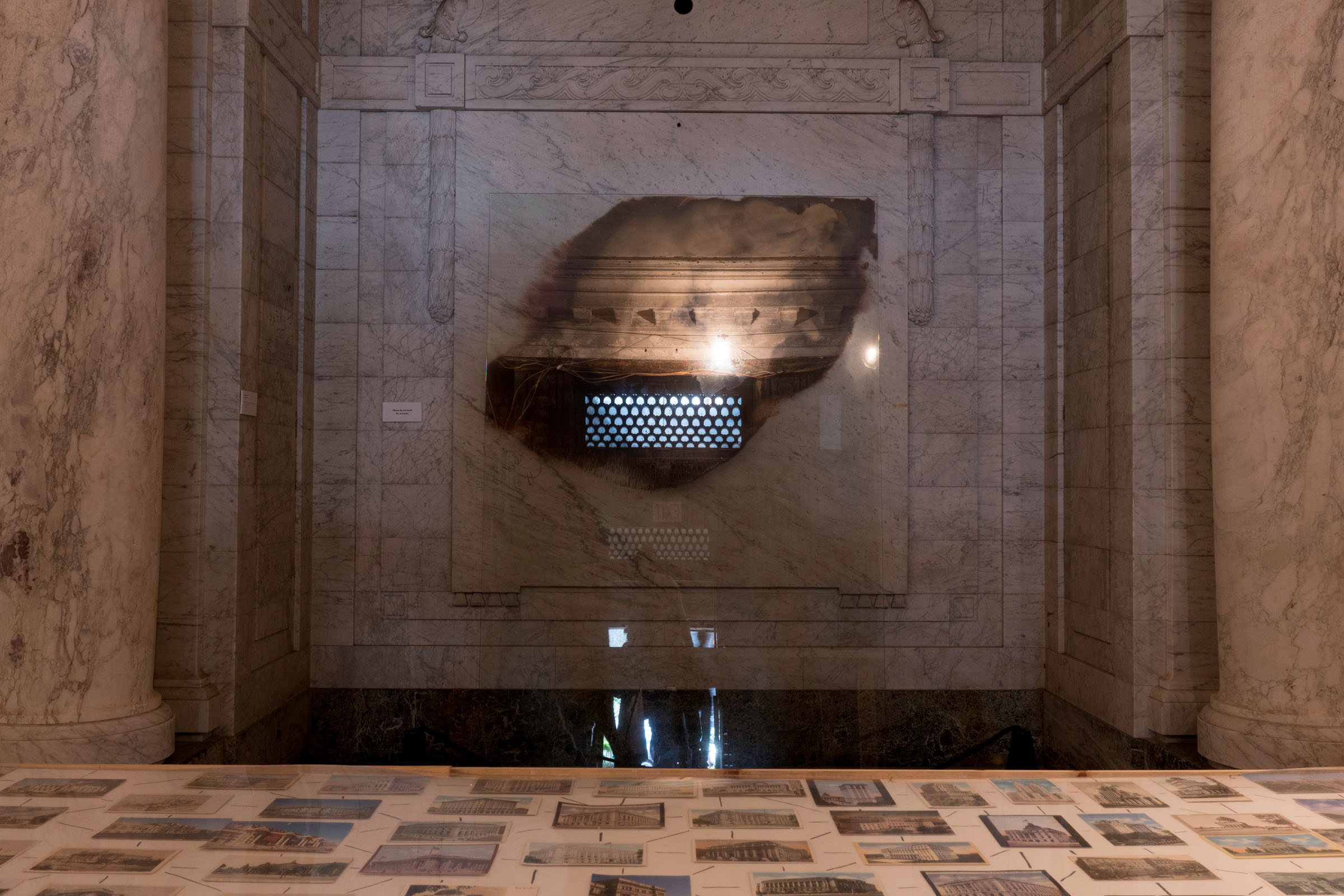 Proposal, Michelle Lopez: “When You Cut to the Present the Future Leaks Out”

Begin with the site of the Old Bronx Courthouse. Its very inception as a stolen architectural design of Oscar Bluemner, creates such disillusionment in the architect that he leaves the profession altogether to become a painter. The abandoned ruin has the air of disappointment and the building itself serves as an artist’s portrait. What is the legibility of the author in ruins and does it matter?

In one of the rooms of the courthouse is a pyramidal pile of bricks and rubble, as if impossibly dripped onto the floor. Its minimal symmetry challenges our notion of the natural in relation to urban decay. How did it get there but through human intervention onto the scene. The fact that the pile comes from stripping the concrete from the building’s steel beams, assists the idea that identity happens by laying bare the skeletal structure.

Through this idea of stripping towards a truth, comes my interest in the representation of cultural monuments as a means to identity(for example, my recent installation of flagpole as a monument to identify power).

In a circuitous path that leads back to the idea of stripping,I’ve had a long time interest in birds and their vulnerability in relation to flight, more specifically to human flying and the technological feat and metalit requires. Within the culture is the romance of travel, but also the reality of aircraft dissappearances and deaths. These occurences seem to happen in epic proportion (elephant in the room: 9/11, Singapore Airlines, Lockerbie and more); it is epic simply because of our human desire to hurtle people through the sky.

Here is the bird in smaller proportion-- possibly the inspiration for the first airplane engineers-- again a body moving through thesky.

Enter now into the equation: glass windows and when the light is situated right, the reflection of the bird materializes enough that it believes it is seeing another bird as an enemy. It unwittingly is being mirrored. I am distinguishing this moment away from the recent architectural glass curtain walls that seems to be killing the bird population (an important subtext). My interest lies in the encounter that a bird has with its reflection in a car rearview mirror, or when perched on a house windowsill to stare at its own image. The bird will attack its own self but there is also a territorial motivation. A male of this stature will protect its females and nest from other predators. What it doesn’t know is that it really is only attacking its self, again and again like a broken record.

For this project, I would like to construct a mirrored structural apparatus that humanely attract birds as they fly look at themselves with wonder and bang into the image of the self, so I may video capture their motions. I’ve been in contact with ornithologists at the Forestry department at Yale University and also with the Yale Peabody Museum of Natural History in order to discuss bird behavior and do appropriate research. Some of the behavior is simple peacock: displaying male prowess and power. What interests me in this construct in what it might reveal: the narcissus complex of protecting identity to the point of destruction. The futility of pecking at the window again and again without a cognitive sense, but of desire, strikes me as appropriate for such a structure as the Bronx courthouse.

I then would like to project these images directly in the room of the pile of stone, one bird on each wall, in order to create a surround effect, but not necessarily detectable unless under close examination. The sound of the pecking and banging of these birds will create a gentle, nagging quality of stoning.