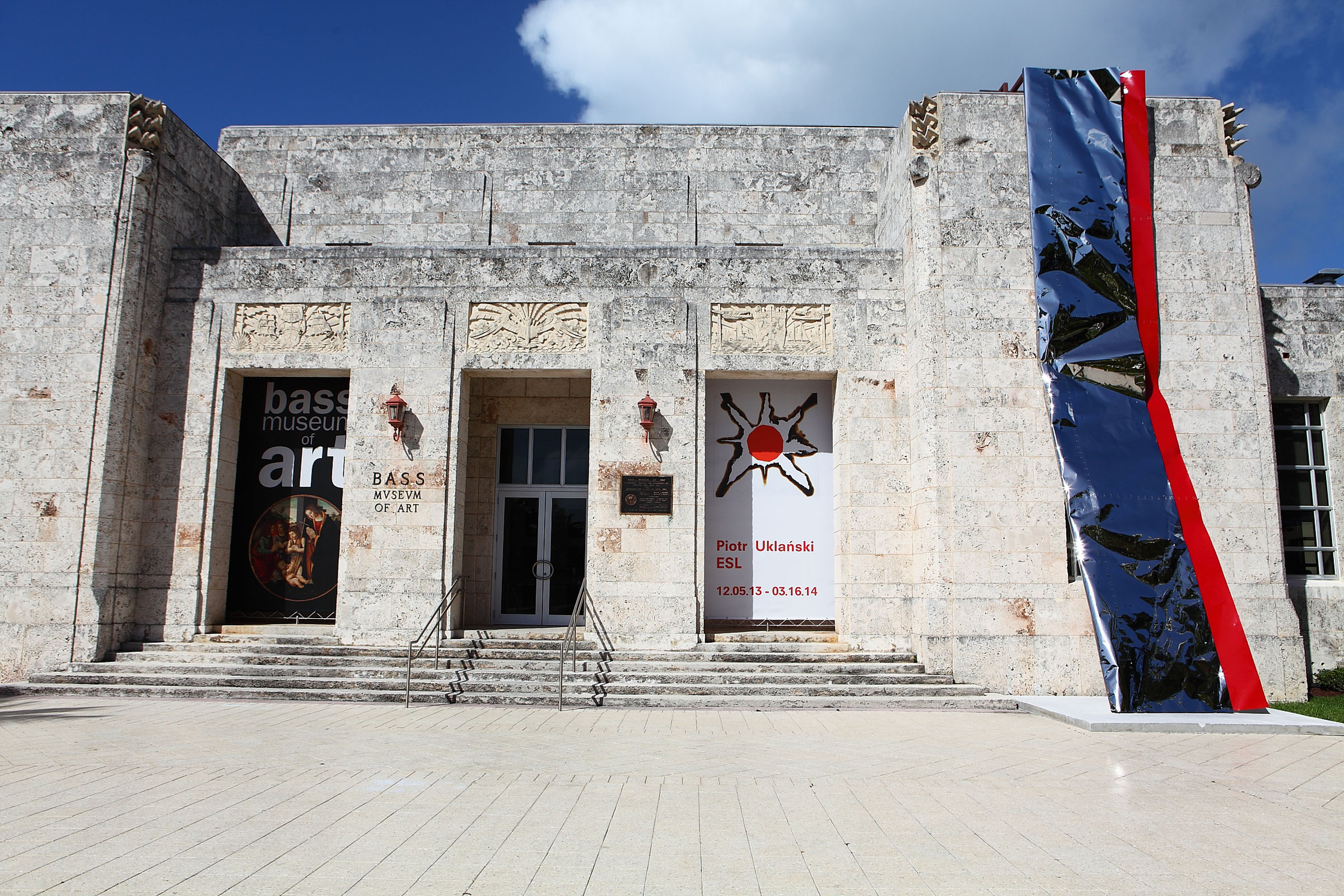 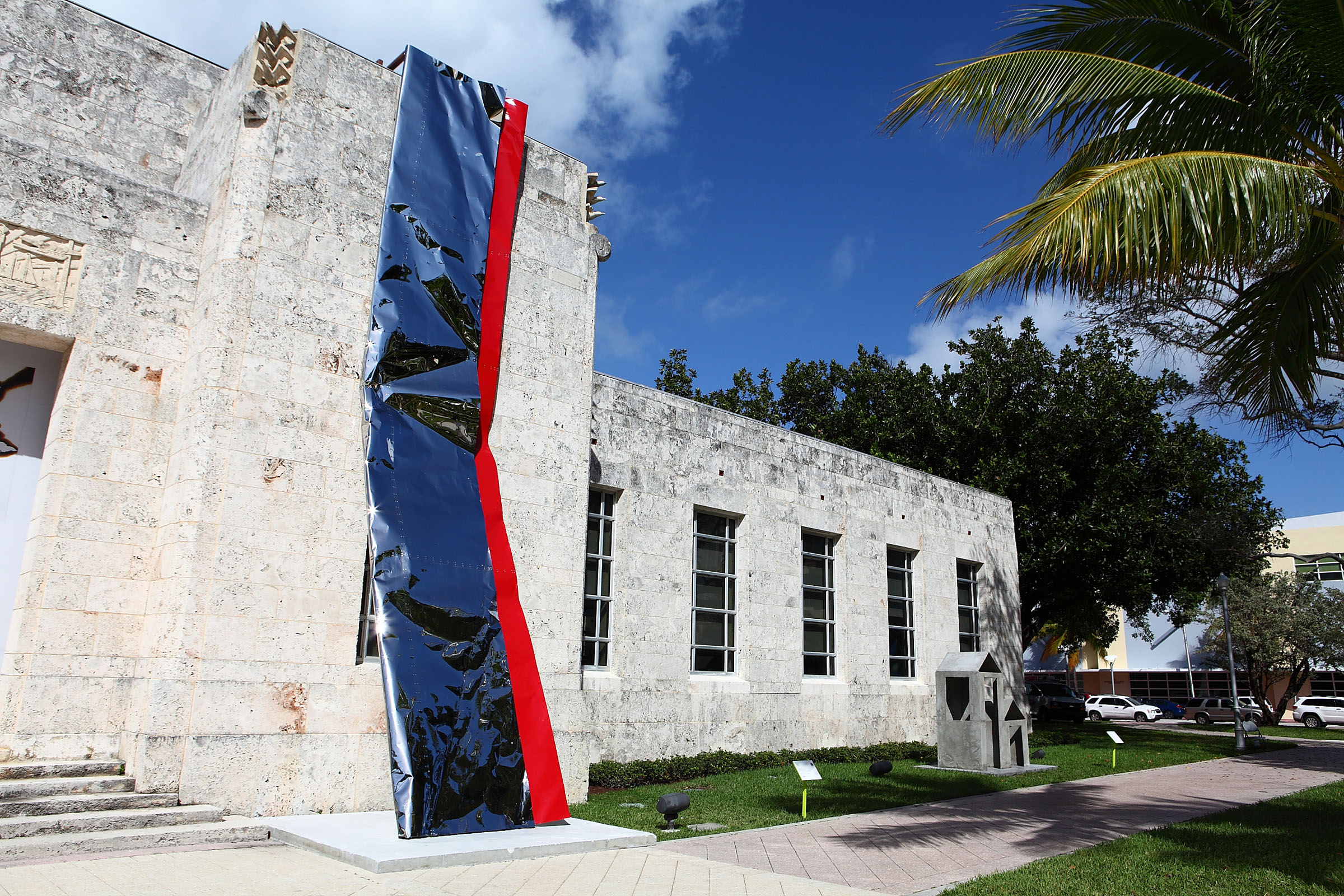 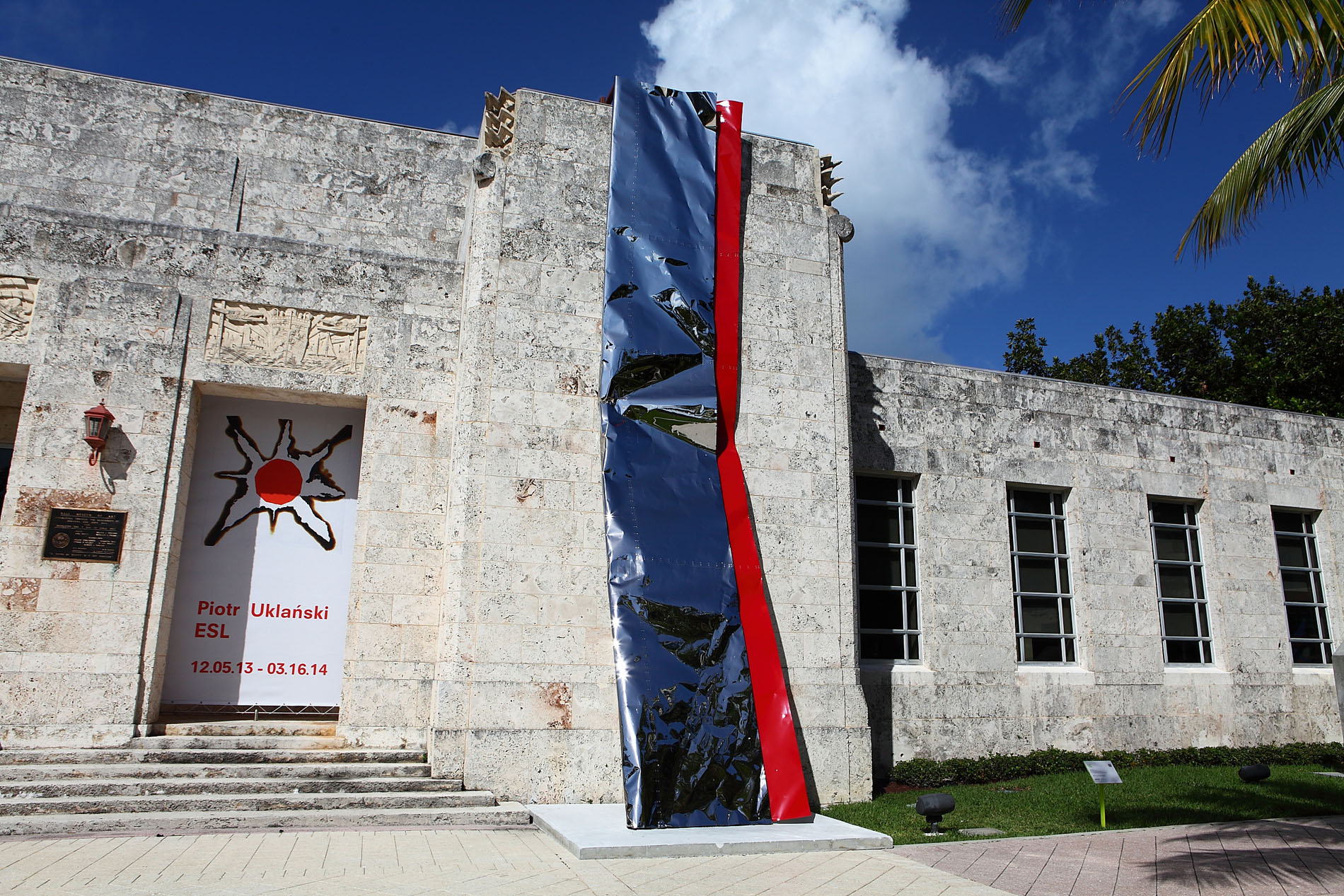 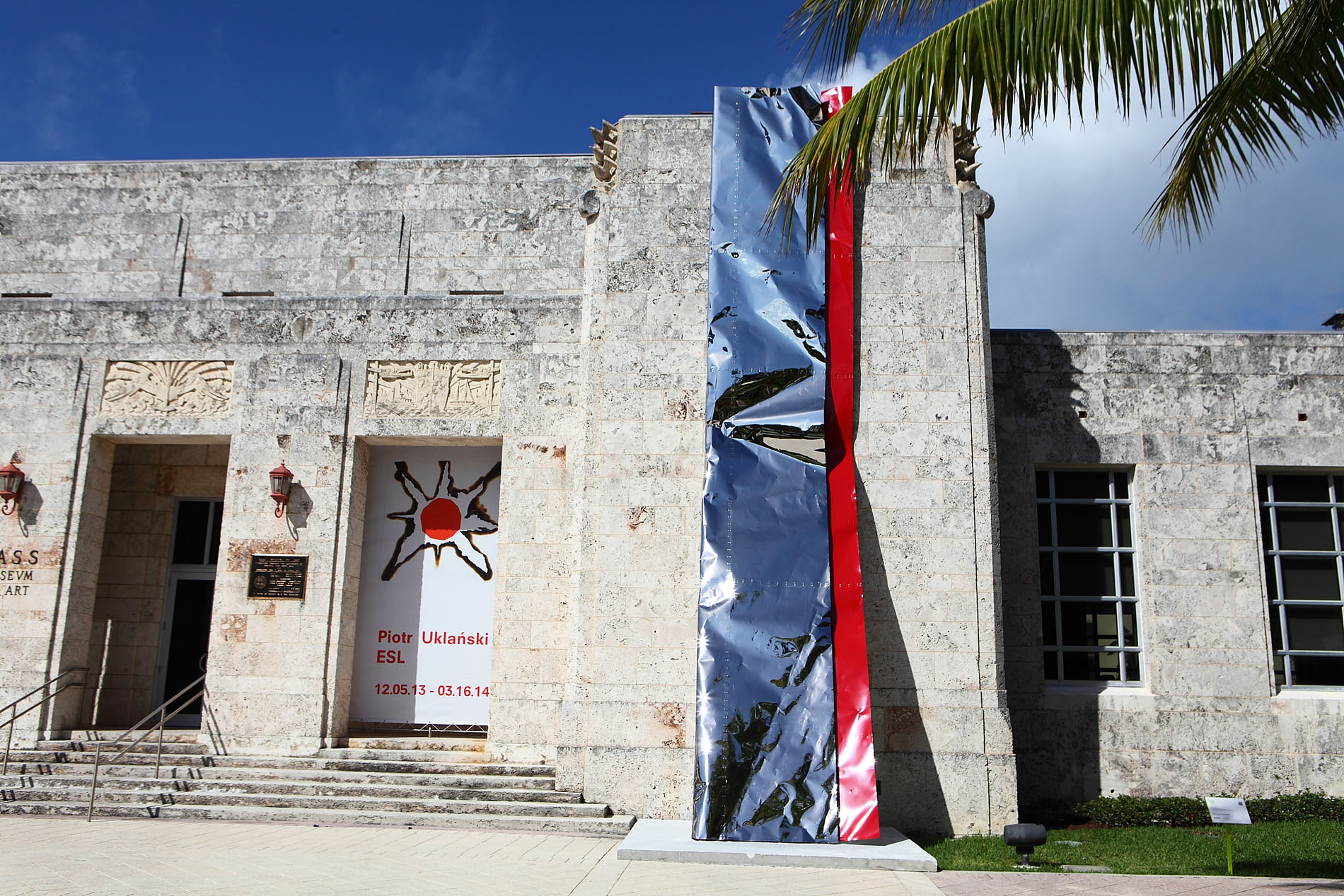 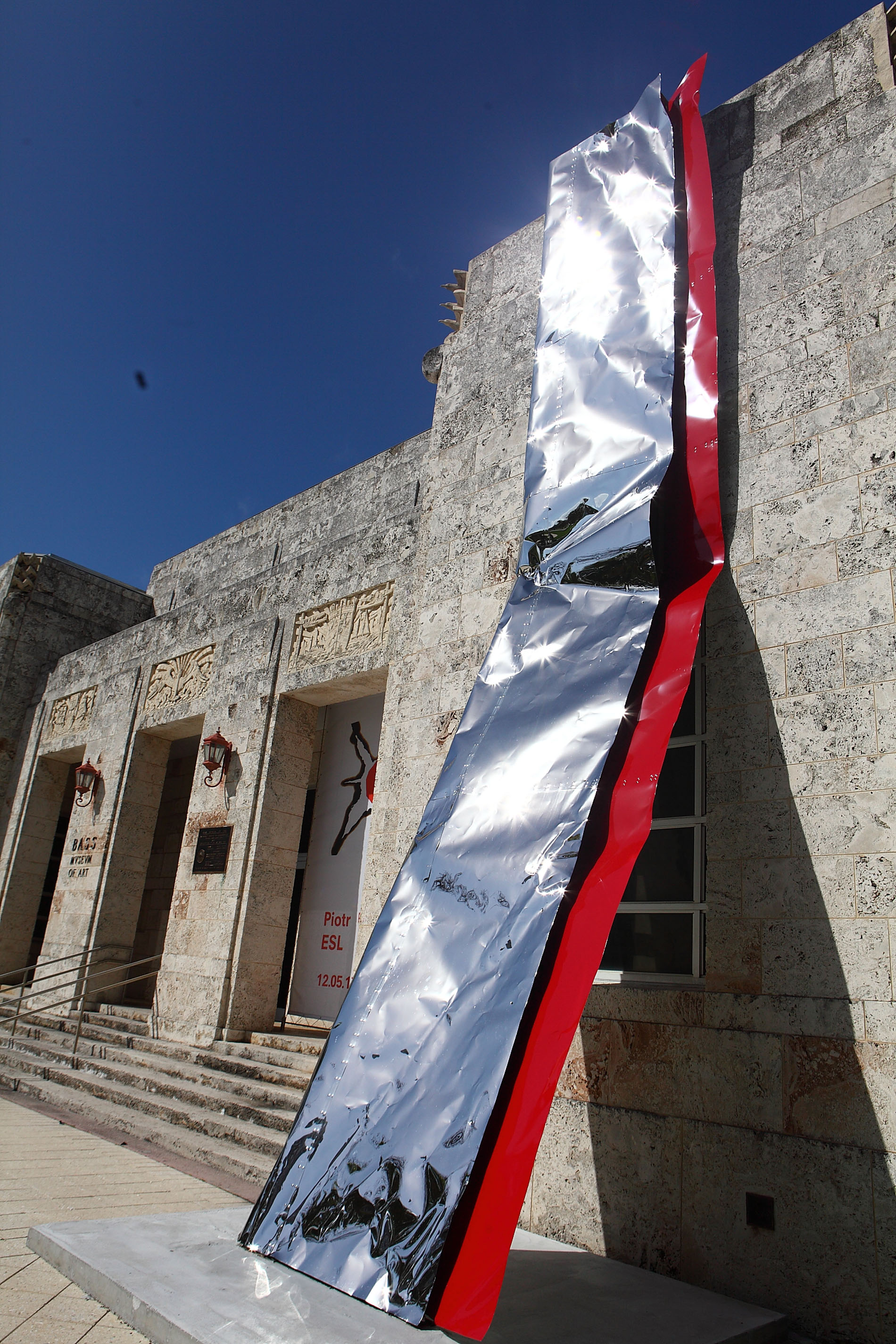 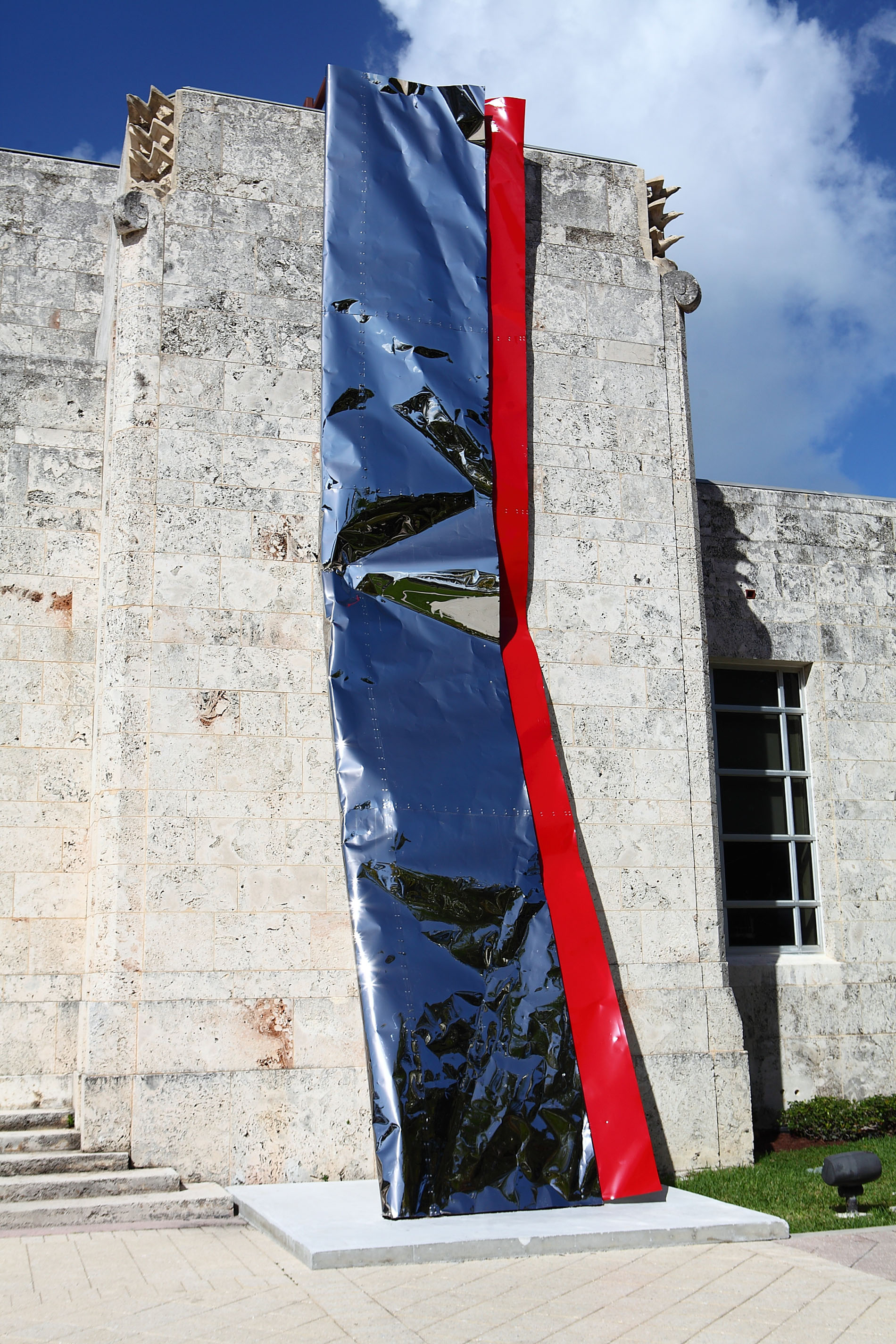 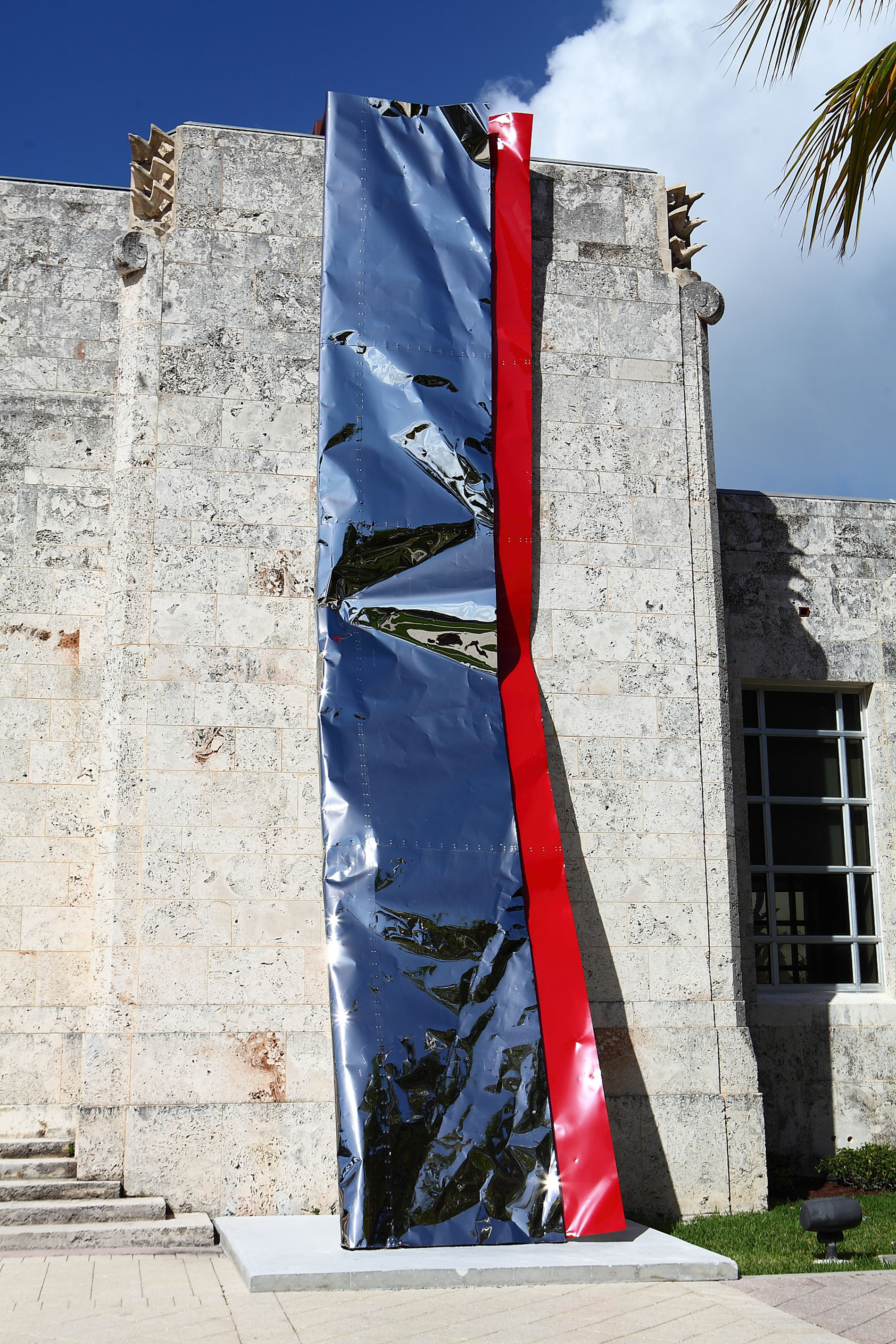 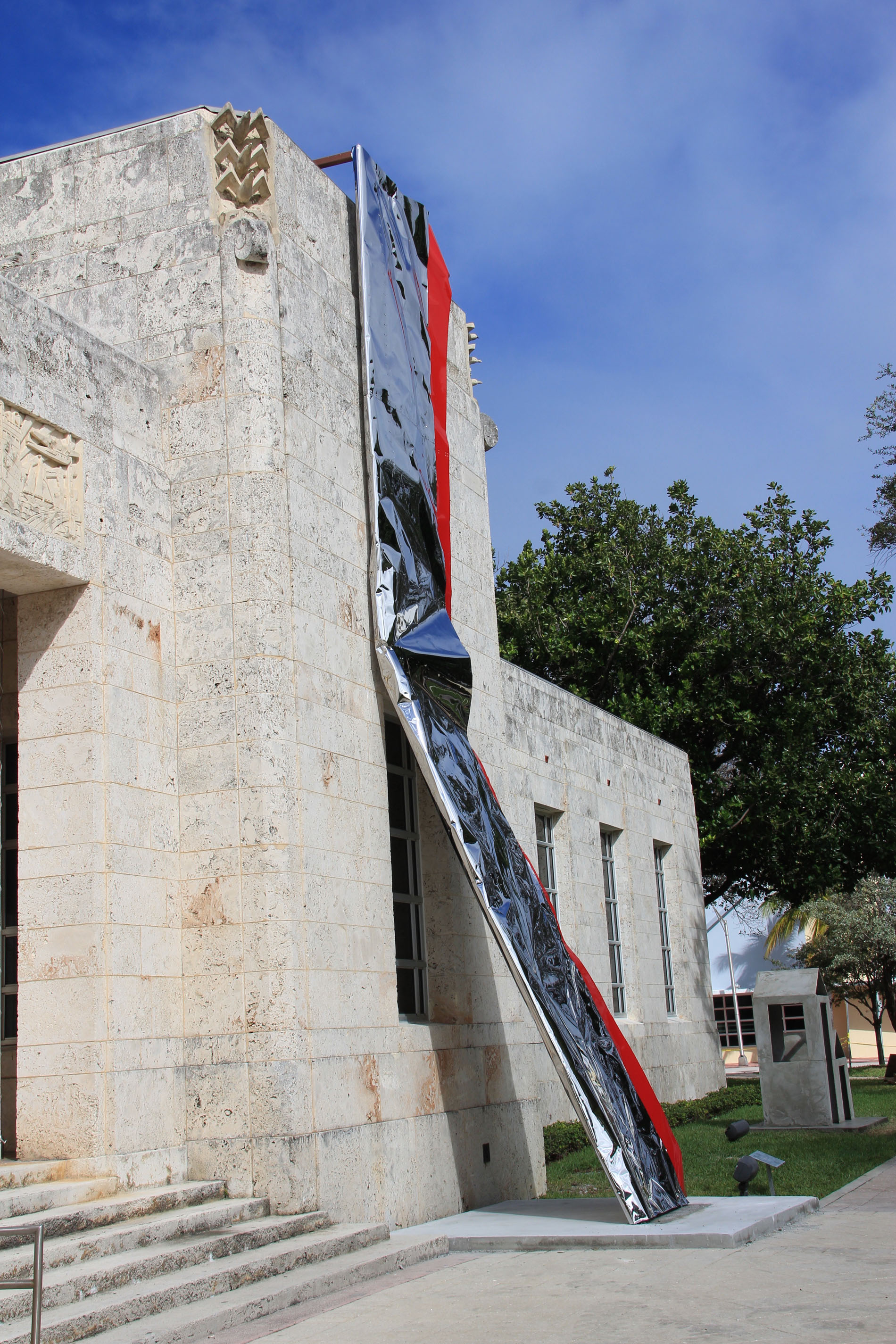 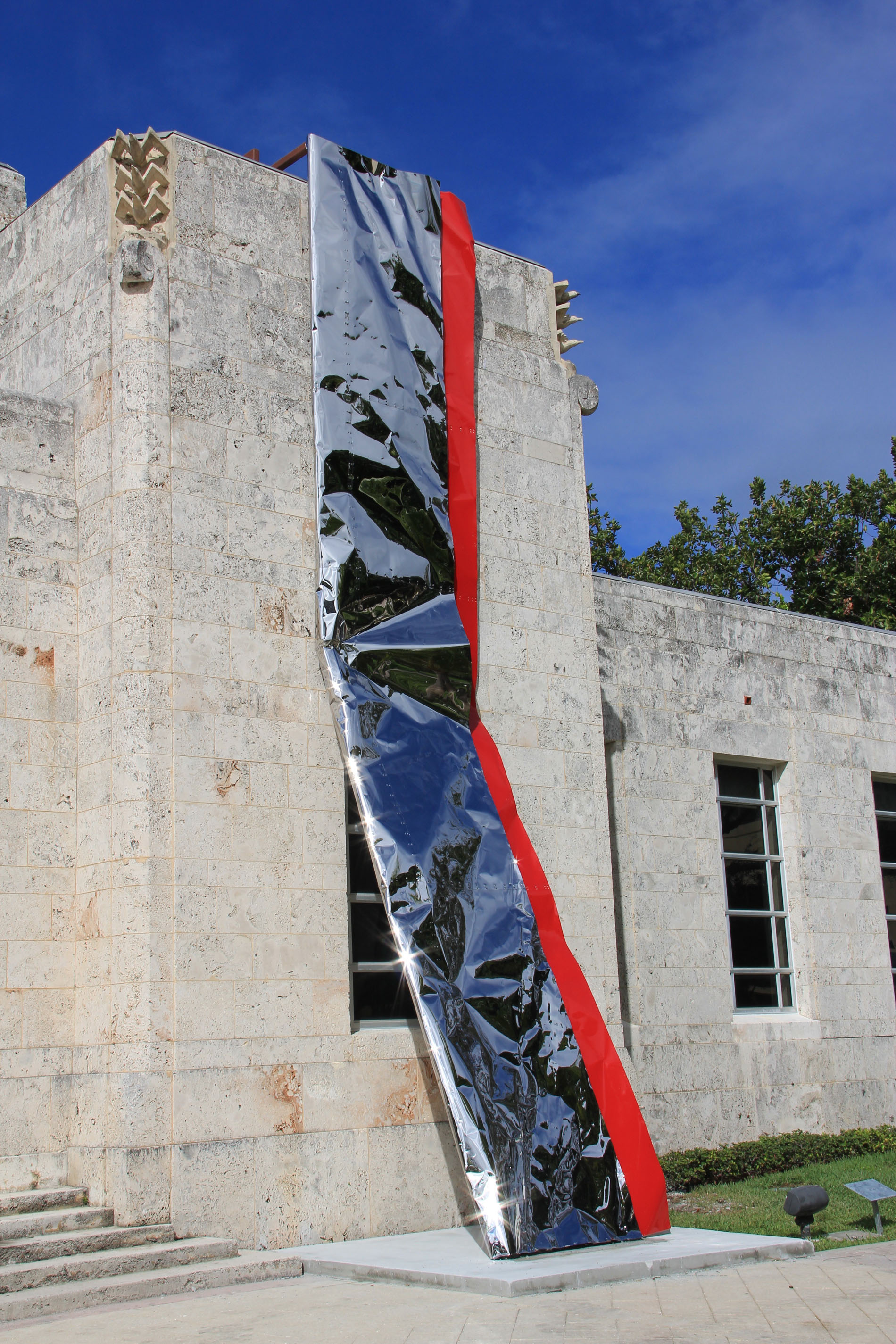 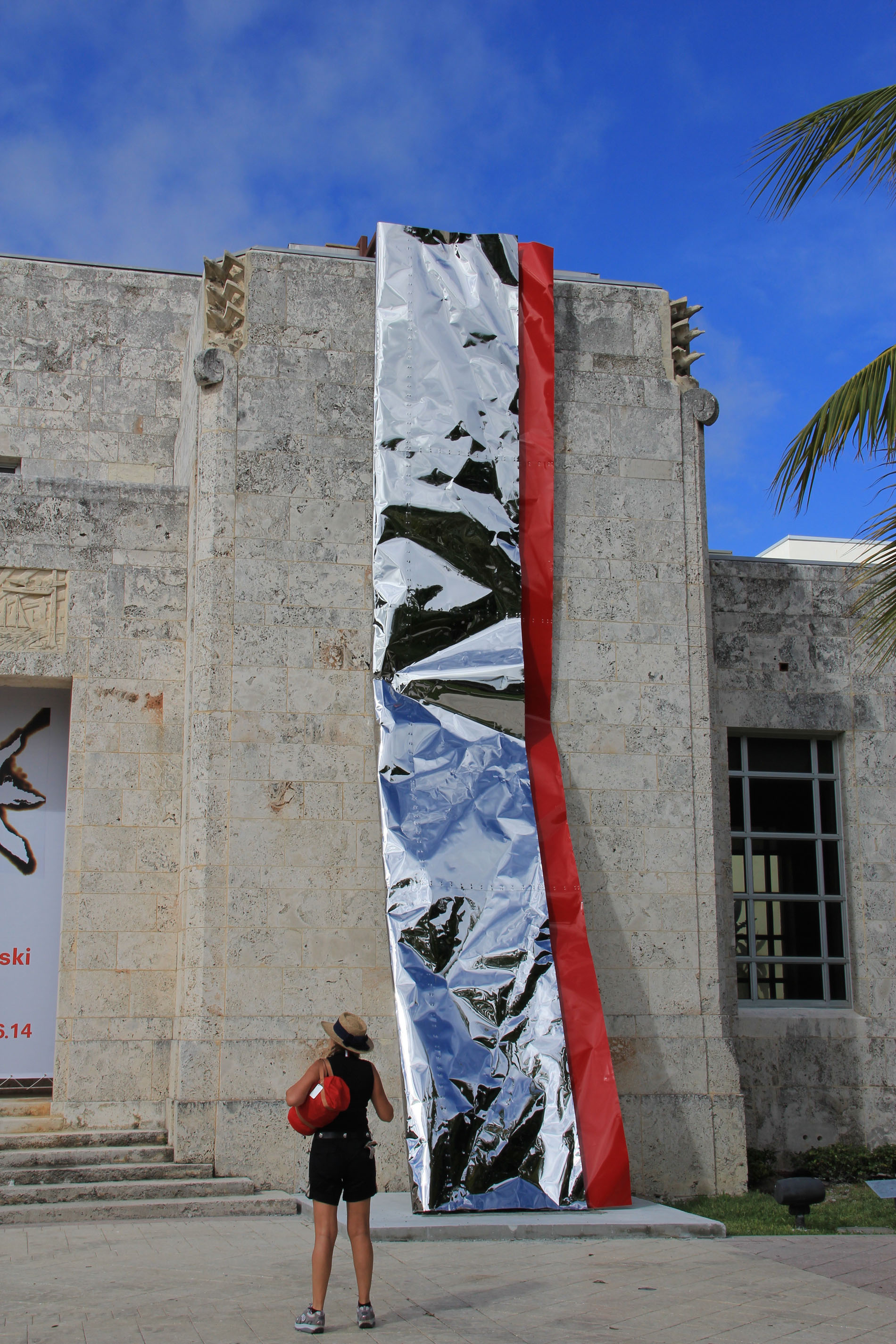 "Blue Angel II is a 40-foot sculpture leaning on the front façade of the Bass Museum of Art in Miami for the Art Public sector of Art Basel Miami and part of the Bass Museum's Temporary Contemporary. It consists of industrial sheets of polished and powder-coated steel, joined together by rivets into one long sheet - the size of an airplane wing. Installed on the front façade of the building, the shimmering mirrored collection of metal appears as if it has crashed onto the site.

Referencing crashed airplane fuselage in sheer scale and material, Blue Angel II is an allegorical memorial for our post 9/11 collective memory. The mirrored surface of the exterior implicates both the viewer and site through its reflective distortions. Michelle Lopez creates allegorical inversions of familiar cultural icons in order to circumscribe truths about our current societal landscape.

‘Michelle’s work engages a certain tradition of minimalism. But it also brings it to a very personal perspective. Her work expresses both a formal elegance, but there is a violence to it as well, but that violence where she is manipulating and pulling and pushing the material itself ultimately leads to a very poetic - a very beautiful play of the machine made and the hand touched.’"

"Michelle Lopez unveiled her first public artwork, a forty-foot-tall sculpture entitled Blue Angel II, affixed to the facade of the Bass Museum of Art, for the Art Public sector of 2013 Art Basel Miami. A towering work, fabricated from industrial sheets of mirrored stainless and powder-coated steel, the interior painted fire red, it was fastened together by rivets spanning the length of an airplane wing. Lopez bent and crushed this colossal steel sheet on-site, using only her own body, and then secured it to the Museum’s entrance upright, as if it had just slammed into the building. This multi-story behemoth reflected the hard light of the tropical sun and the pitch black of the dark night, absorbing all around it, a monument to our admiration and anxiety for expansive aerodynamic ingenuity.

The practice of sculptor Michelle Lopez explores the contested yet generative place where Minimalism and Feminism converge, diverge, and ultimately reunite. The languages she employs—material, form, and space—seek to 'corrupt minimalism,' by making 'macho sculpture feminine.' 1 Her interest lies in exploring the fragility of pop culture icons, notably 'boys’ toys' like skateboards, cars, and action figures, to 'express states of the body, such as suspension, lightness, rest, and crashing,' by bending, folding and manipulating materials to make them 'wilt,' 'melt,'' crease,' and 'crush.' 2 Lopez often submits the objects of these fetishized cultures, with their smooth lines, soft curves, and polished finishes, to violent acts and “allegorical inversions” 3 in order to unravel latent meaning and .'..create ambiguity... by exploring androgyny.' 4 In doing so, Lopez looks to (re)cover, (de)code, and (re)produce the methodologies of (un)making sculpture in order to find a language that looks beyond Minimalism and Feminism by collapsing, expanding, and ultimately releasing it from itself. "