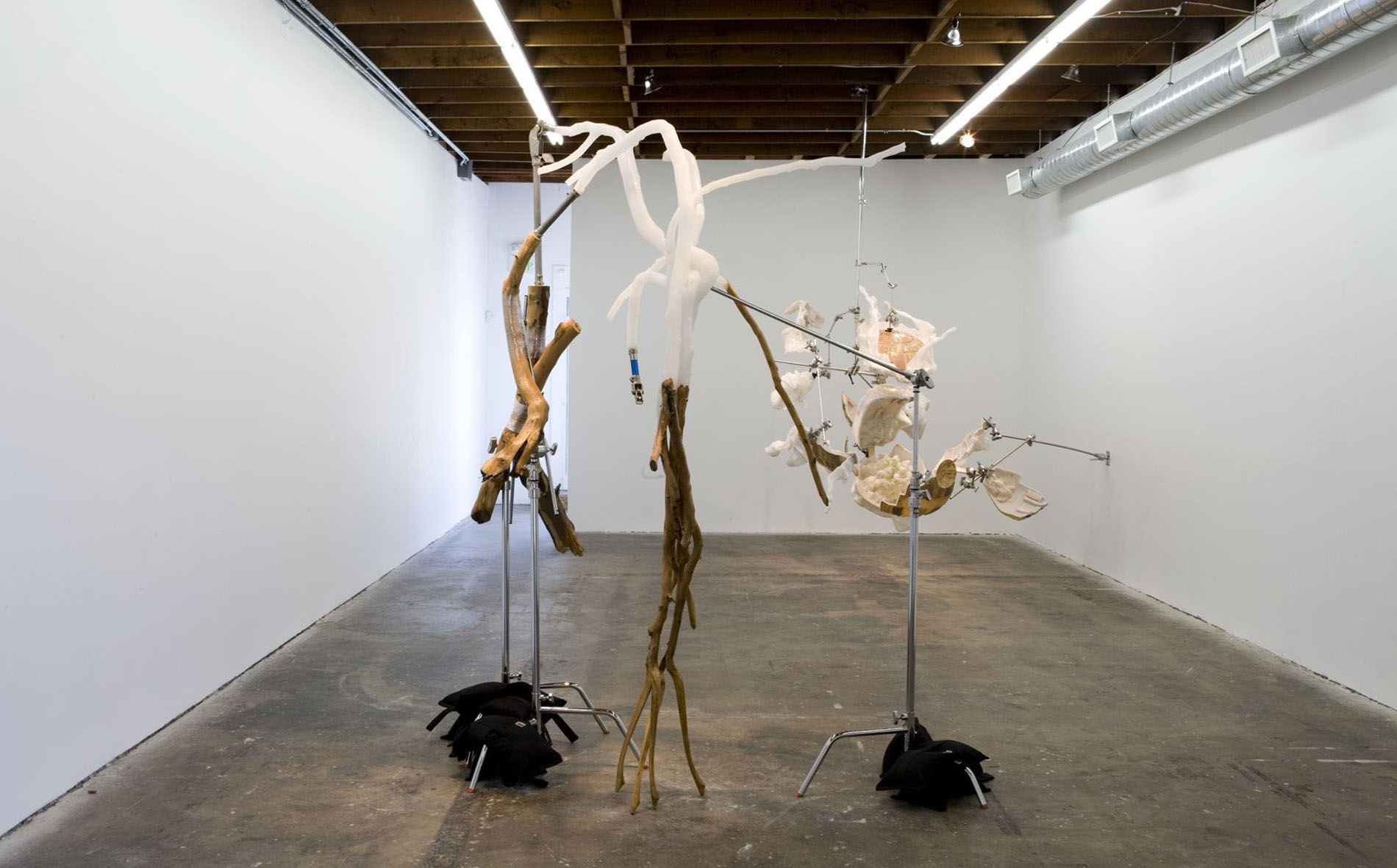 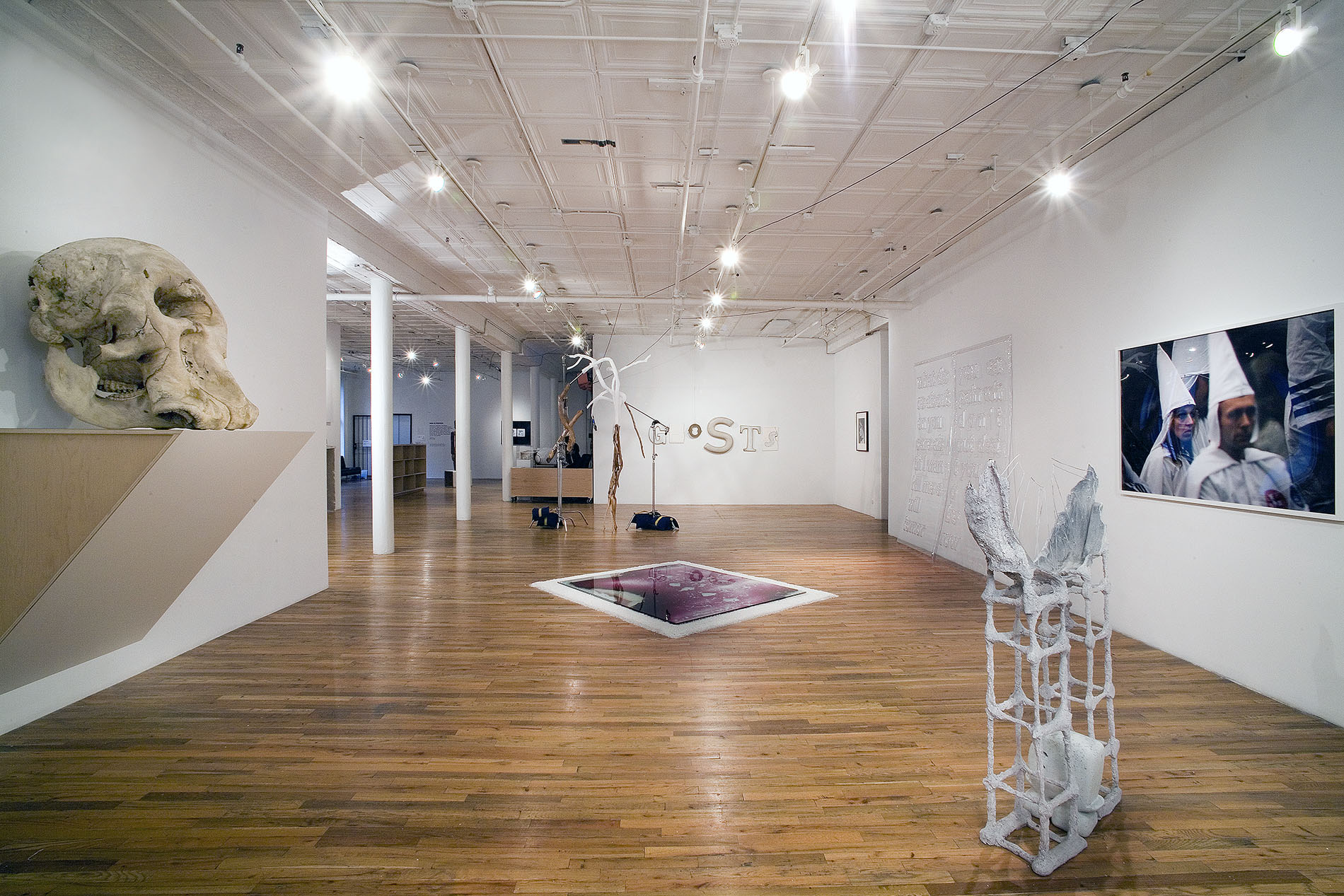 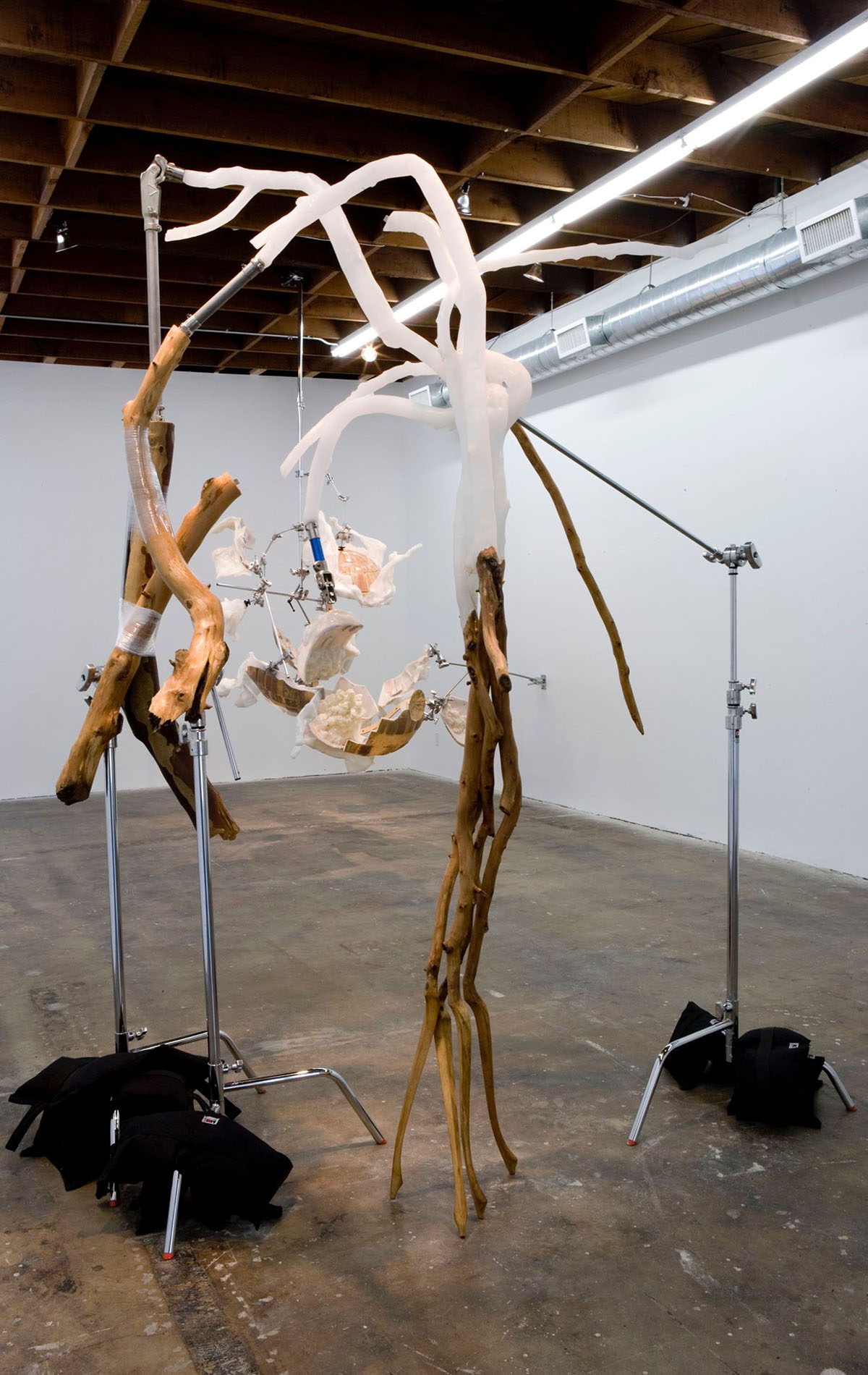 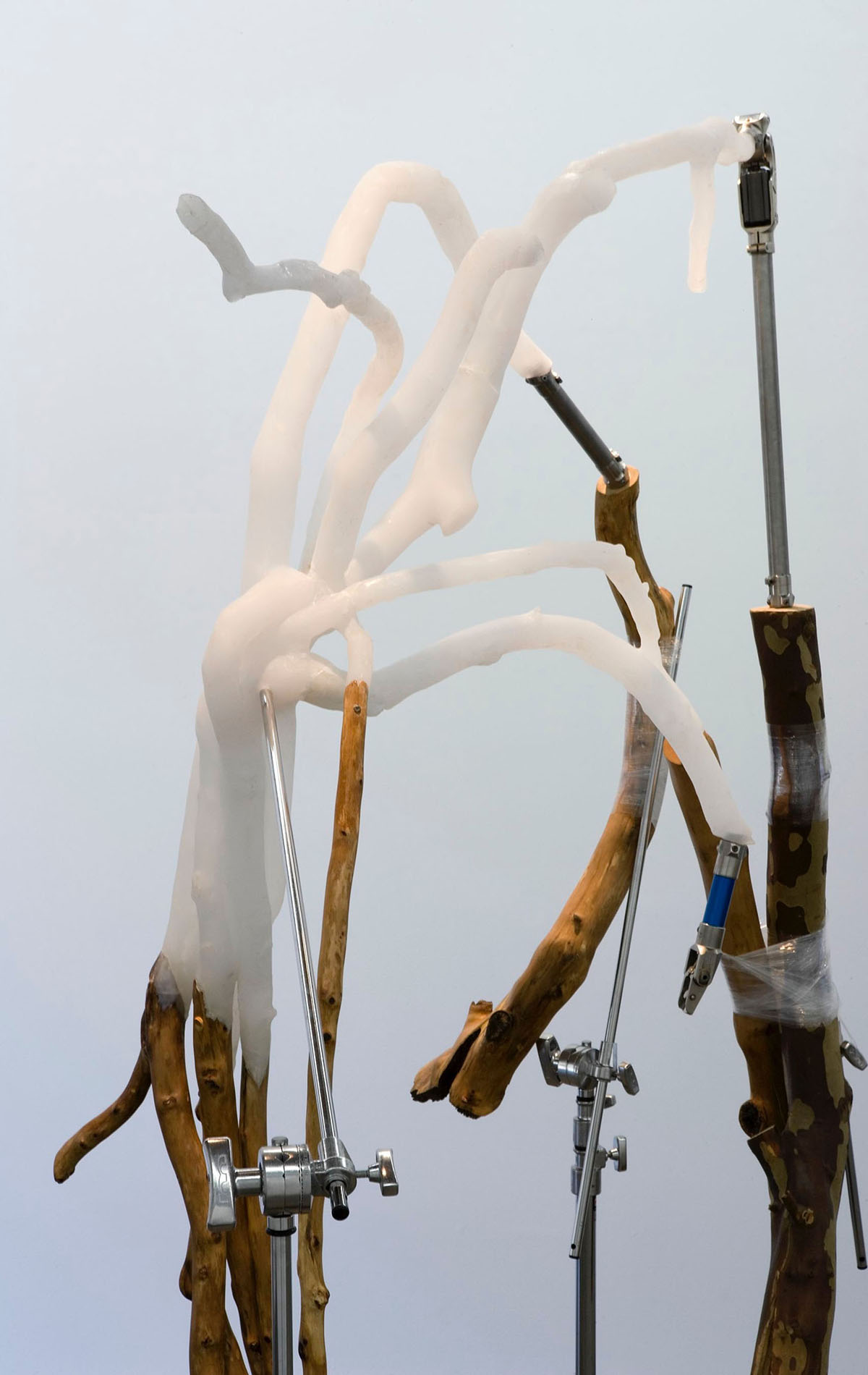 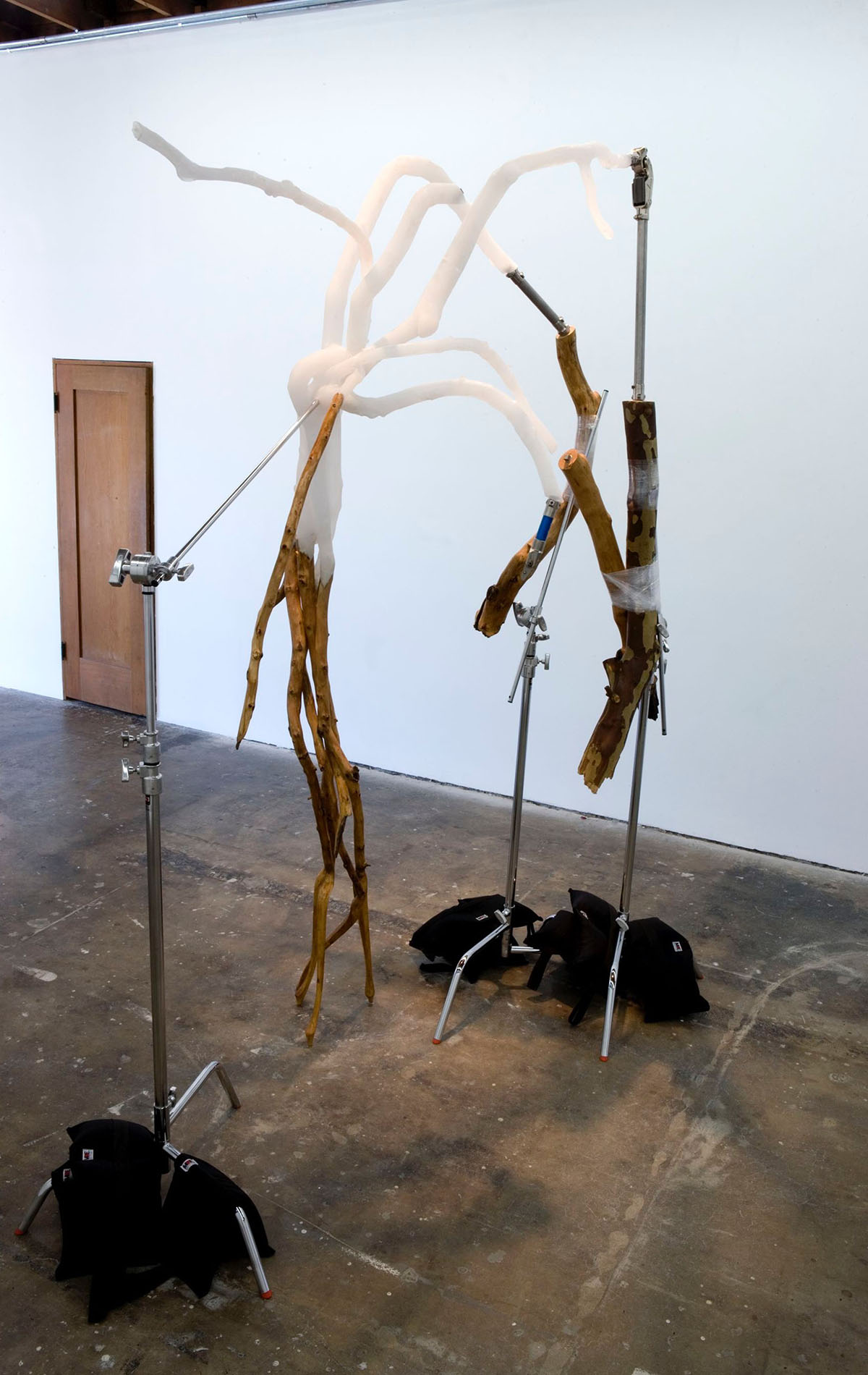 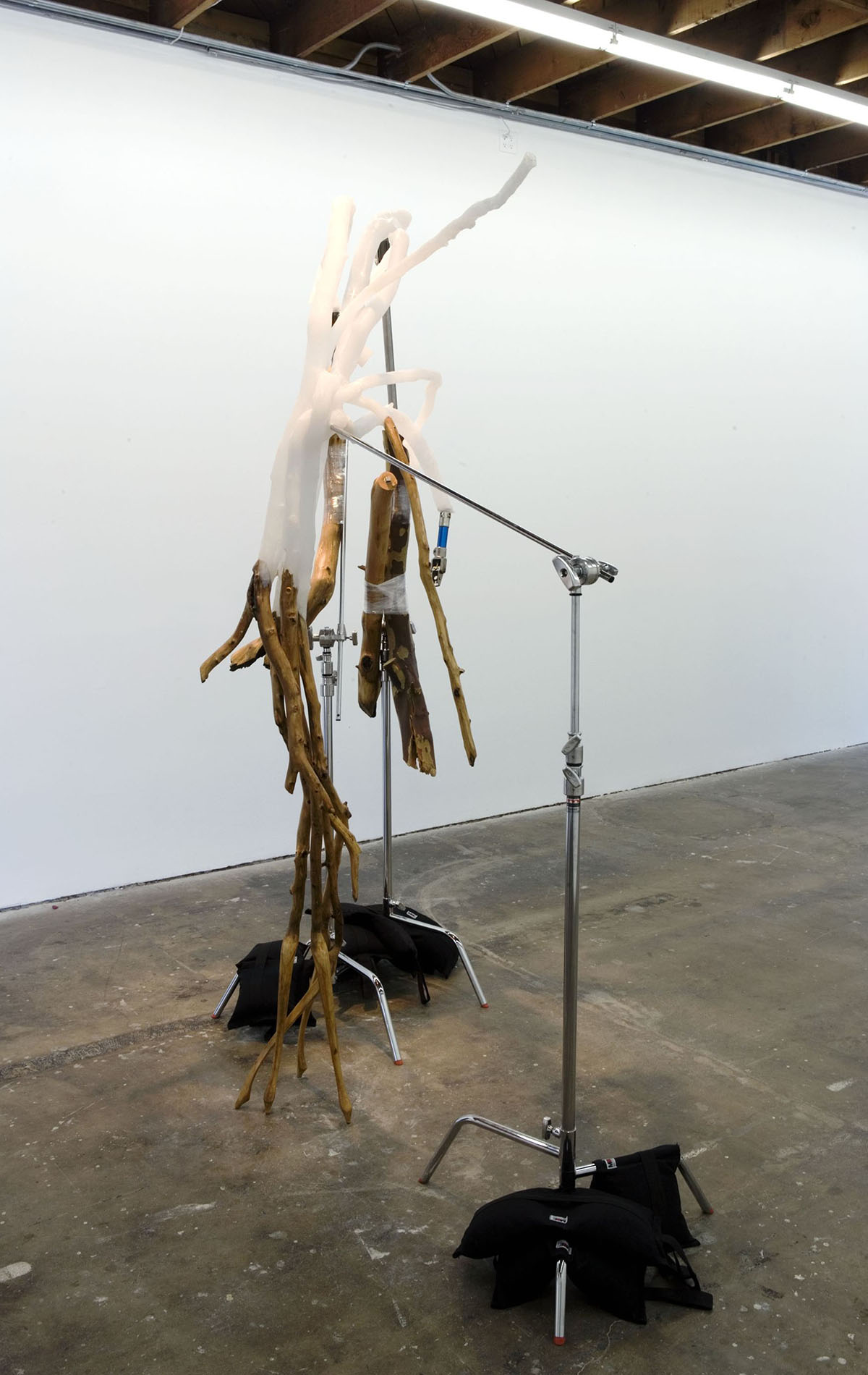 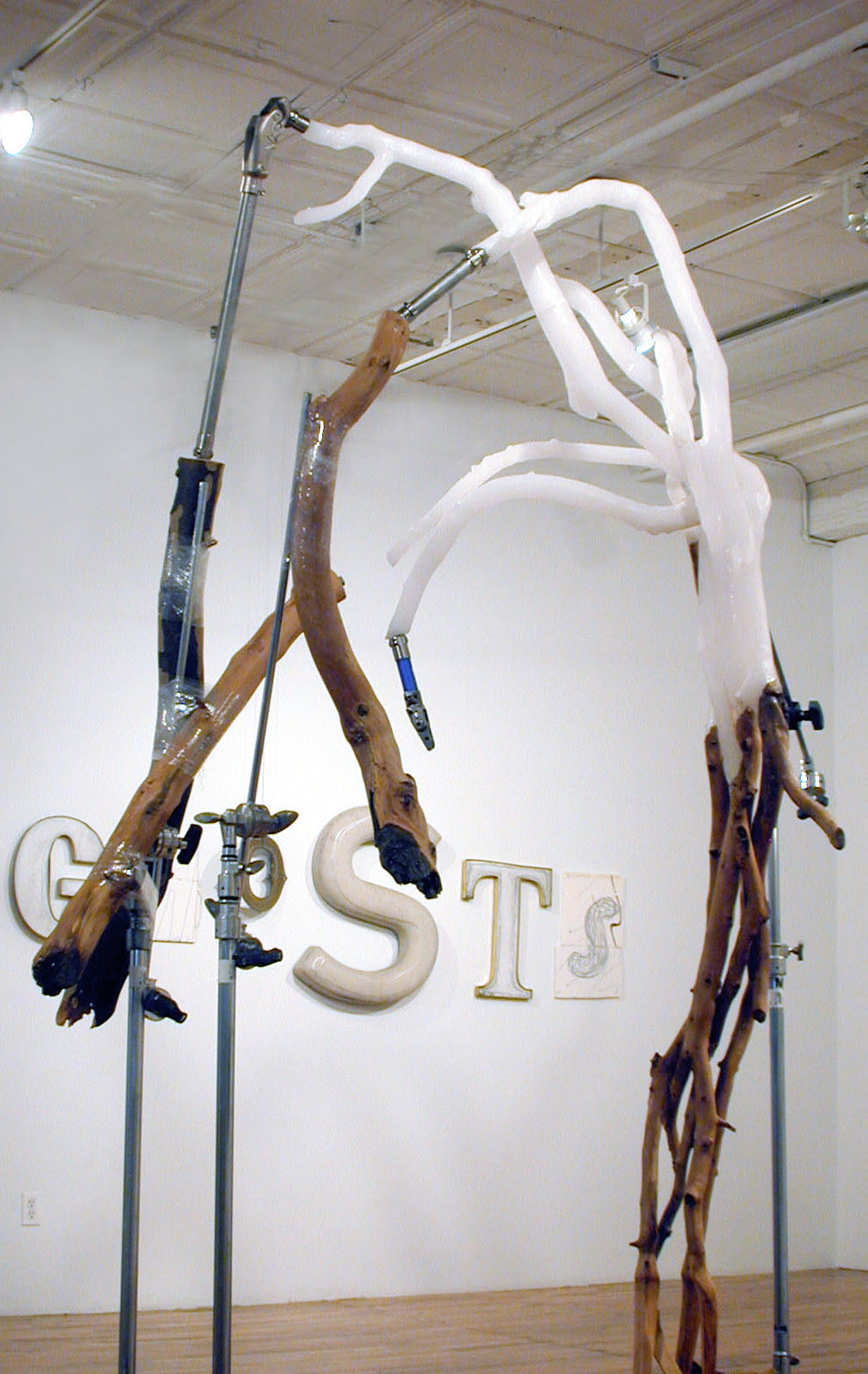 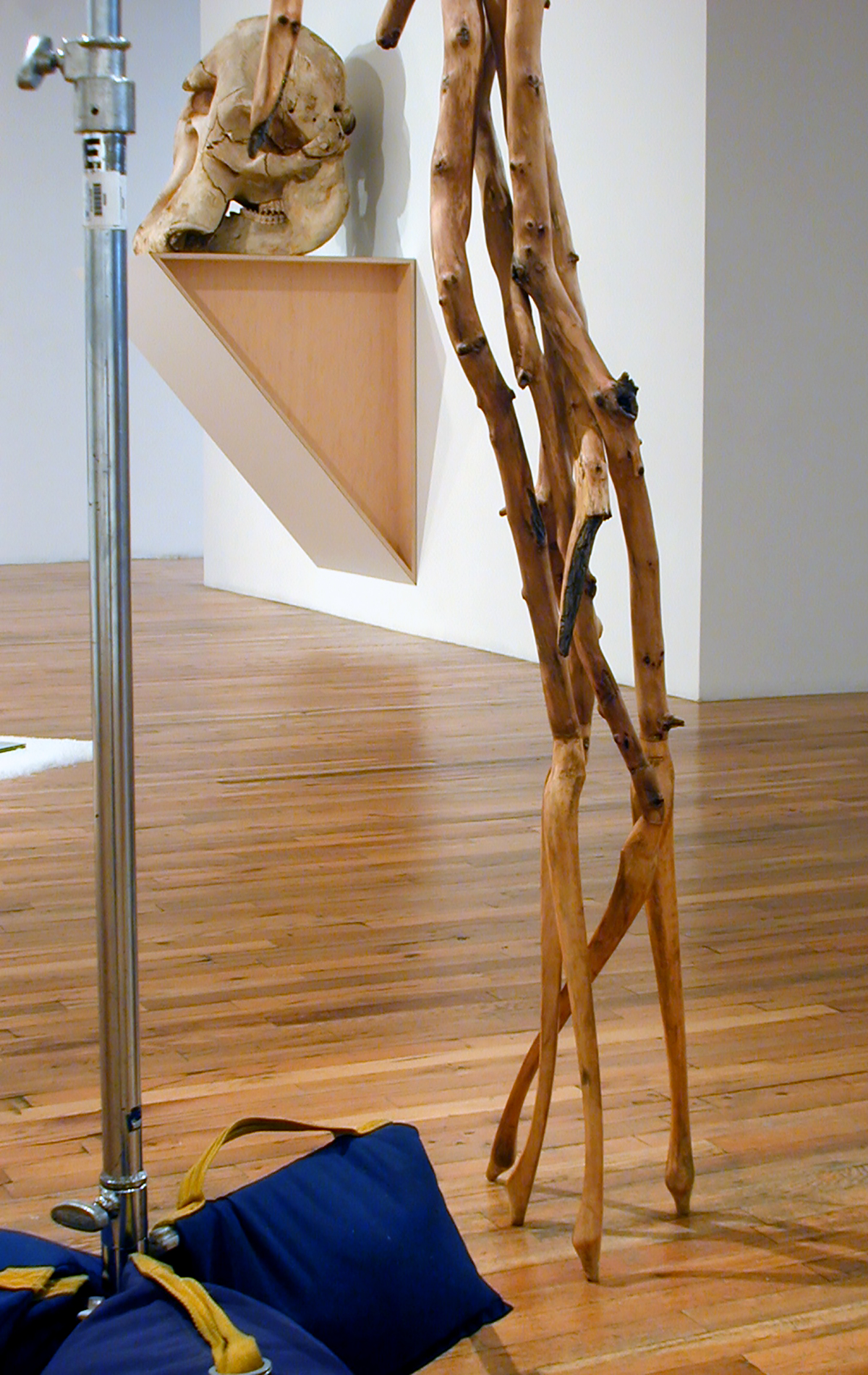 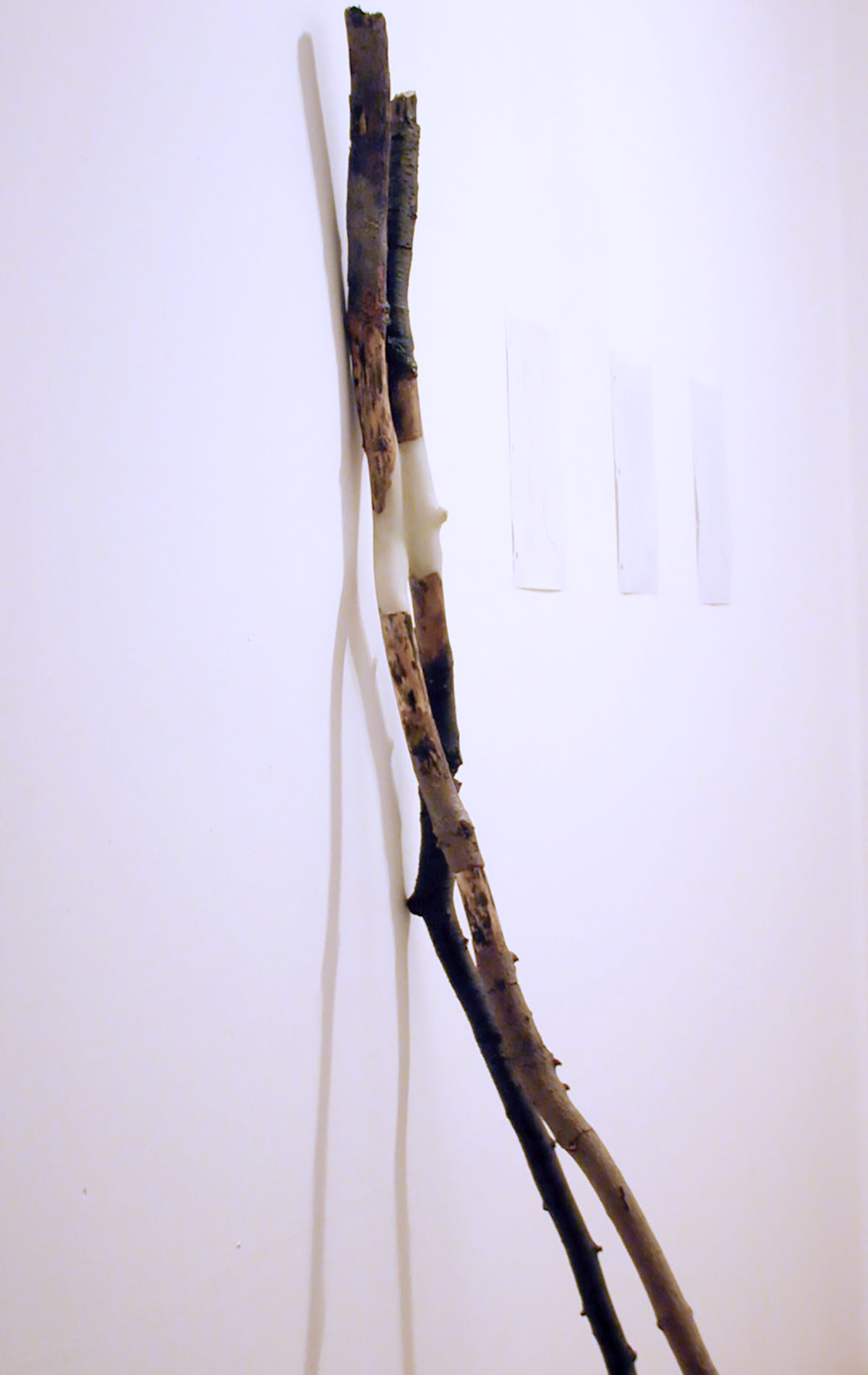 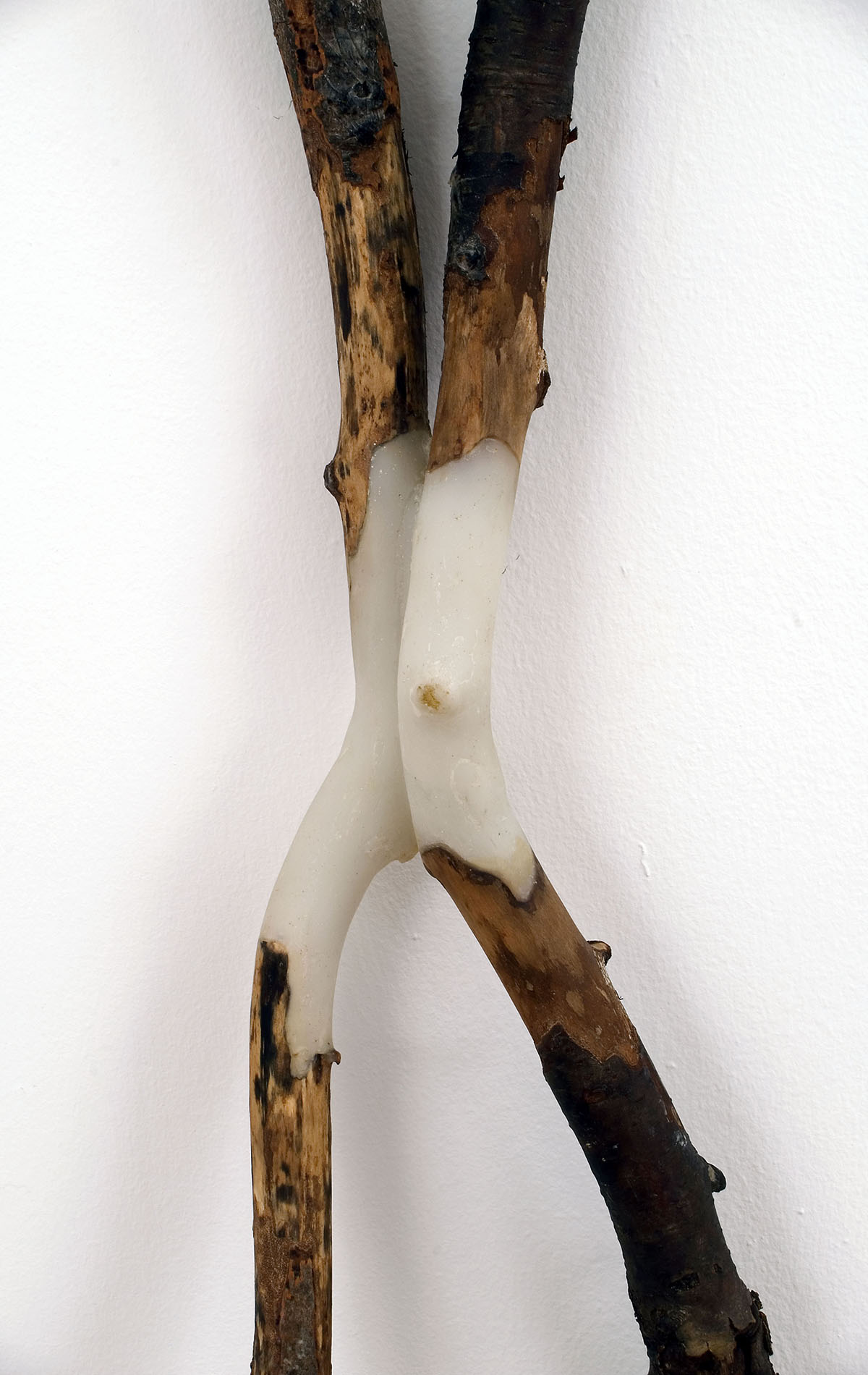 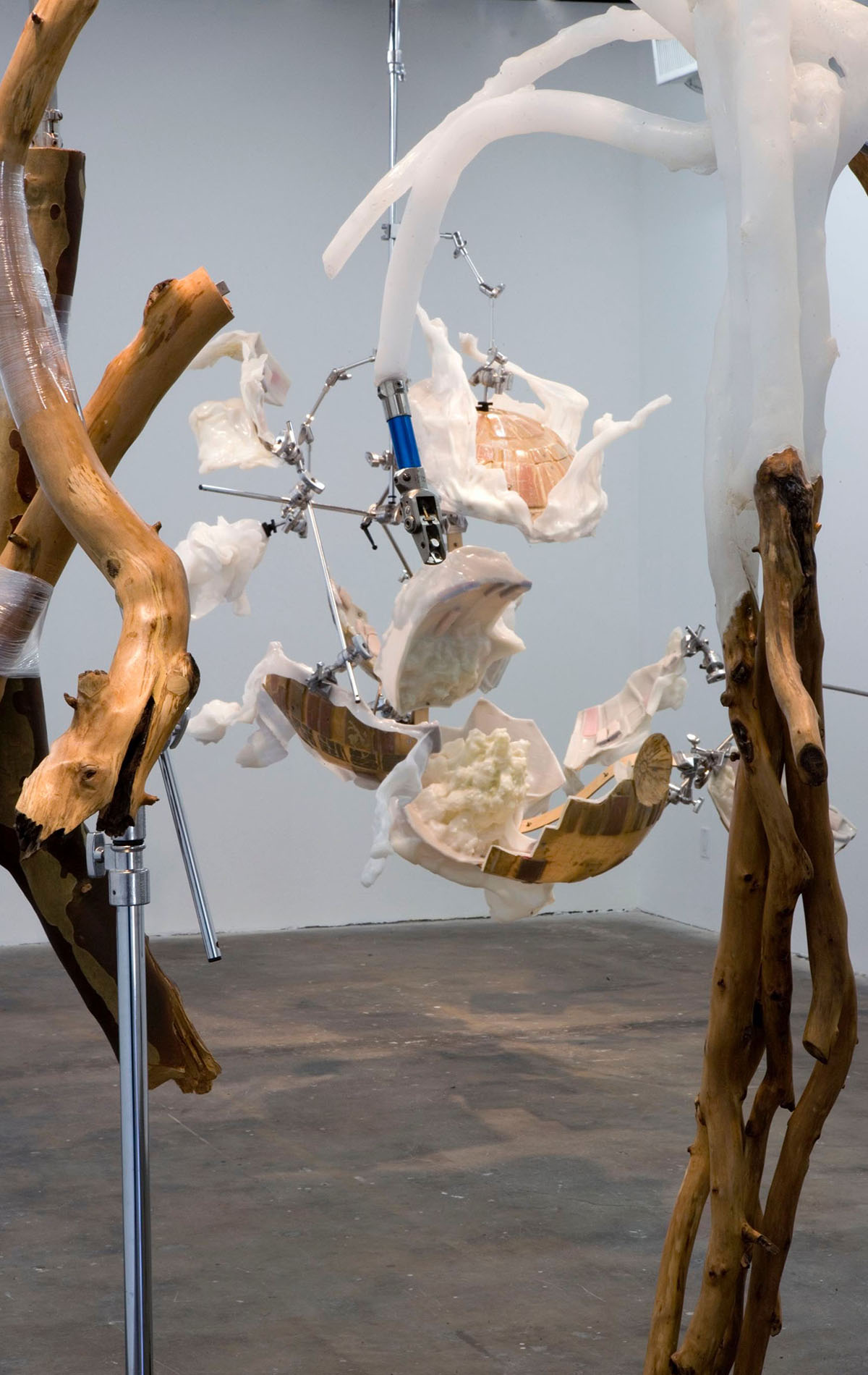 "Michelle Lopez’s Crux consists of recombined Sycamore branches, grafted with cast prosthetic plastic branches and metal prosthetic limbs. Lopez constructs a pastoral cyborg, whose structure is reminiscent of Goya’s Disasters of War etchings in which the landscape has been victimized by war and erosion. At the base of Crux, Sycamore branches seamlessly evolve into furniture legs. The sculpture’s elements physically depend on their own gravity; an artificial fusion occurs when the branches conjoin alluding to their codependence. When two branches touch, they become plastic-seeming more advanced and more mutually reliant at the same time. Lopez’ subversion of prosthetic plasticity and machined steel allows Crux to enact impossible, limb like bends and bifurcations. Lopez’ choice of 'prosthetic' plastic examines our impulse to fill absences and biological voids, questioning what is considered to be real, necessary, artificial, beautiful, grotesque, machined, or natural. Crux also alludes to crowd mentality, with its moments of sweeping convergence paralleled by limb-like sagging and fatigued separation. Crux manifests what Jameson expressed as 'something like an imperative to grow new organs.'

As an exhibition, Nina In Position attempts to confront and dismantle an aesthetic predicament described by artist Michelle Lopez in her essay on sculpture titled Exit Music (For A Film), 'a condition evident in the supremacy of rhetoric-when content moves into the realm of language to cultivate meaning.' Nina embodies an alternative to the labeling of objects, forms, identities, politics,aggregates, communities, and persons as 'ITs' and 'THINGs.' Emblematize new modes of presence, the presented artworks challenge America’s position in the world, indict constructed and mediated identity, and investigate notions of lack. Nina In Position harbors artworks aimed at complicating othered paradigms of representation, presenting complex constructions of alterity, and whose conceptual apparati serve as an addition to the discourse on the omnipresent Culture War embedded in contemporary visual culture."