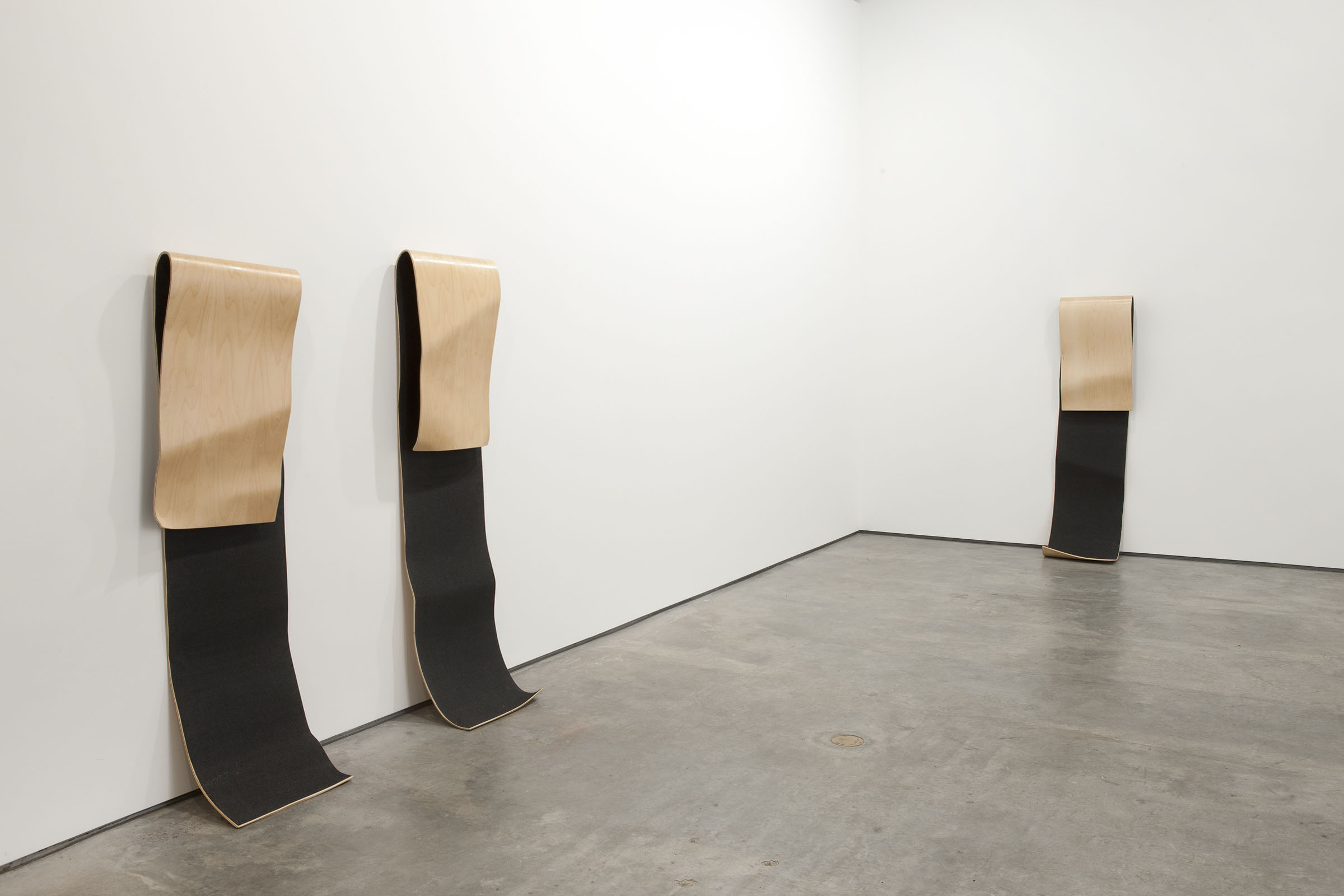 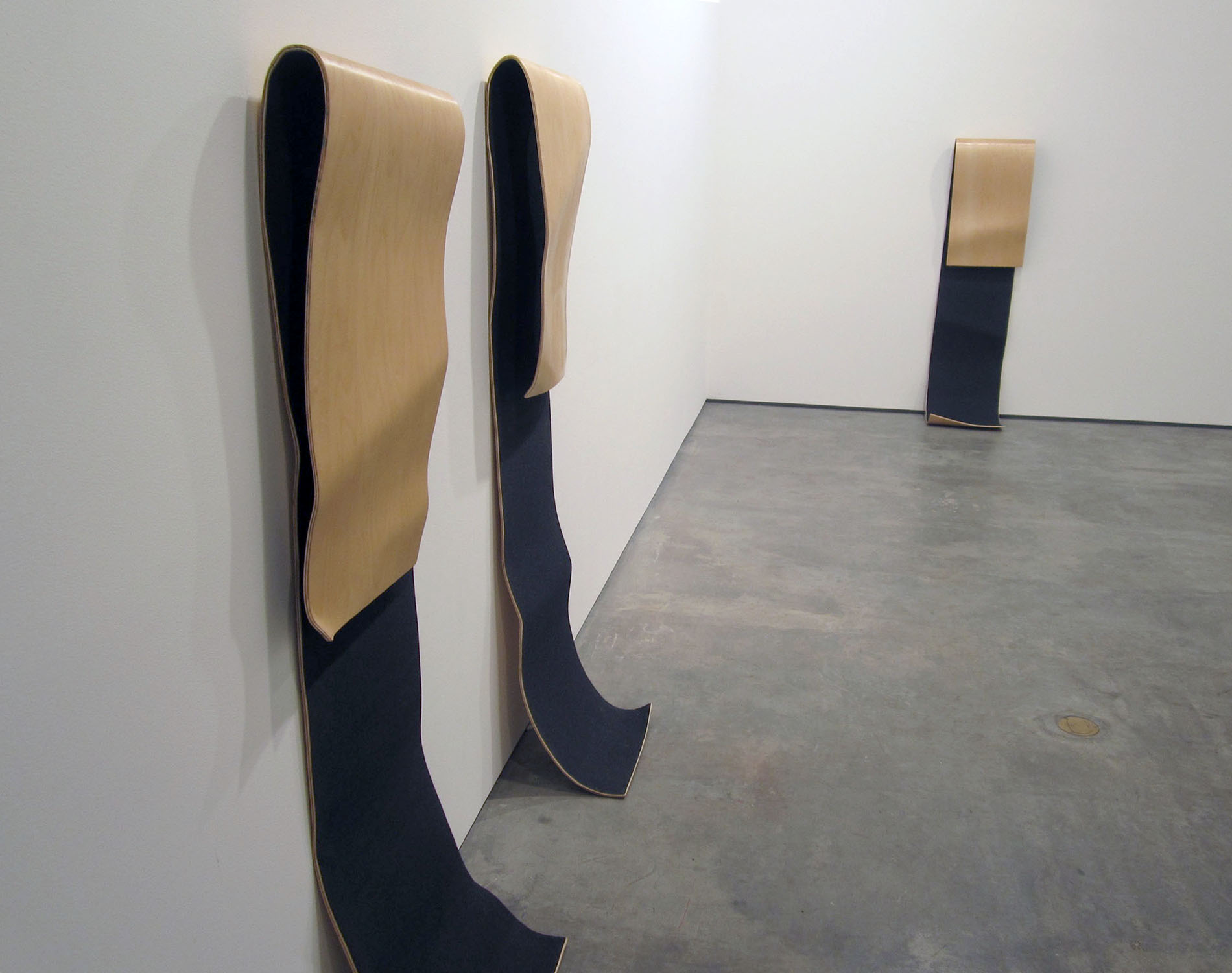 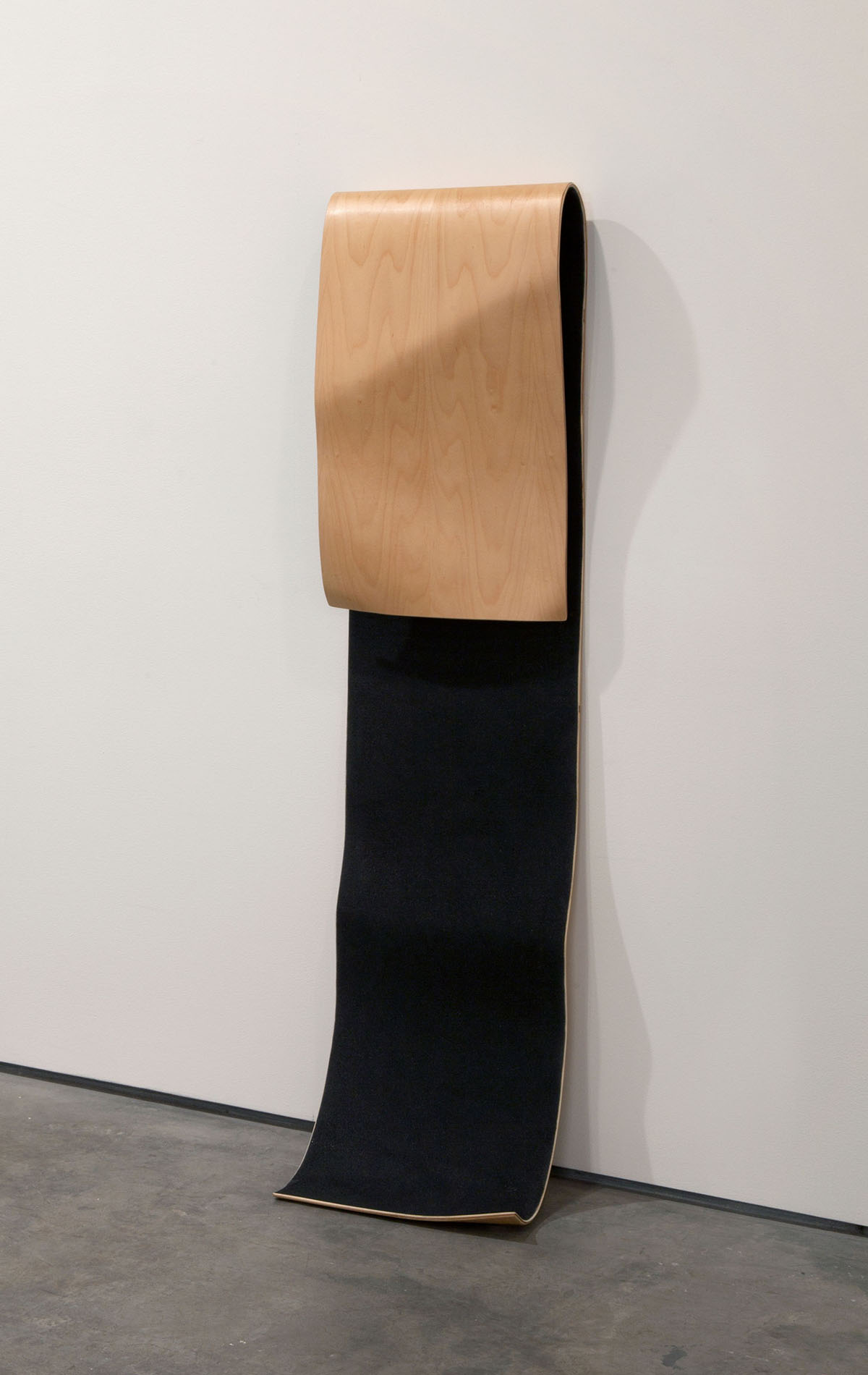 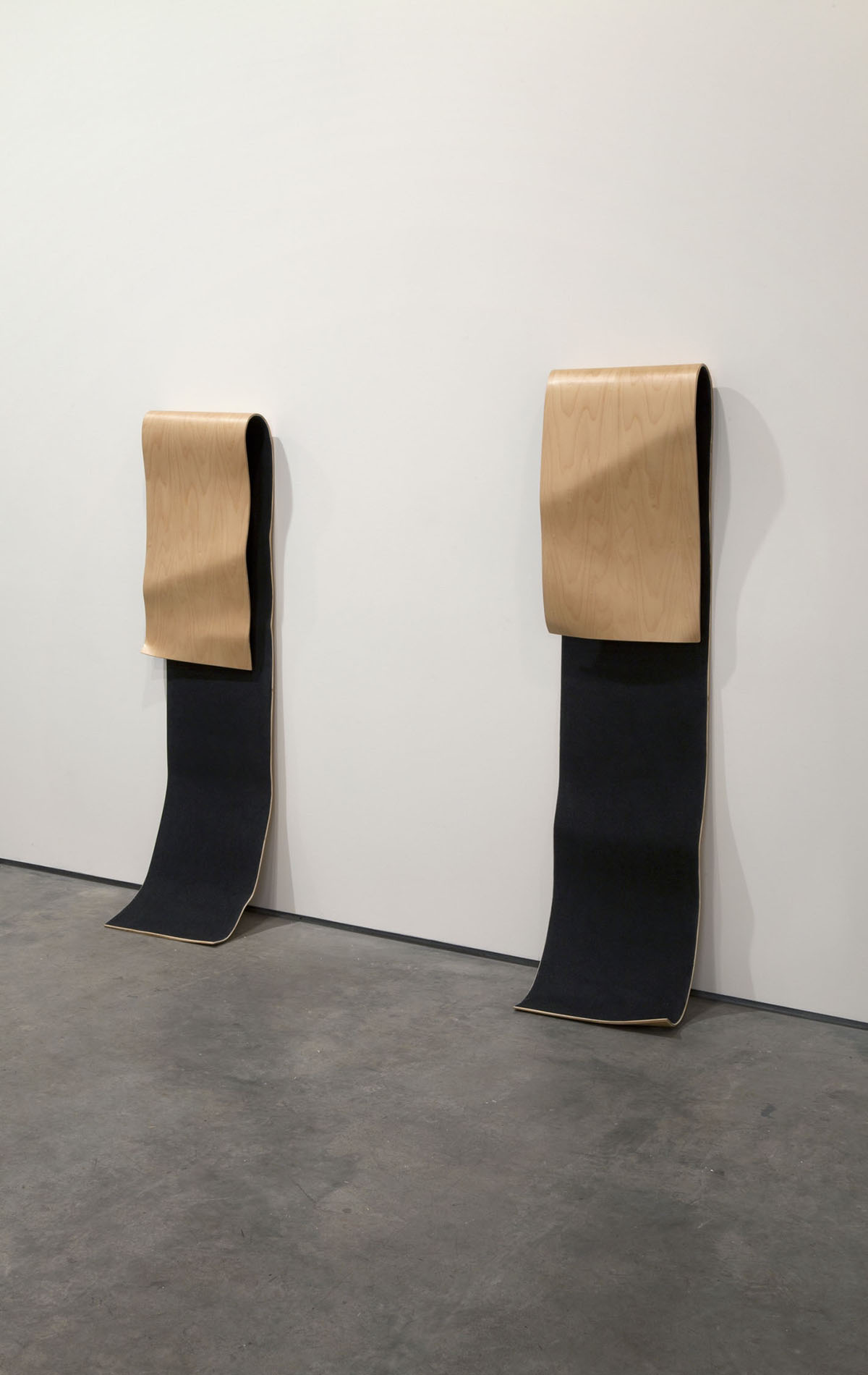 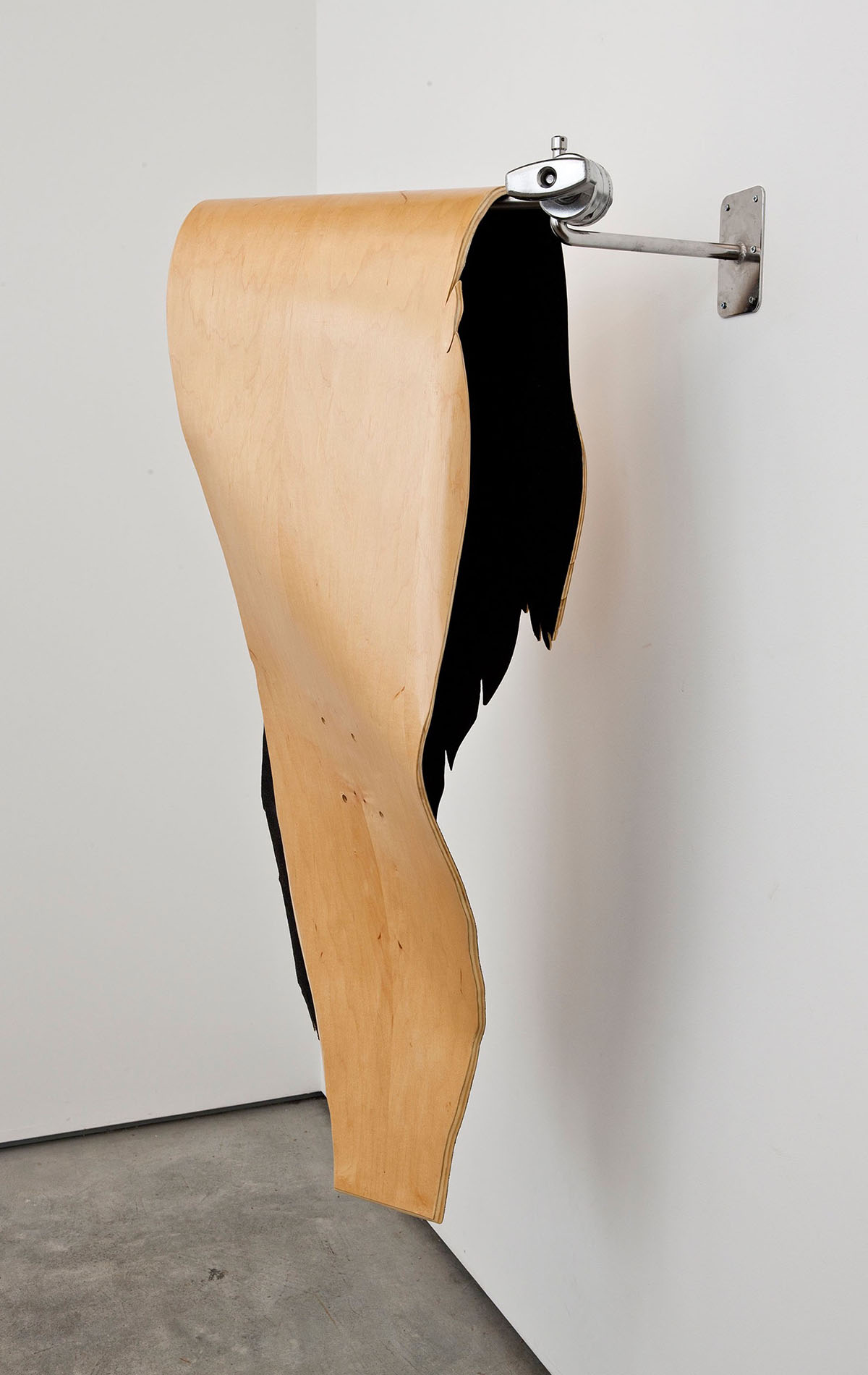 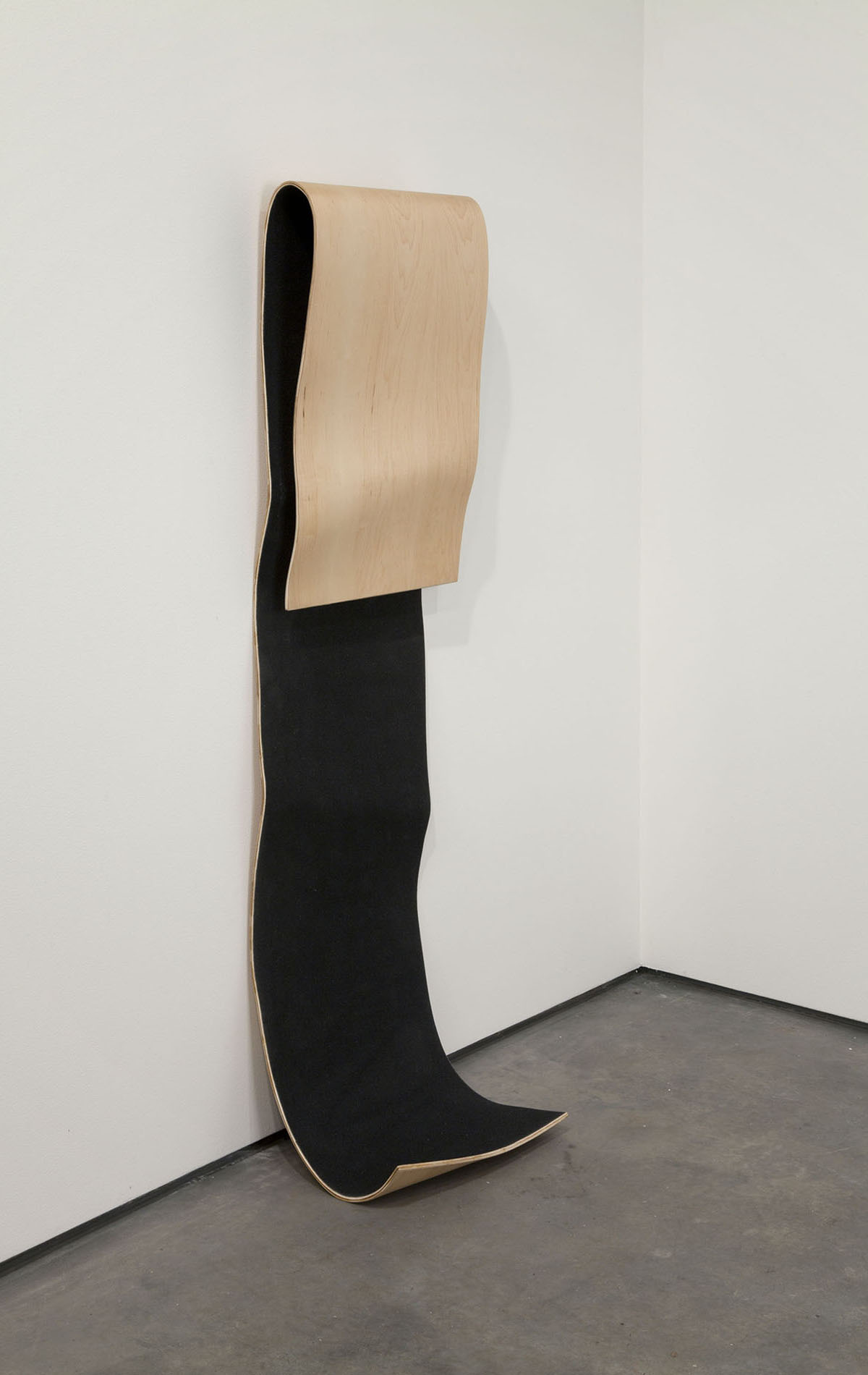 ML: I recently made a wilted plywood skateboard that was part-feather, part-petal, called Your Board. It continues the idea of deflating cultural vehicles of speed, in this case, the boyhood ride. I wanted to question “speed, flight, triumph” by forcing the “rigid” board to become impossibly flaccid. It is another “crash,” but one with contradictions: what is soft is hard, straight is sagging, ephemeral (feather) is wood. I also wanted to expand on the wilted petal/wings theme from Death in Venice (2008), a piece I made out of porcelain. The thing that I really enjoyed about Your Board was doing it all on my own—bending the plywood and determining the form without the help of assistants. I found it to be very meditative and much more rewarding. It felt a lot clearer in my head.

ACR: Tell me about the title. Does it have meaning for you, like your other titles?

ML: Your Board implies that I am yours. I wanted this to be a commentary on ownership, on magnifying reality, the sense that the audience could have ownership of my identity — take me as woman, artist, whatever you need me to be, but also a real self-portrait about the desire to disappear or be a shadow. The board at times looks like a silhouette or a shadow. But by making it and putting one intervention in, I wanted to redeem or repair something — much like The Violent Bear It Away. I am also working on a wallpaper explosion using flocking material, an anime wig cast in cement that blends with the floor, a video called Meditation on Legs, and a large wilted petal/feather that hangs on the wall,another stick piece called Golden Crown A lot of the new work is about disappearance. If the work in The Violent Bear It Away was about exploding or destroying the objects/sculptures, the recent work is about having them disappear.

"I exploited the materiality of a skateboard by making otherwise rigid plywood wilt like paper. Akin to my earlier gesture of covering a car in leather to tamper with its objectification, the board becomes another body to deflate. At human scale, the skateboard is rendered as a figure that is ridden on, skinned, hung, and yours. I soaked and then scored rigid plywood, enabling me to bend it in unusual ways: imitating wet paper hung up to dry and achieving a flaccid quality for a normally stiff material. For the majority of my process, I involve myself in the construction and craftsmanship in order to listen to where the figure/sculpture needs to go both conceptually and also intuitively."